In trying times, sometimes laughter really is the best medicine. It would seem that some of the leading filmmakers of today have taken that to heart and have also embraced the idea that a certain form of laughter laced with sardonic wit will go down particularly well. Toronto this year is overflowing with dark comedies and a couple days into the festival, they've all been pretty damned good. Here are a few words on some of the more notable dark comedies to already unspool at the fest. 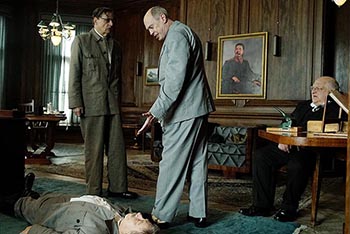 Clearly the old adage about life imitating art is alive and well in the current political climate with the ridiculousness of a show like Aramando Iannucci's Veep seeming somewhat banal. But that wonderfully dark and hilarious tone that Iannucci struck with the first few seasons of that show is every bit on display in his new feature The Death of Stalin. This hilarious film is part history lesson, part succession drama, and part comedy of errors set in the upper echelons of the Soviet Communist hierarchy in the tumultuous early 1950s. The film stars Steve Buscemi, Jeffrey Tambor, Michael Palin, and Simon Russell Beale as the unapologetically English-speaking versions of the Commie luminaries who will stop at nothing to consolidate their power after the Stalin kicks the bucket. Rupert Friend and Jason Isaacs both make wonderful appearances as important side characters but the real glory goes to the razor wit of the leading actors who have seemingly bumbled their way into power. Surely this has absolutely no relevance to any current political leaders at all.

It's pretty well accepted that no one does dark better than the Coen Brothers and while it took a number of years for their screenplay of Suburbicon to find a home, it makes a lot of sense that it would eventually be directed by George Clooney. What's perhaps more surprising is that the frequent collaborator on the acting side didn't direct a script from the Coens earlier. Also set in the 1950s, this film that notably doesn't star Clooney himself, follows a mild-mannered executive (Matt Damon) in the idyllic hamlet of Suburbicon who gets embroiled in a plot to murder his wife (Julianne Moore) and cash in on her insurance settlement with his sister-in-law (Julianne Moore, too). And he would have gotten away with it too if it wasn't for his meddling kid (an excellent turn by youngster Noah Jupe). All of this is set to a slightly uncomfortable backdrop of the first African-American family moving in next door. Oscar Isaac, Glenn Fleshler, and Alex Hassell also shine in this renditions of the Coens work that feels like it could have been directed by the brothers themselves. 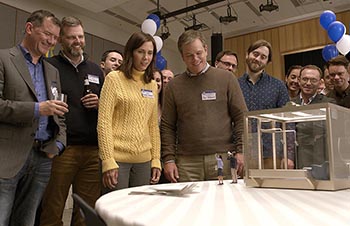 If one big fancy Matt Damon movie wasn't enough, the first few days of TIFF also featured the next stop for Alexander Payne's Venice-premiering and Telluride-dividing Downsizing. This follow-up to Nebraska by one of the directors who walks the line between comedy and drama best (see: every movie directed by Alexander Payne) proves that the long four years since that movie premiered were worth the wait. Here Damon plays a man who shrinks himself to a few inches tall to join the popular movement of people reducing their size ostensibly to save the planet (but perhaps more accurately to indulge in their over consumptive impulses with less guilt). The film does not shy away from symbolism as it moves from relatively disparate act to act. Like many of the successful films at TIFF, it also relies heavily on an excellent ensemble that includes Kristen Wiig, Christoph Waltz, and, most notably, Hong Chau. Divided critics be damned, Downsizing is a storytelling feat from a true master and, perhaps more importantly, is a just hell of a lot of fun.

IFC will be releasing The Death of Stalin this fall while Paramount is set to release Suburbicon October 27 and Downsizing December 22.

Do you feel this content is inappropriate or infringes upon your rights? Click here to report it, or see our DMCA policy.
ComediesFestival dispatchesGeorge ClooneyMatt DamonTIFFTorontoToronto 2017