Review: In THE PERSONAL HISTORY OF DAVID COPPERFIELD, Charles Dickens Gets an Update 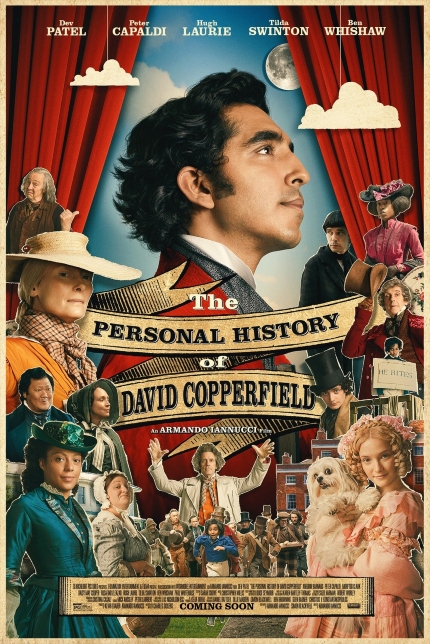 First published in 1850, Charles Dickens' eighth novel incorporated a number of events and characters from his own life, to the extent that it's been described as an 'autobiographical novel.' Adapted multiple times for the stage and screen, it's now been fashioned into a fresh and diversely cast comedy-drama with fantastic elements by writer and director Armando Iannucci.

Surprisingly, it's still suitable for a family audience. Known for his sharply provocative and often profane observations on modern cultural and political mores in series such as I'm Alan Partridge and The Thick of It, Ianucci made his feature debut with the similarly-themed In the Loop (2009) before returning to the small screen to finish up The Thick of It and then create, write and produce Veep.

He followed that with a dive into 1950s Russia that still felt quite modern, though perhaps less relevant, in The Death of Stalin (2017), proceeding onward to the HBO sci-fi comedy series Avenue 5, which felt somewhat creaky and even predictable.

In between those projects, however, he adapted Charles Dickens with a fresh approach. The Personal History of David Copperfield debuted at the Toronto International Film Festival in 2019 and plays very well today, to a great extent because Ianunnuci and his co-writer, frequent collaborator Simon Blackwell, avoid obvious temptations to nod and wink to modern audiences while recreating the ignoble, often ugly historical sins of Great Britain.

Dev Patel embodies the character of David Copperfield as an adult, first introducing his own story to a large audience in a public reading of the novel. Patel captures the sunny disposition of the character, who remains optimistic despite the most challenging, aggravating trials imaginable, including abuse by parental figures and child labor in a factory, eventually growing into an accomplished person of some distinction, thanks to his perseverance and tolerance of the faults of others.

The cast is dotted by familiar faces who find joy in bringing new comic life into their storied characters, notably Peter Capaldi, Tilda Swinton, Hugh Laurie, Benedict Wong and Ben Whishaw. It's also lovely to see Dev Patel in a starring role, making the most of an opportunity to reveal more of his light and subtle shades of dexterity.

The pleasant surprise for me came in the form of Rosalind Eleazar, who manifests finely-detailed degrees of a 19th-century personality in Agnes, making for a splendid big-screen debut after some years of work on television.

All of this plays out at times unevenly, but always vigorously, in Armando Iannucci's version of a British classic: hard work pays off, but be sure to make it look easy.

Review originally published by Dallas Film Now; reprinted with permission. The film is now playing in select U.S. theaters and will expand further on Friday, September 4, 2020, via Searchlight Pictures. For more information about the film, visit the official site.

More about In the Loop