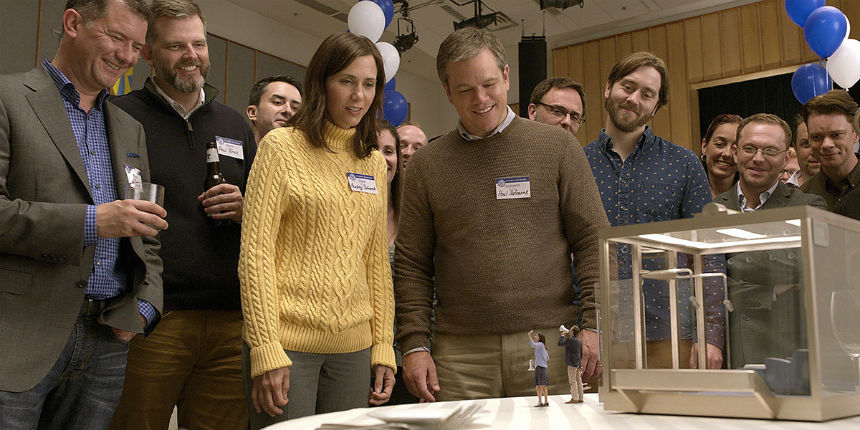 Alexander Payne's Downsizing has made stops on the festival circuit in Venice, Telluride and Toronto so far -- it will also be closing Fantastic Fest later this month -- and so it's time to take a look at its first full-sized trailer.

Matt Damon stars. Our own Ryland Aldrich just saw it in Toronto: "Here Damon plays a man who shrinks himself to a few inches tall to join the popular movement of people reducing their size ostensibly to save the planet (but perhaps more accurately to indulge in their over consumptive impulses with less guilt). The film does not shy away from symbolism as it moves from relatively disparate act to act. Like many of the successful films at TIFF, it also relies heavily on an excellent ensemble that includes Kristen Wiig, Christoph Waltz, and, most notably, Hong Chau. Divided critics be damned, Downsizing is a storytelling feat from a true master and, perhaps more importantly, is a just hell of a lot of fun."

Take a look at the trailer below. I've very much enjoyed all of Alexander Payne's past films, but it's difficult to get a grasp on the film's tone from the trailer. (Which, to be honest, has probably been true about all his films.) What do you think? Yay or nay?

Feel free to use our "Love It" or "Hate It" buttons above to signal your thoughts.

Do you feel this content is inappropriate or infringes upon your rights? Click here to report it, or see our DMCA policy.
Alexander PayneChristoph WaltzHong ChauKristen WiigMatt Damon