Have Your Say: What Is the Future of Movie Watching?

Last week, when speaking with indieWIRE, Dunkirk director Christopher Nolan shared his disdain for the way Netflix presents their original feature content, namely their lack of any theatrical window for films such as Bong Joon-Ho's Okja -- a big screen adventure in the most classic sense.

The director made the following statement: "I think the investment that Netflix is putting into interesting filmmakers and interesting projects would be more admirable if it weren’t being used as some kind of bizarre leverage against shutting down theaters,” he said. “It’s so pointless. I don’t really get it."

Nolan went on to make a point that Amazon had a stronger sense in the matter, allowing their films like The Handmaiden, Manchester by the Sea and Paterson, at least 90-day windows in the cinema before streaming on their Prime platform. When asked if he would ever consider making a film for Netfllix under the current model of distribution, Nolan gave a very resounding "No."

When it comes to the stuff of celluloid, it is no secret to film fans that Nolan is an absolute purist. He has long been an advocate for theatrical exhibition first, and above all else, so nothing he stated in regards to his feelings towards Netflix is surprising. In the weeks leading up to the filmmaker's much-praised WWII epic there were mighty declarations made across the web that the only way to view his latest work was in 70mm or 70mm IMAX.

Looking at Dunkirk's global box office debut, we find that IMAX showings accounted for $19 million of the film 's overall $105.9 million weekend haul (that's from 634 IMAX screens, with 402 of those being in the U.S.) .It's clear then that if they could, people made it a point to see the film in the best theatrical format available. But outside of big cities or regions that feature an IMAX theater adjacent to a museum, most of us don't have such an option and are left with our local multiplex. 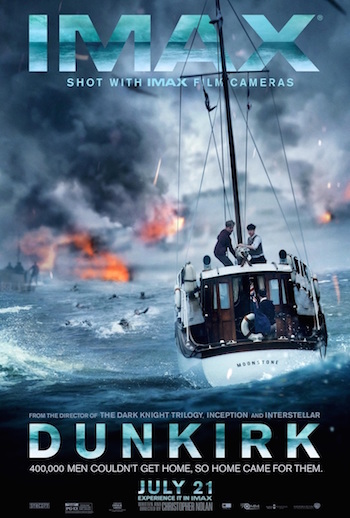 Perhaps that multiplex has been slacking as of late. Maybe the sound is cranked up well past an appropriate decibel level. Or even worse, the projector bulb is dim beyond belief, presenting a muddy and blackened image of an otherwise bright and bouncy film. Or the screen is just scratched. There's little doubt in my mind that most of you reading this article feel that theatrical presentation is important, and in this age of DCP, a dying art.

And when factoring in family, work, travel, and the sheer cost of movie tickets (+ babysitter, food etc.), partaking in an outing to the theater these days can sometimes feel less like the best past time ever and more like a harrowing gauntlet into a froth of noise and over-stimulation.

If one has the money for it, a home theater system can be a blessed experience, where each individual picture and sound setting can be under your control to the umpteenth degree.

As the likes of Amazon and Netlfix climb the rungs of a ladder once traversed by studios alone, the appeal of film watching changes. Convenience gains ground on "the experience of it". We don't dress up and go to Church as often. We pray at home, under the dim glow of our LCDs. And yet there is nothing as magical or as cathartic as sitting in an auditorium with a group of strangers, in collective awe of a great work of cinema, let alone just something to pass the time. But what happens when our desire for convenience finds us shackled to a wall? By the end of the year you will be able to see Will Smith as a cop in a Los Angeles populated by fantasy creatures likes orcs and elves. This film is called Bright. It is directed by Suicide Squad's David Ayer, and its budget is estimated to be $100 million. You will only be able to watch it on Netflix.

With today's Have Your Say we ask you what the future of movie watching is. Do we as consumers/viewers have the right to ask for a film in a particular format? Is home viewing really a lesser experience than an outing to the theater? Is Nolan's rhetoric in fact far closer to Netflix's own kind of gatekeeping than he could ever realize?

These are not easy questions to ask, dear reader, and thus, there are no easy answers. Indeed, for us cinephiles, this is one of the most complex topics of our day.

A great example of just how nuanced and strange this time of ours is lies in the fact that while I was fortunate enough to see Okja in a movie theater I also chose to watch the first season of Stranger Things on my phone, huddled under the covers late at night. Does adhering to a certain quality of presentation and format always come before the deep personal experience one may have with the work that is being watched?

I personally find such principles suspect. Is it not the job of great cinema to transcend the format one sees it on? Let's say you watch your new favorite movie for the first time on a DVD as opposed to a Blu-ray, a laptop vs. a 4k TV. That does not make it any less impactful for you. The movie has done its job. It has touched your soul. You have gained some empathy on the larger tapestry that is humanity. And if that's the case, then shouldn't leveling the playing field and allowing access to cinema of all kinds be our top priority... that is, along with better media literacy and education.

Nolan may sound elitist in his steadfast beliefs on how one views cinema. But we all have our own personal convictions on this matter. It's tricky to gauge a right or wrong here because cinema, by its very nature, is mutable in practice and presentation. That's the genius of it. At least, that's my say. Now what about yours?