Destroy All Monsters: LOVE And Dicks 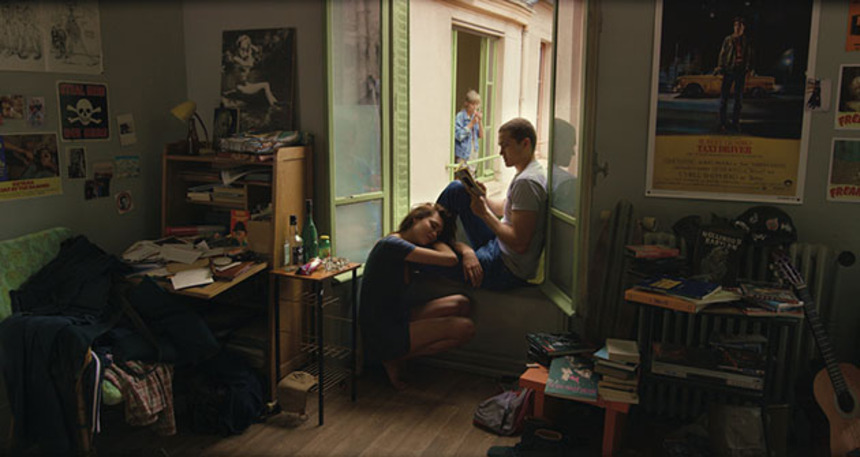 Gaspar Noe's Love is ridiculous, and I'm fairly convinced it knows it. It's a movie about dicks, which are ridiculous objects; and ridiculous people, who happen to be dicks. It's the great cinematic circle-jerk. Your mileage may vary.

There is, as has been well-documented, a great deal of sex in the movie, and the sex is unsimulated. This means that real peenies are going in real wee-wees and mouth-mouths and hand-hands. This differs from sexual activity in other movies only in that a) we know that it is unsimulated, which must mean something (right?); and b) you see dicks constantly throughout the film, which let's face it, never happens.

Mainstream cinematic sexuality is the province of the boob only. Maybe a butt if we're really taking things further. A vulva if you're Rosario Dawson.

The wang never turns up, or almost never, and certainly never erect. I heard this explained once as being because the penis is an "active organ," which in Love, it certainly is. It's up, it's down, it's here, it's there, it's firing its goo, it's shrinking back to unhappy balloon status. It's everywhere in this. It's the main image system of the film - and it's a dick.

Love makes that matter plain. There's nothing interesting about a three minute long take of a guy getting jerked off - Love opens with one - other than that it gives an awful lot of time to contemplate the fact that repetitive hand motion upon a tube of enraged human flesh, leading to an (anti-climactic?) dribble of DNA, is about as visually involving as watching a guy tool around the back yard on his riding mower.

Dicks are everywhere in Love but there are, notably, precious few vaginas. Oh, we occasionally see the tufts of pubic hair adorning the vulvas of the movie's two lead women (Aomi Muyock and Klara Kristin); but never are we granted so vulgar an anatomical gaze as we get of Karl Glusman's penis, which is omnipresent.

But by sex scene 11 or 12, one must admit the gap between the sexual activity and its storytelling value is widening, not drawing nearer. And yet, Glusman's character, Murphy, never tires of the opportunity to whip out his dick on camera; and neither does Gaspar Noe himself, who turns up late in the game as a lunatic art gallery owner and sometime hedonist.

It was around that point that I realized that Love was certainly ridiculous enough to be in on its own joke.

All right, this latter part may or may not actually have been part of the strategy. I'd like to give the film the benefit of the doubt and assume that all the intercourse is about more than just a XXX-rated gloss on that Eric Idle character from Monty Python, all nudges and winks and "know what I means."

Love certainly feels like a dirty joke told by a 13-year-old boy, but I have the feeling that the kid's in the advanced class, not the underperformers.

The film broadly, openly claims to be based at least in part on the desire by the filmmaker (represented in the film by Murphy, who is a filmmaker and has a son named Gaspar - the writerly equivalent of the wanking that opens the film) to capture onscreen the transcendent emotional connection of sex with a person you truly love.

If I'm right, above, about onscreen sex and sex in general being largely boring to nearly anyone who isn't having the sex itself, this is of course a futile, meaningless artistic goal. Love is shot in 3-D, but would need to be shot in 3-D high frame rate smell-o-vision with the benefit of a whole host of other "immersion" technologies yet to be invented to be able to come anywhere near its ostensible purpose as a cinematic work.

What we're left with, then, are the dicks.

I repeat: dicks look ridiculous, especially when erect, as they wobble around pointing uncertainly at targets near and far like the brainless dumbsticks they are. Since Glusman's penis is nearly a supporting actor in this movie, it's not long before penile omnipresence in Love seems to be the driving... er... thrust of its image structure, and the haplessness of the penis itself - the straining fury, the impotent rage! - the real answer to the questions the film asks.

For the most part, Noe shoots Love in remarkably purposeless 3-D. He shoots in flat planes and simple, 2-dimensional compositions which are enhanced not at all by the stereoscopic effect.

And then, as if to underline the degree to which the whole movie is little more than a highly sophisticated, 150-minute dick joke, the second act ends with two rapid-fire "money shots" - one literal, one slightly more demure - in which erections are pointed directly into the 3-D camera and thereby bulge outward into the waiting eyeballs of an audience who might, theoretically, have only come to this movie in the first place for this exact experience.

The first dick is Glusman's, and it ejaculates straight into the POV camera. The second dick is Noe's, and it just stares at us, raw and reeking.

Tell me that's not a joke.

Do you feel this content is inappropriate or infringes upon your rights? Click here to report it, or see our DMCA policy.
Gaspar NoeLoveTIFF 2015Gaspar NoéAomi MuyockKarl GlusmanKlara KristinUgo FoxDramaRomance