Review: LOVE, Much More Than A Gimmick 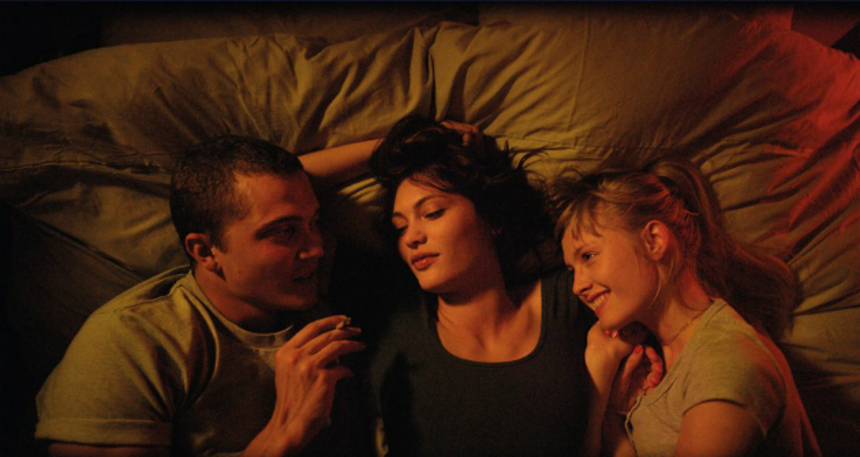 Gaspar Noé. For some even the name sends shudders. Thoughts of the visually bombastic Enter the Void cause a kind of PTSD, and his Irreversable still haunts some 13 years on. The Argentine-born, France-based director occupies a unique and stratified position as enfant terrible at the age of 51.

So when carnal posters started appearing for Love, one showing a dramatic and hygienically dubious ménage-a-trois kiss, another showing a cake-and-icing vignette involving a hand and a phallus, the likelihood of getting something subtle wasn't quite what audiences would be queuing up for.

It's thus somewhat surprising, then, that Love plays almost restrained. Under all the trappings and gimmicks, this is a very simple (and at times quite effective) story about a man reflecting upon his choices and his past, aching for a love lost due to fleeting bouts of lust.

So, yes, this is coitus caught in 3D, but the often superbly-rendered scenes fairly quickly become almost routine. The film, despite its disjointed chronological structure that echoes quite well the best moments of Irreversible, feels completely coherent, the jumps in time a lovely way of getting inside the head of the protagonist Murphy. The name is also not exactly subtle, and if you missed the point, a giant card comes on the screen to remind the meaning of the law where if something goes wrong it will. The character named Elektra is accused of having "Daddy Issues", the Noé guy is controlling and obsessed with young, beautiful people that he can exploit. Only Omi's name is a bit opaque --the word is the name of a protein, an ancient Japanese legal system, or the language spoken in the Congo -- though I assume this is simply more narcissism, as calling out her name would, of course, be a homonym of "Oh...me!"

As we go back-and-forth in Murphy's head, finding connective threads between the violent and brutal (but true) love he had for Elektra, an adoration only felt now for his daughter by Omi, we're led through a Dante-like circle of various hells. Out the other side is misery and crying in a tub, but along the way we can at least revel in the flourishing of young love, appreciate the athleticism of their passions, and feel, at least momentarily, for the humanity of their connection.

After a while, though, you find their small-minded conversations meandering, their supposed drive to be artists obnoxious and mere fronts to mask their insecurities (yes, of course, the man doing the fucking is a film director with posters of Birth of a Nation and Salò on the walls of his apartment.)

Salò is an interesting comparator, actually, because decades on, even its shock value has diminished, even if its illustration of the barbarity of the time of the fascists has not. Noé's film doesn't have the same kind of ambition, but stripped down as naked as the lead performers, you're left with a film not about carnal lust and the hungers of youth but, yes, a film about love, about true connections and how the loss of them can drive one mad.

Thus, there's quite a bit to admire about the film, aside the gimmick. One believes fully in the characters' choices, even if they're often appalling. One believes that these characters would connect, even if spending time with them in real life might cause one to contemplate murder. Love is the stuff of love, a smattering of half-baked conversations, screaming matches, physical thrills and misguided adventures.

Love is messy, but the film is not. Noé has crafted something both engaging and raunchy, a balance that I must admit is one I feared he'd not be able to pull off. In contrast to his last film, he's dialed his cinematic obnoxiousness down to a finely honed point, never letting the shtick get in the way of the point.

Love is a strong film, perhaps stronger than some will notice aside from the writhing bodies. These are attractive and superficial people getting it on while trying not to be shallow, and that in its own way becomes quite profound.

Who knows what happens to the film after its Cannes debut -- like some of the cocks it'll no doubt be cut for some sort of palatable consumption -- but its excesses are surely part of both the allure and the success of the work. It's all there exposed, from the rawest of emotions to the stickiest of ejaculations, and it's this exposure that one genuinely feels leads you into a deep penetration of the soul of Murphy.

So, yes, the film is much more than a gimmick. It may well be the sweetest film Noé has ever made, and its closing shot might actually demonstrate just what Murphy's consistent failures has stumbled upon, that love can indeed be found again, and perhaps maybe even in a purer form.

Review originally published during the Cannes Film festival in May 2015. The film opens in New York City on Friday, October 30, before expanding to select theaters in the U.S. on November 6.