Destroy All Monsters: SICARIO And The Heart Of Darkness 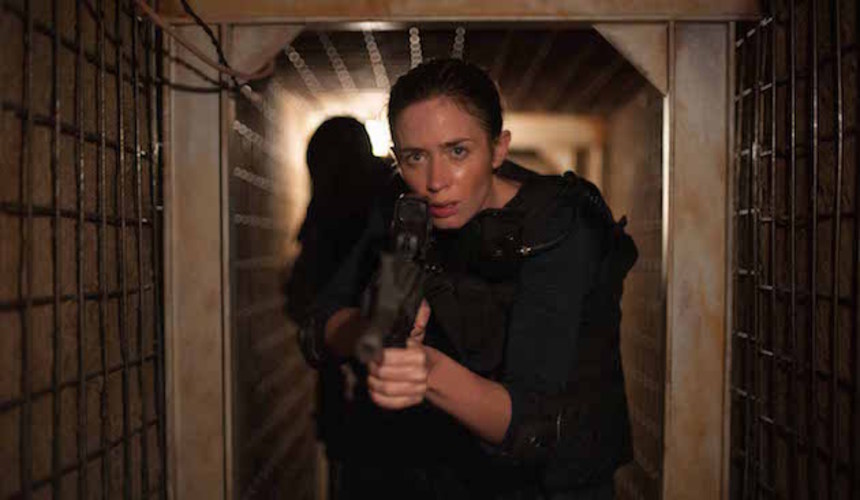 I admire a genre movie that extracts its generic components so completely that one nearly forgets what one is watching until it sneaks back around and kicks us in the ass. One such film is Sicario, Denis Villeneuve's revenge thriller, which the director slow-plays like a master poker player.

That the movie is a revenge thriller at all is the first of its feints; it presents as a straight cartel war movie until fairly deep in the run time, very nearly at the point where Alejandro (Benicio Del Toro) strides into the Juarez kingpin's home and executes his whole family.

Which is not to say that the strategy is not hidden in plain sight - the movie is called Sicario after all, and informs us before the title appears that the word means "hitman," before conveniently forgetting to seem to be about a hitman in any way, shape or form for the next 90-odd minutes.

Only at the climax does the true contour of the narrative become clear, and along with it - for us as the audience, and for the film's lead character Kate (Emily Blunt), who has literally been left behind at this point in the story - the fact that we've all essentially been patsies in Alejandro's maneuvers to arrive at this apolitical, amoral point.

This is great anti-mythic mythology. The movie is playing in archetypes as old as blood, but does it in so unornamented a fashion that it's not just possible, but entirely required, that we miss the film's thrust till we're deeply implicated in it.

This, too, is true of Kate. She is the film's ostensible main character, the young law enforcement agent frustrated with the limited reach of her jurisdiction, looking to extend that reach a little further by partnering with a government task force on a mission to the Mexican border to bring down the cartels.

This is a Faustian bargain from the outset, and we (and she) might even realize it. But in a classic bit of thinking that we might just as well go ahead and brand American at this point, the ends are presumed to justify the means till long past the time at which the means have extracted more cost than Kate has bargained for, at which point it is - of course - too late.

Blunt's character starts smoking again in the film. It's an old piece of cinematic code, easy shorthand for "this is taking a toll on me, this is making me something I would rather not be." At first there's an apologetic quality to Kate's smoking. She is bumming smokes off the men in the task force and swatting down her partner's questions on the subject like a spouse who agrees with his reasoning completely but just doesn't want to hear it right now.

In the second-last scene in the movie, though, she's just smoking, alone, on her balcony; resigned, humbled. It's gotten inside her, because she let it; because at some point in the movie by choice or by blind ignorance, she decided to admit evil into her life, and now she can't ever get it out. Her cigarettes are the vaporous equivalent of Lady MacBeth's damned spot, albeit with the attached non-verbal admission by Kate that there's no longer any point in scrubbing.

That same second-last scene has Del Toro's Alejandro arrive at Kate's home, to force her to sign - at gunpoint - a report claiming that all of the activities on the mission to Juarez were legal. Roger Deakins, no slouch himself in his visual shorthand, aggressively quotes Gordon Willis in the sequence, "lighting" Del Toro in near-perfect blackness in a frame that immediately recalls the final scenes of Michael in The Godfather, Part II. Not Part I, mind you; the one where Michael is a whole film past fucked.

There's the faintest hint of an implication there, too. If we are to follow the Corleone idea, the connection suggests that at some point, Alejandro was not like this, was not a prince of darkness sitting wreathed in smoke, holding a handgun to a defenceless woman's head. He became this thing and, I think, so will Kate; with or without the mooted sequel, Sicario suggests uneasily that the metamorphosis into evil is inevitable in all of its players, and we are merely observing it at different stages.

Call it what you will - a fable about America's troubling foreign policy in microcosm, or a simple morality play about one woman's disillusionment. Sicario's strength lies in its final moments and the retroactive reassessment of the engine that brings us there, before staring unblinking into the filth that now covers every single one of its characters, even "us," through our proxy Kate. It's a chilling, unyielding motion picture, and it sticks to us after the fact like second-hand smoke on a fall jacket.

Do you feel this content is inappropriate or infringes upon your rights? Click here to report it, or see our DMCA policy.
Benicio Del ToroDenis VilleneuveDestroy All MonstersEmily BluntSicario