J Hurtado
Editor, U.S. ; Dallas, Texas (@HatefulJosh)
Tweet Post Submit
Kino International and their Redemption Films imprint continue to release quality Eurohorror films in the USA with these new additions to the line. We have one fairly well-known film among genre cinema fans in Mario Bava's Evil Eye (The Girl Who Knew Too Much), and one lesser known gem from Jean Rollin in The Escapees. Are they worth your money? I think so. 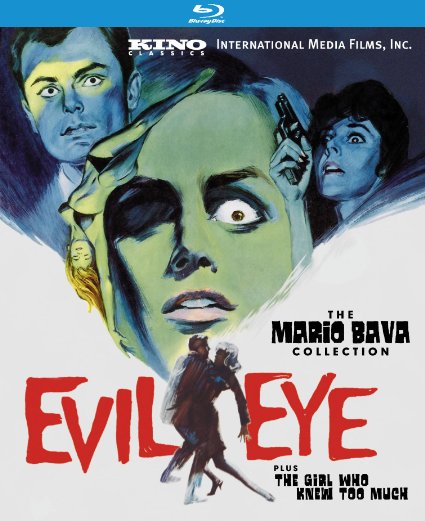 Popular critical opinion holds that Mario Bava's Evil Eye, known outside of the US as The Girl Who Knew Too Much, was the first true giallo film. This was a very popular style of film from the late '60s though the early '80s that featured a lot of shadows, thrills, creative lighting, and black gloved killers. It's the genre that helped make Bava famous, and the genre that definitely make Dario Argento famous. It is also a genre that most people who aren't hardcore film fans know absolutely nothing about.

Evil Eye is as good a place to start as any if you're curious about giallo film, but not exclusively because it is the first. It also marks a bridge between late era noir thrillers and the harder edged '70s gore fests. Bava takes from many noir conventions and adds in a generous helping of Hitchcockian misdirection in this story about a girl and a murder that may not have even taken place.

While vacationing in Italy, a young woman with a passion for crime fiction (Leticia Román) witnesses a brutal murder. With the help of a handsome young doctor (John Saxon), she launches her own investigation and uncovers a series of crimes known as the "Alphabet Murders", only to realize that she may be next on the killer's list.

The film feels like an extension of Hitchcock's The Man Who Knew Too Much, but features elements from other Hitchcock films like Vertigo, creating a sort of new blend of thriller that would go on to fuel one of Italy's most interesting native genres.

Evil Eye's black and white cinematography feels appropriate given the influences, however, for people like me who've discovered Bava from his later works, it's strange to see a film of his without those trademark lighting gels. This film was released on Blu-ray in the UK by Arrow Video not too long ago and the image quality on this Kino Blu-ray is every bit as good as that one.

Both releases also feature the US cut title Evil Eye, and the European cut known as The Girl Who Knew Too Much, as well as the accompanying English and Italian dubbed soundtracks. There is no original audio version of the film as Italian films were all post-dubbed. In addition, it's worth noting that the US version is a few minutes longer and has a slightly different tone, so the inclusion of both versions is very helpful.

The only extra on the disc is a very informative audio commentary from Bava biographer Tim Lucas. This is one area in which the Arrow Video release easily trumps the Kino version. However, if you're locked to region A, the Kino is your only choice and it's still a very satisfactory one. 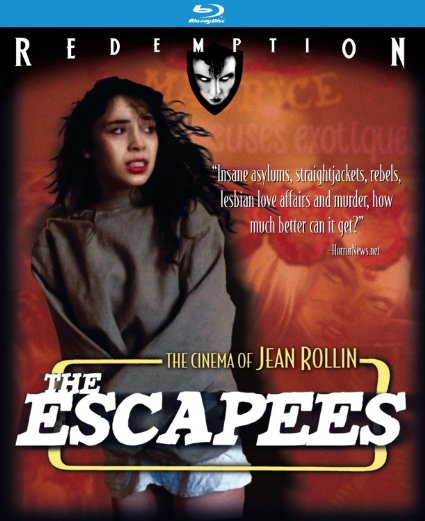 Redemption Films has made an effort to make the films of French Eurohorror specialist Jean Rollin more available in English friendly editions. A couple of years ago they ran through all of his most well known work, including his groundbreaking and unique vampire films, so the job now is to start uncovering the lesser known stuff. Among that number, we find his 1981 existential oddity The Escapees.

This film, which came immediately after the cult Nazi zombie film Zombie Lake, takes some of Rollin's more familiar themes and obsessions and just replaces the blood with mania. A pair of mental patients escape an asylum and go on a winding search of true freedom, not only from their confines, but from the world, and at times each other. Rollin's obsession with pairs of young girls is well documented in films like the late cycle Two Orphan Vampires, but those seeds were sown here, over 15 years earlier.

Rollin's films rarely dealt with single protagonists, and while there are certainly exceptions to prove me wrong, he really seemed to appreciate and enjoy exploring group dynamics. This film is a smaller scale version of his vampire films. As the girls wander through the world, encounter some sympathetic outsiders and some not so sympathetic authority figures, they not only learn about their own autonomy, but their interdependence grows, some might say to the point of co-dependence.

Their relationship is one of yin and yang, opposites who symbiotically exist and need one another. As the swerve from a junkyard exotic dance show, to a bar packed with hoodlums, to a shipping yard, to a ship on the sea, they learn to lean on one another.

The film itself is no great shakes in terms of its technical merits. The cinematography is very static, the production values are low, the acting amateurish at best, and the score is missing when it's really needed. However, I found it to be engaging. A prior knowledge of Rollin's films and style certainly helped, I wouldn't push this film onto a first timer. However, The Escapees is an interesting look into Rollin's non-horror work, of which there's not a whole lot, and how he manages to share themes across genres.

The image quality on the disc is not great. It hasn't had any significant restoration work done, but it does feel fairly natural with the presence of grain and a fairly muted color scheme. I'll take natural and muted over digitized and overblown any day of the week. The audio is similarly unspectacular but effective. The only extra is an archival interview with Rollin recorded before his death in 2010, which is interesting in itself.