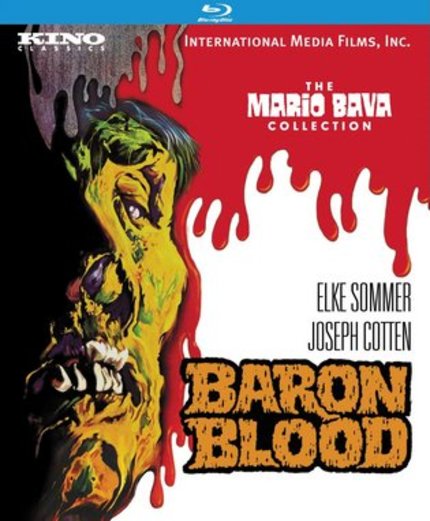 A little peek behind the curtain:

When you review discs for a website, you are often sent material in advance of its commercial release in order to drum up interest before it hits store shelves. The result for many of us is a stack of discs that we try to prioritize into manageable, bite-sized pieces. For me, that usually entails attempting to wrangle them into chronological order by release date, so I can get my reviews written in the approximate order in which the product becomes available. Once in a while, however, something exciting comes along and it jumps the queue, Baron Blood is that title.

It wasn't that this is a top ten favorite film or anything like that. It was the fact that the day after I received my copy, I saw a particularly enthusiastic post on Facebook about the quality of the disc from Tim Lucas. If you don't know who Tim Lucas is, he's the editor of Video Watchdog and one of the world's foremost authorities on '60s and '70s horror films. Lucas has a particular fondness for Mario Bava, as exemplified by the 1128 page be-all, end-all biography he completed just a few years ago. He's probably seen these films more than anyone, and when he said: "Kino's upcoming Blu-ray of Bava's BARON BLOOD looks pretty darn spectacular... [it] looks sharper and more colorful than I've ever seen it look before," well, that's pretty high praise. So, here we are, ahead of schedule I decided to take a look and see what the fuss was about.

Baron Blood is the story of an impetuous young American professor who flies to his ancestral home in Austria in search of his roots. Of course, the young professor is most interested in one ancestor in particular: the sadistic Baron Otto von Kleist, known to his enemies as Baron Blood. Not content to simply dig up dirt on his maniacal relative, professor Peter Kleist also takes a fancy to one of the keepers of the Baron's castle, played by a nubile Elke Sommer. In the midst of their flirtations, they "accidentally" read an ancient incantation that brings the centuries-dead Baron Blood out from the grave and bodies start piling up.

Not quite a slasher, but not quite a giallo, Baron Blood follows more along the lines of Bava's supernatural terrors like Lisa & the Devil, or even a bloodier version of Black Sunday. The result is one of Bava's more gruesome films, with gallons of blood and sticky looking zombie effects aplenty. The film moves along at a very quick pace, never feeling anywhere near its actual runtime of 98 minutes. There is no filler here, just one big bad killer. Baron Blood is a lot of fun, and if you don't have the patience for something quite as old-timey feeling as Black Sunday (which I would contend isn't old-timey at all), Baron Blood will give you many of the same thrills, but with the blood and guts in amazing color.

One of the things for which Mario Bava has become famous is his lurid lighting. Films like Baron Blood earned him that reputation. Corridors and dark stairwells are bathed in his signature blue and red lights, never quite looking stagey, but not quite real, either. It all lends to the air of dread and tension that permeates the film. By the time Joseph Cotten shows up, we're well in the throes of madness, and no one can quite put their finger on what's going on, but we know it's very scary.

Baron Blood is like a film trapped between two eras. The film opens a bouncy tune played against the dear professor in his airplane to Austria, but when the Baron Blood title card appears, it's a jarring juxtaposition between the words and the atmosphere. That's what the film is like. Bava takes the tried and true gothic horror setting of the ancient castle and infuses it with modern conveniences and nuisances. In fact, one of the funniest sequences in the film shows the main characters touring Baron Blood's torture chamber to the pre-recorded screams designed to turn the castle into a macabre tourist trap. This could have been terrible, but Bava was no fool and he balanced the gothic and modern feels very nicely. Baron Blood is a winner!

Here's the real test. It's been many years since I've seen Baron Blood, probably 15 since I saw it last on VHS. Undoubtedly this version will be head and shoulders above that one, but how does is stand up on its own merits? Quite nicely. The opening shot of the film, a blue sky, is absolutely riddled with dirt and dust, presumably from the camera lens, however, beyond that there is very little intrusive dirt to be found. The colors are amazing and the fine detail looks wonderful, except of course when the camera's focus was dubious to begin with. Bava's colors look amazing, and the detail and grain structure are very pleasing, a nice sharp image with a bright and contrasty look is all I needed, but this exceeds any of the other Bava Blu-rays from Kino so far, in my opinion. The audio is fine, but nothing special. The mono track doesn't do any tricks, but it gives us clean and clear dialogue, which is exactly what the film needs. The A/V presentation here is top notch!

There are precious few extras on the disc, however, luckily the archival Tim Lucas audio commentary remains in tact. In addition to his erudite and well-prepared (if a bit rehearsed) remarks, we also get alternate opening and closing credits in Italian, and a half dozen trailers for other Bava films in Kino's collection, all of which have been on previous releases, topping it off are some radio spots. Nothing terribly in depth, but that's about par for the course with these Bava releases. Honestly, as good as the A/V is on this disc I am satisfied, however, if a company like Arrow wants to release a special edition with bonus materials and the same transfer, I wouldn't hesitate to upgrade. That's not on their schedule, though, so Kino is the best release of Baron Blood in the world. Definitely recommended.