Blu-ray Review: A BLADE IN THE DARK, From 88 Films 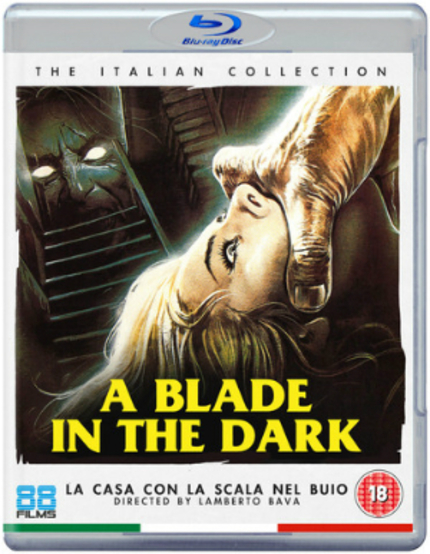 Director Lamberto Bava is probably most famous for being the son of legendary Italian director Mario Bava. The elder Bava is one of those filmmakers whose work is ubiquitous among hardcore horror fans, but his reach beyond that is minimal.
Nevertheless, his influence is responsible for a huge portion of the Italian horror and thriller output of the '70s and '80s, and by extension has influenced filmmakers for decades beyond. So, understandably, Lamberto Bava has had some very big shoes to fill in his career, and he can hardly make a move without someone reminding him of the legacy he represents.

One of the greatest achievements of Mario Bava's career is the creation of the giallo, a uniquely Italian substrand of the thriller genre that focuses on mystery, blood, and sex in a more visceral way than previous thrillers had. As such, it was only natural that Lamberto Bava would attempt to step into his father's footsteps and add to the Italian giallo legacy. One of Lamberto Bava's more successful ventures in giallo is 1983's A Blade in the Dark (La casa con la scala nel buio), a film brought to new light as part of 88 Films' Italian Collection.

A Blade in the Dark traces the story of a film composer drawn into a web of mystery and malice after he rents a house and everyone who visits him begins to die violent, bloody deaths. The composer Bruno, played by Andrea Occhipinti (Conquest), is scoring a thriller that is being directed by a female friend of his. In order to isolate himself so he can work, he rents a villa from a friend that is subsequently visited by several women, mostly friends of the mysterious prior tenant, Linda.
One by one these women disappear, leaving Bruno in the dark about what is going on with the villa, until he starts to notice similarities between the film he is scoring and the real life danger in which he finds himself. As the dominoes continue falling behind him, Bruno must escape so that he doesn't become the next victim.

Lamberto Bava's A Blade in the Dark came relatively late in the giallo cycle. These films, which most scholars agree began with Mario Bava's The Girl Who Knew Too Much in 1963, were a staple of Italian cinema through the late '80s. However, the vast bulk of the films that fall under this umbrella released during the '70s, at which time they made superstars of directors like Dario Argento, Sergio Martino, and Lucio Fulci, all of whom graduated from Italy's fabled Spaghetti Western films.
As a result, the giallo moved from being moody thrillers to violent splatter films, just like the rest of the related genres moved from atmospheric to visceral experiences. A Blade in the Dark fits well among this later crop, though Bava does pay tribute to his own heritage by mixing in more atmospheric moments than most giallo of the time.

Unlike most of the genre, A Blade in the Dark takes place mostly in broad daylight, in spite of the title, which clearly sets it apart from other giallo films. This allows the film and filmmaker to explore his surroundings and juxtapose their austere cleanliness with the brutal violence of the murders. The villa in which Bruno is working is filled with white walls and white tiles, so when a vicious attack occurs, the red of the blood is in greater contrast to its surroundings. I found myself reminded of a classic death in Argento's Tenebre (1982), in which a similar tactic is used to make the violence appear more brutal. When Blade does plunge us into darkness, it's typically as a result of the film-within-a-film that Bruno is working on as a way of exploring what Lamberto's film is not, as opposed to aping previous work.

Another key element that makes A Blade in the Dark work on more than just a surface level is the blurring of the lines between the film's score, and the work of Bruno on the film within. The use of metacommentary has become commonplace in horror films today, and this was certainly not the first use of a horror film mixing its reality with the viewers, but it is an early example of this effective tool to keep the viewer off balance. This off kilter approach to scoring the film is one of the key elements that distinguishes A Blade in the Dark from its contemporaries.

While A Blade in the Dark isn't a classic by any means, it's certainly a film worth watching. Lamberto Bava is a director with a wildly uneven CV, and this early work of his is by no stretch his best. The 1985 heavy metal horror classic Demons takes that crown, hands down. However, in comparison to his other films, A Blade in the Dark stands out as one of which his father would have been proud.

88 Films is a new label for ScreenAnarchy; this is our first review and I must say I'm pretty impressed. A Blade in the Dark is a part of their fascinating Italian Collection, which is packed with giallo, action, eurocrime, and horror films. The line ranges from cult classics like Anthropophagus, Zombi Holocaust, and Night Train Murders, to more obscure films like Blastfighter, SS Experiment Camp, and Hitch-Hike.
A Blade in the Dark fits somewhere between those two categories, but I'm certainly happy to have gotten the opportunity to see it. The disc looks quite good, though the image isn't exactly a stunner, it's a solid HD transfer with no significant print damage, a good color balance, and decent fine detail. This is definitely an upgrade from the previous DVD. For a film shot on 16mm film, you can't ask for much more. The disc provides both an Italian and English DTS-HD MA Mono track, though both must be accessed through the main menu and cannot be switched while watching the movie, which is a bit disappointing.

The extras on the disc sound minimal, but actually provide over an hour of further context that is very informative. First up is a 20 minute interview with cinematographer Gianlorenzo Battaglia in which he describes working with Lamberto Bava both as an apprentice and on his own. His fond memories make for interesting viewing.
The second extra, and easily the longest, is a Q&A with Lamberto Bava, moderated by High Rising Production's Calum Waddell. This feature is 50 minutes long and while it is very informative, I really wish they'd included subtitles for Bava. Even though he is speaking English, it's quite obvious that he's not entirely comfortable with the language. I can understand the vast majority, but a little clarity never hurts. These extras definitely help add context to this underseen film and enhanced my appreciation for both A Blade in the Dark and its director.

88 Films' Blu-ray of A Blade in the Dark is a UK product and locked to Region B, so North American and Asian fans will need special hardware to view the disc.

A Blade in the Dark