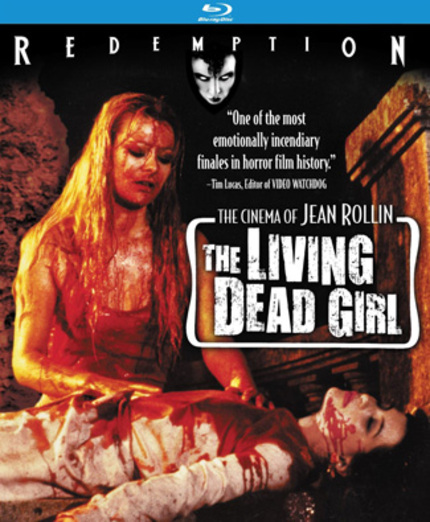 Jean Rollin's most commercially successful films is also one from which he took little joy. The Living Dead Girl is a film about a zombie, sort of, which was made in 1982 in the wake of international zombie mania following the Italian boom that was sparked by the worldwide success of George A Romero's Dawn of the Dead. After having spent a decade more or less entrenched in vampire lore, Rollin was forced to step outside of his comfort zone in order to secure funding to get any kind of film made at all. Make no mistake, though, The Living Dead Girl is all Rollin, and the formidable team of Redemption Films and Kino Lorber have done a spectacular job with this, the most infamous of Rollin's work.

The set up is silly and brief. Workmen, looking for a shortcut, hatch a plan to dispose of some toxic waste in the neglected catacombs beneath a French country estate. When the hazardous materials spill, the resulting mess reanimates the corpse of a recently dead young girl who returns with an insatiable and undeniable thirst for blood. The girl, Catherine, is not your average zombie. She begins to remember things about her life as she wanders through her home after dispatching the unfortunate contractors. Eventually she stumbles upon a photo of a dear childhood friend with whom she has a blood pact. Catherine lures her old friend, Helene, back to her chateau for comfort, but soon they both realize that the only comfort for Catherine comes from bloodletting.

This, as I mentioned before, is not a typical zombie film in any way. It is more of a relationship drama than anything else. Catherine is not a mindless beast, she can control her urges enough to spare Helene and focus on others. However, when Helene sees her friend suffering, she takes it upon herself to procure victims for Catherine, even when Catherine doesn't want to kill anymore. As the film wears on, the two women slide slowly to opposite ends of the sanity spectrum, with Helene devolving into the bloodthirsty one and Catherine simply wishing to end the pain. Part of their childhood blood pact was that if one died, the other promised to follow quickly, and Helene intends to keep her promise. This pact between girls of no more than eleven leads to one of the most intense endings of any of Rollin's films.

Part of the reason that The Living Dead Girl has lived so long in the memories of horror fans is that it was a part of the gore wave of the early eighties. Rollin detested gore films, and was all but embarrassed to be making them, however, such was life. No gore, no funding, so he did it, and even though the gore is not often convincing, it is, nonetheless, pretty gruesome. The Living Dead Girl was the very first professional job of Benoit Lestang, who would go on to be one of the most well-regarded FX artists in horror film history, working on films like Martyrs, The Brotherhood of the Wolf, Sheitan, The City of Lost Children, and many more before taking his own life back in 2008. The effects in The Living Dead Girl are crude, but inventive, and it is probably to Jean Rollin that Lestang owed his career.

The Living Dead Girl is something that I didn't expect. I knew that it was one of Rollin's bloodier films, and I knew that it was technically a zombie film, but I didn't expect it to be so touching. The slow pacing of the film, and taking the time to build Catherine into a sympathetic character, even if she is constantly disemboweling people, turns the film into something more emotionally resonant than most zombie films. There are some execrable moments in the film involving a pair of American house hunters looking to purchase the chateau, but thankfully they are taken out of the picture in a most appropriate manner. Those sequences were shot in English to please producers and distributors, and Rollin let the American director on set handle all of the inserts. Apart from those minor disruptions, The Living Dead Girl is a great film more spite of its gore than because of it. Definitely worth checking out.

True to their promise, Kino Lorber have presented The Living Dead Girl in a wonderful remastered Blu-ray edition that maintains the integrity of the film's image without going overboard on the restoration. As such, the film does ahve some minor print damage, but nothign that is too distracting. The colors and detail both fare very well, and while this isn't a million dollar reconstruction, it's pretty damned impressive for a little film like this. There is only a French language track included and it is perfectly serviceable, I noticed no problems, which is probably about as good of a recommendation as I can give for a film like this.

While the film itself is obviously the most important part of any home video presentation, I would be lying if I said I wasn't blown away by the attention paid to the bonus material on this disc. The Living Dead Girl is, without a doubt, the most feature-laden of Redemption's Rollin discs to date. There are interviews galore about every aspect of the production as well as a tribute to the late Lestang from Rollin confidant Daniel Gouyette, but the most intriguing of all of the extras is teh footage from Fantasia 2007. That year the Fantasia film festival showed both Rollin's classic (and my personal favorite) Shiver of the Vampires, and his most recent work, La nuit des horloges. Rollin is visibly humbled by the reaction to his films, which he repeatedly states are not for modern audiences. The disc features not only a couple of brief interviews around the screenings, but also footage of a lengthy Q & A session following the screening of Shiver, which is fascinating as we get a view of just how sophisticated this man really was. Fantastic work.

If you're interested in the work of Jean Rollin, this is a bit of an awkward starting point. The film may be thematically similar to his other films, but the subject matter and gore are really unusual. However, if you already know the film and just want a quality presentation, look no further. The Living Dead Girl is probably Kino/Redemption's best work yet.
Tweet Post Submit

Order The Living Dead Girl on Blu-ray at Amazon