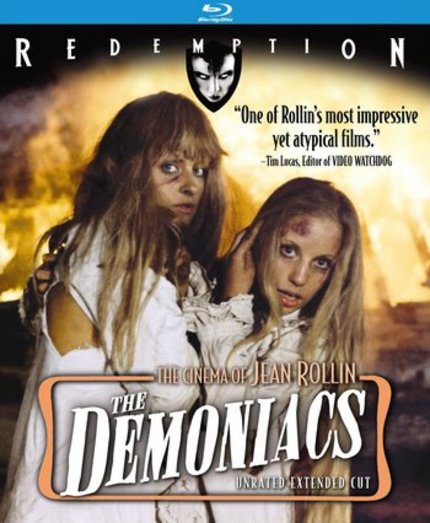 The Demoniacs is an unusual film in Rollin's catalog for a number of reasons. The most obvious difference is the lack of vampires, though that is not without precedent. Hell, The Iron Rose didn't have any vampires and I loved that movie. I think what lost me here was the lack of immediacy. Rollin's films are never very long, they generally top out around ninety minutes, but they are usually fairly judicious with their content, and even the less action packed segments are often used as a way of building tension. I get the feeling that Rollin went a little crazy with the self-indulgence and the film suffers for it.

When a pair of sisters wash up on a rocky coast after their ship has crashed, they are set upon, raped, and killed by a crew of wreckers, scavengers who cause shipwrecks and pocket the spoils. This motley crew of hooligans, made up of a set of exploitation archetypes (the heavy, the nympho, etc...), take their winnings and go off to spend them at the local pub, however, when one starts seeing the dead girls haunting him, things get really shaky really quickly. The girls' souls make their way to a local cursed cemetery that also happens to be the home of the Devil himself, and make a deal to get their revenge. They terrorize the wreckers and ultimately win their vengeance, but at what price?

The film sounds perfectly acceptable, and when you add in some of the details, it even sounds appealing. When I read the description of The Demoniacs in Tim Lucas' liner notes, I was psyched to check it out. However, the film is so slow and unengaging, that I just couldn't wait for it to be over. Everything in the film should work, the voluptuous nymphomaniac (Joelle Coeur) is drop dead gorgeous and frequently nude and unashamed, and her wrecker partners are also cut form pretty evil cloth, but everything just moves too slowly, and ends up being really boring.

I never thought I'd say this, but Rollin's sex scenes in this film, while about as graphic as softcore films could be, are mind-numbing and truly unsexy. He shoots both non-consensual and consensual encounters with the same leering eye, which is both creepy and incredibly boring. One can only watching nude women writhe in complete silence for so long before checking one's watch. You may be thinking, "Charlie, you're nuts! That chick is hot!" You'd be right, but you'd also be missing what it is actually like to watch this all go down.

In spite of the film's departure from Rollin's regular subjects, there is no doubt that this film is a Jean Rollin film, which only serves to make it that much more disappointing. The film's ninety five minute runtime feels like an eternity and I was clawing my couch to pieces waiting for it to end. Unfortunately, the collector in me will force me to keep this Blu-ray just to keep the spine numbers complete, but I can think of about a thousand things I'll pick up before I ever watch this again.

This was so unappealing that I may have trouble being reasonable with the disc section. It looked fine, I guess. No major image flaws, and the colors looked about right. It didn't take very long for me to stop caring though, so something may have slipped through. The audio, while quite decent in its original French, may have provided respite from the boredom had their been an English dub to entertain me, alas, it wasn't to be.

The Demoniacs gets similar treatment to the other Rollin releases this week in the extras department, which is good for fans. We get the Rollin intro, a Natalie Perrey interview, an interview with Jean Bouyxo, and a few minutes of deleted footage along with ten minutes of additional sex scenes (normally something I'd be okay with, but in this case, it almost makes me want to never have sex again).

Didn't like the film. Rollin fans should check it out, but not essential.