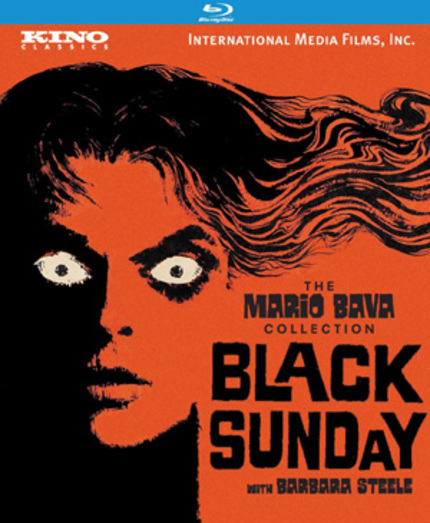 These are the salad days, my friends.

On my shelf of Blu-rays to review I have a pair of Mario Bava Blu-rays, a pair of Jess Franco Blu-rays, and a mess of other films that I would never have guessed would ever appear in any kind of up to date format. It seems like only yesterday that Anchor Bay's Mario Bava DVD collections were such big news, and now those films are appearing little by little on Blu-ray, thanks to Alberto Leone and his deal with Kino Lorber. It seems like there's never a week that passes where I'm not blown away by the announcement of some retro-gem or other making its way to the most advanced format on the market. At this point the real question is, who will take full advantage of the format most effectively? I may just be whistling Dixie, but Kino certainly have a keen advantage in the battle for the hearts, minds, and wallets of the horror geek world.

Italy has a rich cinematic culture and history, filled with colorful and immediately identifiable auteurs. While he wouldn't have made your average movie geek's faves list fifteen years ago, Mario Bava has been slowly creeping up the ranks since then, largely thanks to a new appreciation for Italian genre films and high profile fans like Martin Scorsese. The fact that Bava has either created or pioneered (depending on who you believe) the giallo genre certainly doesn't hurt. Kino's new release of Bava's first true classic film, Black Sunday (Mask of the Demon), is a wonderful reminder of days long gone when atmosphere trumped angst in horror films.

Black Sunday, seen here in its uncut European form for the first time on US home video, lingers in the hazy mists between the classic era of film horror in the '30s-'40s and the rebellious age of '70s gorefests. In essence, Bava was sailing the same seas as the good ship Hammer at a time when horror was still something of a dirty word. What Hammer accomplished with sex appeal, Bava did with immaculate pacing, art direction, atmosphere, and, well, sex appeal. The film's star, Barbara Steele (or Steel, as she's credited in the English language credits of the film), was something of a cottage industry unto herself at the time, and her piercing eyes, even in black and white, are nothing short of mesmerizing.

Black Sunday is the quintessential Italian witchcraft film, even fifty years later, it hasn't been matched. In fact, I get the feeling that most filmmakers are hesitant to try. The closest we've seen to an attempt to usurp this throne is probably the three mothers trilogy of Dario Argento, but I think that even he'd bow to Bava if given the opportunity. Where Argento goes for the jugular, Bava prefers to slowly strip away the viewer's sanity, making him question things he thinks he already knows and making every new revelation a shock to the system.

I'm not going to pretend that I have anything new to say about Black Sunday, it is certainly one of the most discussed and written about Italian horror film in existence. I will, however, throw in my two cents to say that the film remains a brilliant example of what gothic horror can be, but may never be again. This is a film worth remastering, saving, contemplating, arguing and coming together over, and cherishing. Black Sunday is superb.

When I first popped in this Blu-ray I wasn't terribly impressed with the transfer, it wasn't until I compared it with my old DVD that I realized just how much of an improvement the new transfer really is. The contrast is markedly improved, the black levels are much better, and detail, while not revelatory, is also quite impressive. This is a 52 year-old film without a major studio behind its preservation, so I think that all things considered, this is a gorgeous transfer. The English language audio is very good also, no major hiccups, though it would've been nice to have the Italian dub, I imagine there must've been licensing issues preventing that from happening.

The only major extra is an old audio commentary from Tim Lucas. Normally I'd call this lazy, but in this case, Lucas is the expert, and his extremely academic reading of the film is very interesting as always. The downside of being so well-prepared for an audio commentary is that the commentator can come across as a tad dry at times, but I'll trade dryness for quality any day of the week. I am, again, saddened that there is no booklet, but I suppose that someday I'll cough up the $300 or so for Lucas' book. Sadly today is not that day. $18 for the Blu-ray is doable though, and I suggest you do it!