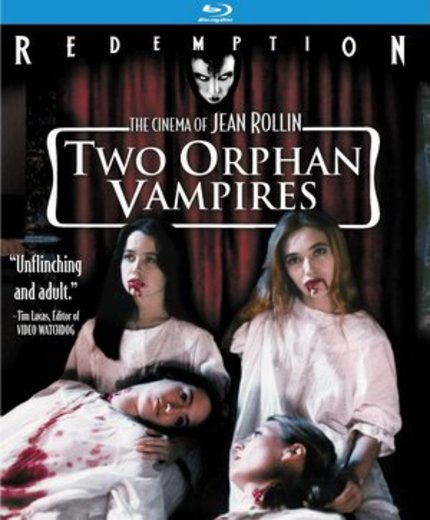 Up to this point, Redemption's Blu-ray releases of the work of Jean Rollin has focused on his classical period, that is, the films from his debut in 1968 with The Rape of the Vampire through the early '80s with films like The Living Dead Girl. The latter film pretty much serves as the line of demarcation between those films made from passion in his hungry years and the films he made in the '80s to pay the bills. Between 1983's Sadomania and 1994's Le parfum de Mathilde, Rollin mostly served as a hired gun making sex films; some classy and some not so classy. It wasn't until 1997 that he was able to make something that resembled the films for which he's known best;  that breakthrough was Two Orphan Vampires, based upon a series of novels he'd written to keep the cash flowing.

Two Orphan Vampires is both very much a part of Rollin's classical oeuvre and a film apart from his style. The most obvious similarity is that the film features a pair of vampires; in this case the titular orphans are afflicted with a strange kind of daytime blindness, which allows them to pass as ordinary girls at the orphanage where they live. However, unbeknownst to the nuns at the home, the girls regain their sight in the blackness of night and use their nocturnal advantage to prey on unlucky victims. When they are adopted, as a pair, by a middle-aged bachelor, Dr.  Dennary, they use their new found freedom to explore the world as only they can see it, all while the good doctor sleeps. As the girls mature and their animal urges take over, their challenge becomes controlling themselves against running amok, but will they be successful?

As much as I've grown to love and appreciate Jean Rollin, watching the first 40 minutes of this film is a chore. Rollin loves to hear his characters talk, which is quite different from most of his early films, many of which tell large swathes of their stories through silent imagery. The inane dialogue about the past lives of the orphan twins goes on for ages and really separated me from the on-screen action, when there even was any. It was at this point, around halfway into the movie, that I began to long for the 87-minute Jean Rollin films of the '70s. The idea that I'd have to suffer through another full hour of philosophical ramblings from a pair of adolescent girls was mind-numbing. Luckily, Rollin manages to get the picture rolling again right around the hour mark and the pacing carried me through to the ending without too much damage.

In all of the interviews I've seen with Rollin, he mentions what a different filmmaker he was in the early part of his career. He seemed to feel that the final quartet of films he made, including this, Le nuit des les horloges, Le fiancee de Dracula, and Le masque de la Meduse, more represent the filmmaker he was than his early work, which he characterized as almost amateurish. However, I think it is that young man's ego that made the '70s films so engaging. Two Orphan Vampires, on the other hand, seems far too restrained and conventional, even though there isn't a single scene in the film that lets you forget that this was created by Jean Rollin.


The two actresses who performed in the roles of the orphans are adequate, but not much beyond that. In fact, none of the performances really stand out. Two Orphan Vampires is such a low key affair, even during the bloodletting scenes, that it is hard to single out any performances, as they all seem to exist separate from any central structure or idea. It is almost as if all of the actors are performing at one another, rather than interacting with one another. This could be due to the fact that Rollin wasn't on set for the entire shoot; he had to take a couple of days off per week to undergo kidney dialysis treatments, and the direction on those days was handled by his DP, but I think the more likely culprit is that Rollin simply wasn't the same director in his later years as he was as a young man. While the spirit is obviously still there, the fire seemed to have died down a bit. Not necessarily a bad thing, but it certainly has an effect on the finished product.

Two Orphan Vampires is by no means the worst of the Rollin features in the Redemption Films lineup. I prefer this easily over something like Demoniacs, however, it doesn't hold a candle to the tour de force films like The Shiver of the Vampire, or the audacity of The Iron Rose. If you're a collector, like me, you'll no doubt need to own this, however, I would make the case that Two Orphan Vampires is an interesting study in Rollin's maturation as a filmmaker, and therefore it is worthy of acknowledgement as a long overdue return to the cinema fantastique genre that he helped define thirty years before.

As the most recent theatrical release in the Rollin collection, Two Orphan Vampires has the distinct advantage of having the newest archival materials with which to work. Redemption's Blu-ray of the film is, as such, pretty darned good. However, before you go setting your hopes too high, it is wise to remember that Two Orphan Vampires was shot on 16mm, and Redemption/Kino have a policy of avoiding excessive restoration, so the image is not perfect. That being said, I was completely satisfied with the final outcome. The disc also provides both the French and English language audio tracks, both of which are fine, but the film is generally pretty quiet, so anything flashy in the mix would be false. Thankfully, there are no such flourishes, and as such I can recommend the audio tracks as well, obviously the French track is the preferred one.

On paper Two Orphan Vampires doesn't look like much in the extras department. There is only an interview with Rollin and a retrospective. However, the retrospective featurette on this disc is about forty minutes long and features interviews with most of the leading cast and many of the lead crew members on the shoot, and as such it is a wonderful addition. This is among the best of the making of featurettes in the Rollin collection. The Rollin interview is also one of the best. Whereas many of the original batch of Rollin releases featured interviews of no more than a few minutes, this segment cobbles together several different interviews from Rollin's later years and turns them into about 20 minutes of solid information, which is very welcome. All in all, this latest wave of Rollins with this film and The Living Dead Girl features some of the best supplemental material of the entire collection and that alone makes these must-buys for Rollin and euro-horror fans. Highly recommended!