Mario Bava on Blu-ray: HATCHET FOR THE HONEYMOON Review 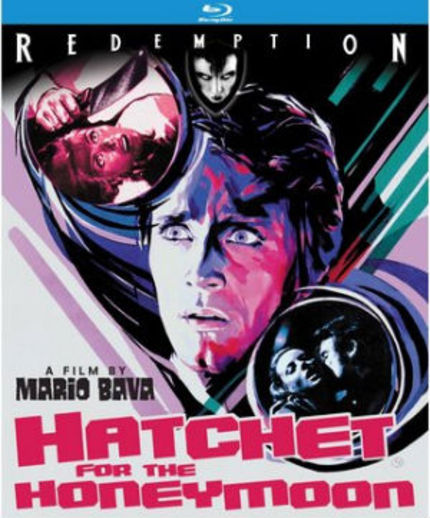 Back in 2010, we were extremely excited to review the very first Mario Bava film to hit Blu-ray with Arrow Video's release of Bay of Blood. At the time cult video geeks were hoping that this release would open the flood gates for Bava in HD, if ever there was a filmmaker whose work was made for Blu-ray it is this one. However months passed and there were no more releases in sight until Eurohorror collection Redemption Films teamed up with Arthouse champions Kino Lorber, and those floodgates began to leak like a sieve.

Redemption introduced themselves to the world of high definition with a massive pile of Jean Rollin Blu-rays, an impressively curated collection which has still not exhausted itself. Then they released the odd British horror cult film, all of which were amusing, but nothing mind-blowing. However, earlier this year word began to get out that Redemption had acquired the Alberto Leone collection of Mario Bava films for release on Blu-ray and DVD. Film fans will recognize that these are the same Bava films from which the very impressive Anchor Bay bava box sets were created, and now they're starting to make their way to Blu-ray, starting with the impressive trio of Black Sunday starring the stunning starlet of Italian genre cinema, Barbara Steele, Lisa & the Devil/House of Exorcism with a pre-Kojak Telly Savalas, and this film, the super-groovy psychedelic giallo Hatchet for the Honeymoon.

Rather than provide a synopsis the film, I think it will suffice to give a basic outline of the premise. A wealthy fashion designer, played by Stephen Forsyth in a series of fantastic coveralls and pantsuits, is knocking off newlywed women still in their dresses. This isn't a spoiler, the film pretty much starts this way and his identity is unveiled before the end of the first reel. What is more exciting is the growing madness within Forsyth's John Harrington, as he attempts to uncover the genesis of his drive to kill, and, well, if you've seen any other super famous horror films, this one may not be such a big surprise.

Hatchet for the Honeymoon's big twist is more or less stolen from another, much better, film about from about ten years before. However, the film's visual style and Bava's panache and way with camera makes it unique and well worth viewing on its own. Stephen Forsyth chews scenery like nobody's business, and delivers some of the most fantastic dialogue you'll ever hear. When he declares, within the first ten minutes, "I'm a madman", you know this is gonna be good. When he later explains his obsession for murdering women while still in their bridal veils, we're told that, "A woman should live only until her wedding night, love once, and then die". Of course, this is all said in voiceover, but it's delightfully daft, nonetheless.

Forsyth's over the top performance, Bava's impeccable direction, and the fantastic art design of the film combine to create a fun giallo to rival the best of the genre. While this film may not be the most original of his works, Hatchet for the Honeymoon certainly is one to check out. The pacing is very sprightly, and this makes for a great night's viewing. There's not too much gore, most of the violence is implied rather than splattered across the screen, but there's enough to keep horror fans happy and placate the thriller fans who dig the occasional gruesome tableau.  Definitely worth checking out.

It does kind of get repetitive, but Redemption/Kino's treatment of Hatchet for the Honeymoon is a very competent one. The video looks very good, with a high definition sheen that allows for greater fine detail and improved color range. Kino doesn't typically do a whole lot of clean up on their releases of classic films on Blu and this is no exception. The film is riddled with tiny specks that gave me the feeling of a very organic 35mm screening, but may rub some videophiles the wrong way. As far as I'm concerned, I'd rather have the image unretouched than over digitized, and for that reason I'll recommend this transfer. For the vast majority of the film, the audio is also very good with no pops or hisses in the English language soundtrack, however, right at the 1h20m mark, only a few minutes before the end of the film, the soundtrack gets very rough and noticeably damaged. It's a minor issue for me, but worth being aware of.

As far as the extras for the disc go, Hatchet for the Honeymoon isn't exactly loaded, but what is there definitely satisfies. The only feature specific extra is an audio commentary by Tim Lucas, who, quite literally, wrote the book on Bava (All the Colors of the Dark). Lucas is perhaps the finest scholar on Mario Bava writing in any language, and his touch is very appreciated. I wish Redemption had included some excerpts from his book as a booklet in the disc, but no such luck. In addition to this Redemption includes trailers for this and other Bava films on their way soon. Each is okay on its own, but comparing the Italian and American trailers of Lisa & the Devil/House of Exorcism is a very interesting exercise, as the former is sold more as a mystery, while the latter looks like a straight up slasher. I can't wait to revisit the lot of them on Blu-ray soon.

Mario Bava geeks knew they wanted this no matter what I write, but trust me when I say that it is worth every penny, highly recommended!