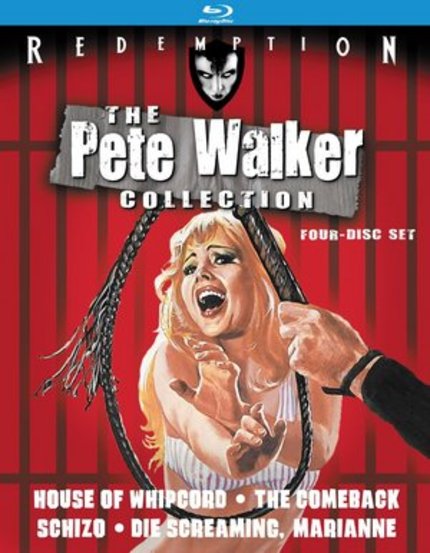 It's been a little over a year since Kino Lorber's partnership with Redemption Films bore fruit to the home video consumer with their releases of five classic Jean Rollin features. The last year has been an amazing ride packed with some incredible titles and neat little discoveries for the discerning Eurosleaze film fan.
The latest batch of titles from Redemption prove nothing if not their dedication to preservation of these sometimes awful films, but their treatment of even the most boring of garbage is to be commended, and lord knows there's someone out there chomping at the bit to complete their collection. That someone is me.

One of the fantastic things about Redemption Films vast catalog is that they, very much like the BFI's Flipside collection, have a wonderful treasure of underseen British genre films. Among these are the decidedly nasty and often unpleasant films of Pete Walker. Here is what Redemption has to say about these four films:

In HOUSE OF WHIPCORD, a fashion model (Penny Irving) is lured into a private reform school where she is punished for her sexually liberated behaviour by a zealous warden (Barbara Markham). Walker's spin on Hitchcock's Psycho, SCHIZO involves a beautiful figure skater (Lynne Frederick) who must protect herself against a homicidal stalker. DIE SCREAMING, MARIANNE stars Susan George (Straw Dogs) as a woman caught in a nightmarish plot to rob her of an inheritance. Pop singer Jack Jones (best remembered for the Love Boat theme) plays a singer who is haunted by the death of his wife, and led into a confrontation with the killer, THE COMEBACK.

If I had to pick a favorite, it would definitely be Walker's nasty take-off on the women in prison subgenre, House of Whipcord. This film is as dark and violent as one might expect from a film about a kangaroo court and prison established in the woods for women of questionable morals. We've got sadistic female guards, an ancient male warden bent on correcting the ills of modern morality via incarceration, and a fashion model whose only crime is being a pretty girl. The rest of the films flirt with the line between tension and tedium, but House of Whipcord is a real zinger!

These four discs look and sound okay, but are far from pristine. The bonus material, however, is very interesting with a series of conversations with Walker and some very engaging commentary tracks. Definitely worth picking up, though if don't need all of the spine numbers, House of Whipcord is now available as a separate disc, and that's the one I'd go for. 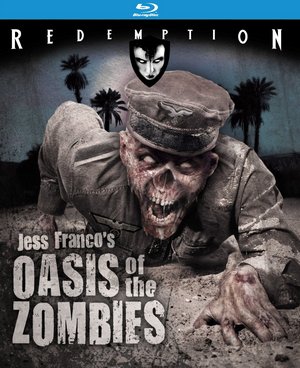 Oasis of the Zombies
Jess Franco is among the most prolific directors of the Eurosleaze craze in the '70s and '80s, and as such, he has probably directed more shit than anyone else in the movement. Don't get me wrong, Franco has his fair share of gems, but I'd say that from what I've seen, his later output leans more toward the trash than the treasure. Among the trash is this interminably boring cash grab, Oasis of the Zombies.

Once established as a master of the Euro-erotic horror film, Jess Franco continued to explore more traditional modes of filmmaking, setting familiar genres on their ears with his singular brand of reckless creativity. Made during the living dead craze of the early 1980s, OASIS OF THE ZOMBIES is one of only a handful of motion pictures to explore a most peculiar subgenre of the movement: the Nazi zombie film.

In telling the story of a cache of German gold - lost in the desert, sought by a group of teenagers, protected by the walking dead- Franco demonstrated his characteristic lack of restraint, shamelessly inserting stock footage from a bigger-budget war picture, allowing his camera to dwell on the worm-eaten orifices of the shrivelled undead and, of course, lacing the action with his trademark style of lyrical eroticism. The resulting film is a decadent exercise in grindhouse filmmaking that is more audacious than frightening, illuminating one of the more peculiar facets of Jess Franco's uniquely warped cinema.

In spite of being a pioneer of the early wave of European horror, even Jess Franco had sunk to making rip-offs by the early '80s. Somewhere in the massive flood of zombie films that followed Lucio Fulci's Zombi 2 this dry little fart of a movie escaped. The film opens encouragingly enough with a pair of lesbian lovers taking a drive through the desert, but it never picks up any more speed and is more dead than its pathetically dead titular zombies.

I'm not going to lie, I watched this film in broad daylight and still managed to fall asleep for about 10 minutes right in the middle. I pondered whether or not I should attempt to regain my footing by rewinding the film, but the thought of adding ten minutes to its already epic 82 minute length was just too much. If you're a Franco completist, grab it, if you're a spine number junkie, DEFINITELY grab it (Redemption fills in a couple of gaps with this and the next film), otherwise, go watch Zombie Strippers or something, you'll be far more entertained. 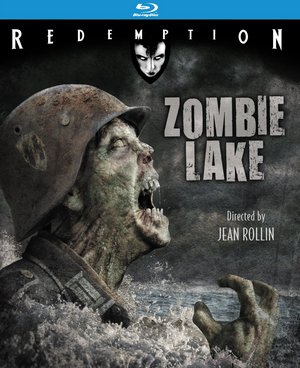 Zombie Lake
One of Jean Rollin's best known films, along with Grapes of Death, is also one of those least representative of his oeuvre. Zombie Lake is the second in this Nazi zombie double feature from Redemption, and by far the better of the two. Zombie Lake is also the result of the zombie craze of the early '80s, and even though Rollin does have several zombies on display, this film is quite a bit wackier than just that.

One of the most bizarre films in the living dead craze of the early 1980s, ZOMBIE LAKE feasts without restraint upon the carcasses of a variety of  cinematic genres: the WWII picture, the sexploitation film, gore horror, and even the romantic melodrama.
Conceived by one master of erotic horror (Jess Franco) and pseudonymously directed by another (Jean Rollin), ZOMBIE LAKE weaves the tale of a contemporary French village haunted by water-logged Nazis slain by the resistance. With little regard for narrative subtlety, the film veers from the shamelessly exploitive (as when a women's volleyball team skinny-dips in zombie-infested waters) to the tearfully sentimental (depicting a young orphan girl's psychic connection to one of the walking dead).

Reading that synopsis should be enough to give you an idea of why, in spite of its shoddy execution, Zombie Lake is worth your time. The film opens with an extended skinny dipping sequence, largely shot from below in the water, before the lovely lady is attacked by an undead solider from the depths of the Lake of the Damned. Later on, a giggly girls volleyball team stops for a skinny dipping break in the same lake and, surprise, surprise, they are felled by Nazi zombies while quite nude. You've gotta love Rollin's dedication to his craft. In spite of the shoddy nature of the film, he still manages to squeeze in some buoyant girls and injects some fun into the largely flaccid plot. My favorite side plot of Zombie Lake has to do with the psychic bond between a Nazi zombie and his illegitimate daughter.
In the end, Zombie Lake is a largely engaging as a surreal piece of populist entertainment. That is, of course, if the population is full of rabid zombie movie fans with low expectations. However, the film manages to throw enough curveballs to keep fans guessing, laughing, and aroused. Look past the unbelievably shitty zombie make up and effects, and there's a lot of heart in this film. Who knew?

Both Oasis of the Zombies and Zombie Lake come to us in pristine new HD editions that really blew me away. I never thought I'd see these films looking this good. There are time where the audio is a little bit jumpy, but the image (save for a few specks) is beyond satisfying. There are no significant extras on these discs, just trailers and English dub tracks, but I think they are good buys at the right price. If you must choose one, Zombie Lake all the way.
Tweet Post Submit