Things have slowed down relatively speaking on the Star Wars front, with most of J.J.'s time spent prepping his second (and presumably final?) foray into the word of Star Trek.

Still, there was some solid news confirmed today. At Cinemacon this afternoon, Chairman of the Disney Corporation Alan Horn officially confirmed plans for a film a year starting in 2015 with the release of Episode VII. Unlike the three year gap that separated the other films in the series, it was confirmed that Episode VIII would be screening in the summer of 2017, and Episode IX in 2019. 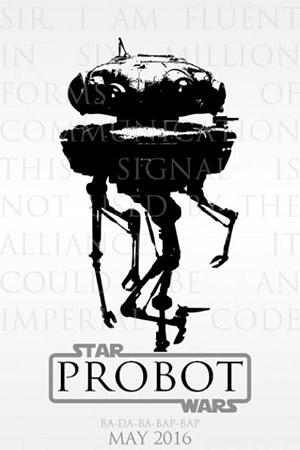 In the even years between, we're to expect those standalone films that have been discussed, with still no official confirmation on what to expect. From what the announcement sounded like, there are no plans to stop after the final "official" episode, meaning we've got loads of space to explore many storylines.

You should all know, my vote's still for the Probot film.

Meanwhile, there's a video shot on the set of Parks and Recreation showing Patton Oswalt engaged in a "citizen's filibuster." With the cameras running, he proceeds to give his version of what he'd like to see in the upcoming postquel, including the "gauntlet of Boba Fett" crawling from the filthy maw of the Sarlacc pit. He starts going on about comic book culture, something much more outside by bailiwick, finding the ultimate in any insane crossover of multiple geek universes.

Watch the video below with appropriate wonder and admiration, and try not to think of a Rat chef spewing forth such delicious gems of hardcore nerdiness.

Do you feel this content is inappropriate or infringes upon your rights? Click here to report it, or see our DMCA policy.
AvengersCineruminationsDisneyEpisode 7Pattton OswaltProbotStar WarsThanatos