Destroy All Monsters: Is THE FORCE AWAKENS The End Of The STAR WARS Action Figures? 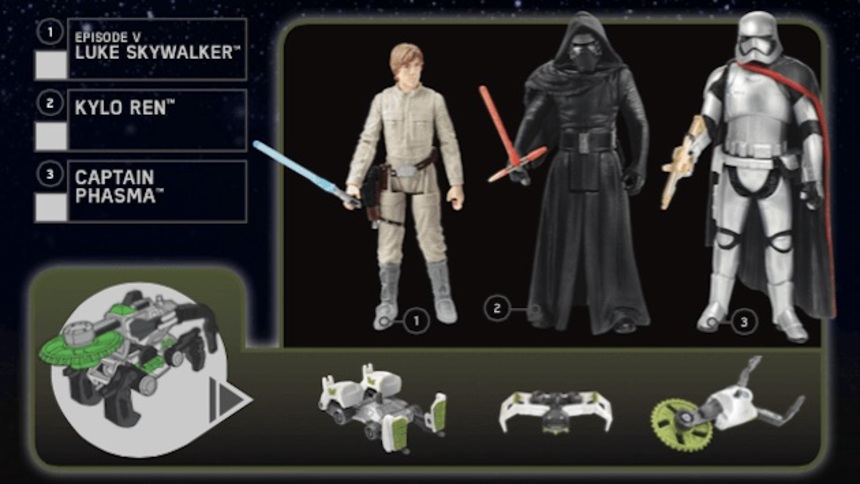 With nothing going on at the movies or on TV over the weekend, I ticked another item off my to-do list and rewatched Indiana Jones and the Kingdom of the Crystal Skull.

I did this as a protective measure against my own white-hot enthusiasm for Star Wars: The Force Awakens, which has achieved pre-Phantom Menace proportions in the last couple of weeks, thanks to that wonderful final trailer, and the night we cracked the internet buying our tickets.

Crystal Skull is, of course, just as terrible as you remember. Worse, it plants roots in the other films, particularly Raiders, whether you like it or not. There's more story, now, after that ride into the sunset at the end of The Last Crusade; Dad and Marcus are dead, and the spit-fueled romance between Indy and Marion in Raiders will end in that overlit church at the end of Skull, with the couple grinning gormlessly at each other like a pair of 70-year-old virgins who are about to "make whoopee."

This is the fate that awaits us with The Force Awakens, whether it lives up to our expectations or not. Just as Obi-Wan's passing reference to "the clone wars" in Star Wars now conjures up full-colour memories of two movies (and a TV show!), the events and characters of the Original Trilogy are about to be retrofitted with a tail end they were never designed to have. Fingers crossed.

While watching Indy IV, I was thinking about the Indiana Jones action figures. Having never really done much with the Indiana Jones action figure license back in the '80s (a short brace of Raiders figures that never really caught on) Kenner/Hasbro rose to the Crystal Skull occasion and launched a new 3 ¾" line whose detail, articulation, production, and packaging matched the extremely high standards they had achieved in their re-launched Star Wars action figure line in the same scale.

Star Wars, if you remember, was brought back to life as an action figure line in the mid-90s. This leads to the rather terrifying calculation on my end that while the original, cherished Star Wars figure run lasted from approximately 1978-1985, i.e. 7 years, the re-launched run has now been going for two decades. I'm old. And here I am, still writing about toys.

Kenner, later bought by Hasbro, wrote the book on toymaking with their original Star Wars line and its latter-day antecedent. I don't know if anyone at Hasbro thought that a classy run of Indiana Jones toys to coincide with the fourth Indy movie would set the cash registers aflame at Toys R' Us, but they gave it their best shot. The Indy line of toys - all five waves of them, including the final cancelled wave which finally emerged at Comic Con a couple of years later - were state of the art for their scale. In many ways, they still are.

Which brings me to Star Wars: The Force Awakens.

Still owned by Hasbro, and still coasting on the success of the main Star Wars line which has been, I say again, running uninterrupted for twenty years (just try being a completist on that), September saw the launch of the new series of toys for The Force Awakens. I was the guy who was first in line at the toy store at midnight back in '99 for the Phantom Menace action figures, so naturally I partook (a little) in the Force Awakens toys. I somehow ended up with three versions of Rey, one Finn, no Kylo Rens, and an astonishing lack of Captain Phasma, which I continue to find dispiriting to this day.

And here's the thing: The Force Awakens action figures suck.

I mean, they really suck. They're cheap, light, unarticulated little blobs of cut-rate plastic. They return the line to 5-point articulation (legs, arms, and head) for the first time in decades, which would be a touching throwback to the vintage Star Wars line, if the toys weren't also slackly designed and produced in a brittle plastic that feels like it belongs in a bin of "Star Fights!" knockoff toys in someone's basement in Chinatown.

That Phantom Menace toy line I mentioned, the one from 1999? It's at least a couple of years' more advanced from a design perspective than The Force Awakens, right here in 2015.

I have to assume this is on purpose.

Here's something else I noticed: At some point in the last few years, Hasbro wandered away from the 3 ¾" scale that they originally turned into the standard for childrens' action figures. They still make toys in the 3 ¾" line - those are the ones I was mentioning that suck - but they've also introduced a 6" series, the "Black Series," which are slightly more luxurious (read: expensive) takes on the principal cast with more articulation and a higher attention to detail.

I'm not up to date on the latest financial metrics on the action figure industry, but here's what I surmise is going on:

1. The Indiana Jones and the Kingdom of the Crystal Skull line cratered. The bottom has/had been falling out of the action figure line for years at that point; kids these days are more likely to divide their parents' money between LEGO and video games.

2. The toys, then, really are for people my age. Or at least, adult collectors, who grew up with the Kenner/Hasbro action figures of the 1980s, are a substantial enough portion of the overall market share that the manufacturers are now caught between entirely antithetical needs to create childrens' toys that are cheap, rugged, and under no threat of scrutiny; and adult collectors' items that are, well, awesome.

3. Having basically invented (or reinvented) the format with Star Wars, Hasbro couldn't very well leave The Force Awakens on the table in terms of their waning 3 ¾" line, so they divided and conquered: bargain basement action figures in the original format (which suck), and "collectors items" in the Black Series. Which also, in my humble opinion, suck: because who wants a 6" Rey looming over his cherished vinyl-caped Darth Vader from 1978?

It will be a point of particular irony if the re-launch of the Star Wars film franchise is the final gasp of the world of action figures for children, given that the original film gave us the format in the first place. I suspect weirdos like myself will have collector-marketed "toys" to contend with for a long time, but the days of peg-warming Greedos collecting dust at Wal-Mart might be behind us.

Again, I'm no expert on the business decisions behind these toy lines, just a sometime fan. Any insights in the comments are always appreciated.

And in the meantime, a bit of math: a dozen The Force Awakens 3 ¾" action figures are roughly equal to the cost of one Sphero iPhone-controlled BB-8. Which, I assure you, does not suck.

Destroy All Monsters is a weekly column on Hollywood and pop culture. Matt Brown is playing with his toys in Toronto.

Do you feel this content is inappropriate or infringes upon your rights? Click here to report it, or see our DMCA policy.
action figuresHasbroIndiana JonesKennerStar Warstoys