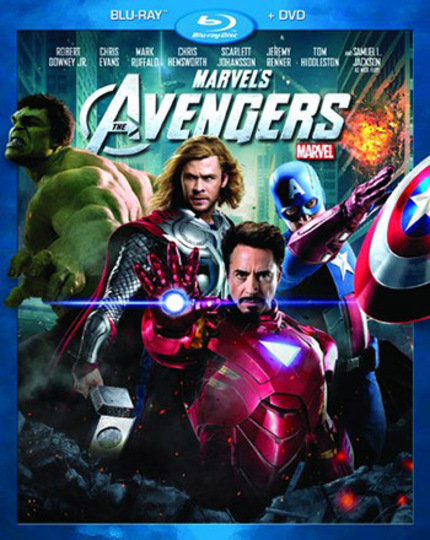 With The Avengers, Marvel succeeded in assembling top-flight talent in front of and behind the camera to give viewers one big slobberknocker of a fight involving gods (or at least advanced aliens in the cosmology that Jack Kirby created), intergalactic invaders, super-soldiers, giant green men, spies, regular soldiers, and the most restrained Sam Jackson performance we've seen in years. Everyone involved hits their marks, lands their jokes, and generally makes the whole enterprise move along at a brisk, funny clip thanks to a collection of likeable performances and a script that manages to juggle what should be an unwieldy cast.

Still, for reasons mostly owing to a longtime comic fan's sense of what "is" or "isn't" the right way to portray a group of fictional characters (always a losing prospect--avoid it if you can), The Avengers was a hard movie to fall in love with on the screen this summer. And assessing it again at home, some of the problems that cropped up then feel highlighted now without the benefit of my senses being shattered by the big screen experience. And it all comes down to a nuke.

Well, more than that, but let me just stop here and warn you that SPOILERS ARE ON THE WAY, and you can feel free to skip down to the Special Features section where I assert that Disney and Paramount have put together a respectable disc for a solid popcorn movie.

It's weird to be talking about a major summer superhero movie where one of the major plot points hinges on bureaucratic interference from a global shadow council where the grand, heroic gesture from one of its leads is tossing a nuke into space at a ship full of aliens (or robots, it's not really clear what the Chitauri's deal is). But it's that last bit, where Robert Downey Jr.s "I'm a hero but also still very selfish" Iron Man/Tony Stark had to get rid of a pesky bomb which stuck with me after I left the theater, and felt even more jarring and wrong on a second viewing.

While a large part of Marvel's connected cinematic universe was about linking everything up via S.H.I.E.L.D. (something Marvel's comics have been doing in both its main line and alternate Ultimate incarnations), the end result is that the Avengers as a team have kind of inadvertently been shifted in context from badass citizens uniting against a common threat to a quasi-military effort, and I think this is what gets at what's so hard to warm to with some modern superhero fiction (both on the page and onscreen): writers and creators want us to see so much of the behind-the-scenes wrangling, either enabling or hindering our heroes to the ultimate effect of giving their stories "plausibility" (and also ripped-from-the-real-world relevance), but with the side effect of making the heroes' true enemies the government, elected leaders, due process, and so on.

Now, you can go back years in some of the comics featuring the individual characters and see these threads pop up (i.e. Cap's brief retirement from his costumed identity because he couldn't stand to work for a corrupt government for example). And these kinds of principled stands are great, in theory, but owing to... something that I'm still trying to examine as a fan and a viewer. The big budget The Avengers, which uses the same "hero-throws-the-battle-winning-grenade" scene with a nuclear twist feels unsettling and something like creepy saber rattling. "We may not be able to save the world," Tony Stark says late in the film, "but you'll be damn sure we'll avenge it."

What I'm trying to say is, there's a nagging itch with The Avengers and how it portrays its heroes that I'm still trying to process, but one that, on the face of it, doesn't feel healthy, and it's going to take more time for me to get at why this piece of summer entertainment hit me the wrong way.

Still, Ruffalo is great in it.

Both the DVD and Blu-ray include commentary from Whedon as well as the "Assembling the Ultimate Team" featurette (8:08) with the director walking us through what makes each member of the team tick. Exclusive to the Blu-ray are the featurettes "A Visual Journey" which provides a brief overview of the sets and overall production design of the film; five thankfully deleted scenes (many of them, including the Maria Hill interrogation are quite good but would have dramatically altered the overall tone of the movie); another of the tie-in shorts, "Marvel One Shots: Item 47" (11:20) featuring a pair of crooks who get their hands on a Chitauri weapon; a gag reel (4:45) and finally, a music video for Soundgarden's "Live To Rise" (4:49).

Here's the part where I say Disney has put together a respectable (albeit likely first pass) disc for a largely enjoyable summer popcorn movie.

The Avengers is now available on DVD, Blu-ray, and 3D Blu-ray from Walt Disney Home Video.