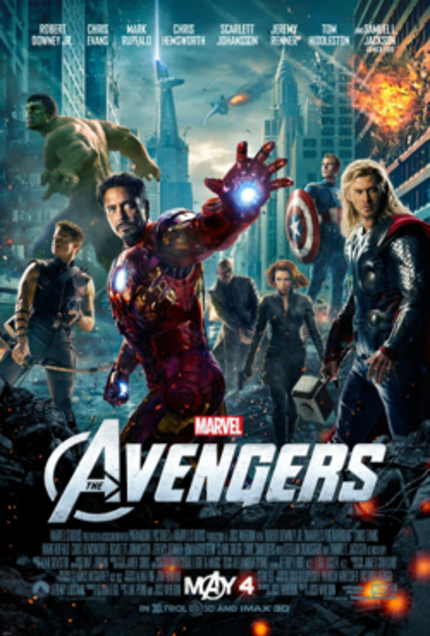 OK, fanboys, let's get a heap of things on the table, shall we? I'm the one that defends Phantom Menace, John Carter, and even War Horse, kinda, but thought Hunger Games was a disaster. I liked Cabin in the Woods a whole lot, but have never suckled at Whedon's teets. I liked Thor and Iron Man more than Iron Man 2 (duh!), I loved Lee's Hulk 'till the last 20 minutes, and thought Norton's turn in Incredible Hulk was just silly. And while I grant that 2011's Captain America was better than the 1990 version, I'm not entirely sure that should be the basis for fair comparison.

So, in broad strokes, I went into Avengers not minding spending some time with a heap of super heroes battling some mythological bad guy. I hoped to see some slinky outfits and hear some clever repartée. Instead, I got a pretty bloated film so eager to please that in the end it felt bland and lifeless. It's a Michael Bay monster with slightly more restrained editing, but just as many forced one-liners and empty plot detours.

Now, I'm going to get all spoiler-y, but, really, you're likely to be seeing this film in the next couple days, so why not wait to see it before you decide I'm an idiot and unleash outrage in the comments below.

Avengers does a few things I hate. First, it has scenes that explicitly exist only to inject a bit of delay so that the film feels more epic in scope. I have no real problem a film taking time for pixels to fight other pixels, but when we have to sit and wait for Thor and Iron Man to prove just how tough they are by kicking the shit out each other while their captured bad guy waits around patiently, it's a bit stupid. The issue with any of these can't-be-killed-so-why-the-fuck-should-I-care movies (I'm looking at you, Ghost Rider) is that they usually have to have some bad guy even tougher or stronger so that you at least kid yourself that the ending's not going to unfold exactly as you expect it to.

When our good guys are beating themselves up, and you just know seconds afterward they'll be in some conference room hatching a plan, then it turns to Glee levels of fucking annoying, where some teacher plooking or incest subplot gets resolved before the next commercial break, with everyone suddenly breaking out into song.

Yeah, I compared Avengers to Glee. Suck it.

However, even before that stupid "drama" with our heroes, we've got Sammy J getting shot, and then, you know, just kind of ignoring it. I don't pretend to know any backstory, whether Fury is in fact some immortal guy who gave up an eye for being able to survive being shot without obvious medical care, but you know what would have really made for some awesomesauce? Killing Mr. Fury two minutes into the film. Bam! Deep Blue Sea, fuck you style. Instead, even the CEO of this ragtag bunch seems immune from any real harm that isn't ocular. That, or the bad guys just got to learn to shoot the dude in the fucking face.

In this very same scene, we've get ye olde "zombie" trick filled with Indy allusions - I swear that must have been pitched as Loki takes the Staff of Ra and does a full on Temple of Doom on Hawkeye's ass (or, well, chest). Oh, noes, how ever will there come a time when such thing is reversed, perhaps inadvertently, hopefully so that the finale can happen with everyone on the same team? Blargh. You know what would have been cool? Loki does his magic shit, and the, Bam! Fury's dead. Can't take that back, bow-and-arrowman. You killed Mace Windu. And now, at least, the film would have earned this stupid comic book-y conceit.

I liked ScarJo's tuchas, and even liked her opening scenes doing her version of Craig's version of James Bond. I think the 15 minutes or so where Robert Downy Jr. does his thing is fabulous, and I'm super pleased they used the big green guy kinda like they used shark in JAWS. I like when Hulk punched Thor, ending a boring conversation pretty damn quickly. I like that there are people that don't know what the hell is meant by "quim", and now are forced to look it up.

I even kinda liked the preposterous ending, with an invading army conveniently keeping to a few city blocks as they smashed the shit out of NYC. Sure, it's Phantom Menace by way of Ghostbusters II (thx for the latter, AP), but giving the proper scope of many, many opponents to our ensemble of heroes is what the film was always meant to embody.

I'd slash about an hour from the film, take out some of the more stupid, trying-too-hard lines that'd make Diablo Cody barf. I think the flying ship is pretty stupid even by Marvel standards, and maybe a few set pieces from that sequence could be dropped. I think it's OK that they killed off one favourite character, I just think it'd be cooler if they killed off a few more, showing actual balls about what they're prepared to do.

For those that have got this far and really haven't seen the film, then please, go, enjoy. The 3D's very good, the soundtrack decent, the graphics and visual design certainly capable. Stuff blows up, you see guys in tights do battle against a horde. Stick around for the credits, and you'll get some bad guy that I really thought was Red Skull's brother, but what do I know. I understand there's a scene of the guys sitting around eating shawarma, something truncated from the pre-screening and something I'd have enjoyed to see. Hell, wouldn't you like to see the team go bowling, or ride in bumper cars?

Avengers is not the worst film you'll see this year, not even the worst one you'll likely to see this summer. Nor, I'd suggest, is it the best. The trailer for Dark Knight is more exciting than any moment in this entire film. I also anxiously await, more than some await the birth of their child, Battleship, that film that seems to know exactly what it is (Battles... Ships... what else do you need?)

You're welcome to comment below, tell me all the subtle things I missed and jokes I didn't get. Frankly, I welcome your scorn and your vitriol more than I do a sequel.

For me, when all is said and done, Avengers is all sound and Nick Fury, signifying nothing.