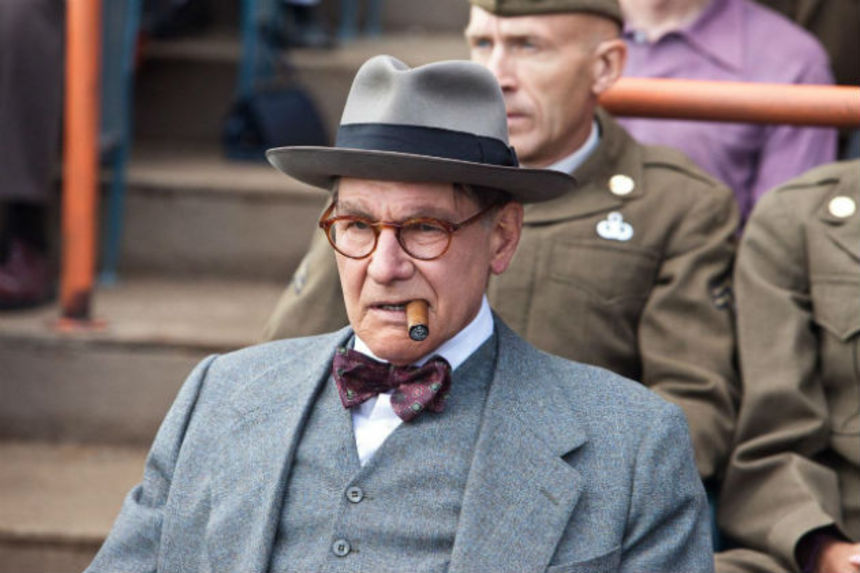 When did Harrison Ford get so grouchy?

The trailer for 42, Brian Helgeland's bio-pic that opens on Friday, April 12, reveals Ford as the growling, threatening Branch Rickey, the real-life Brooklyn Dodgers baseball executive who picked Jackie Robinson as the player to break the sport's color barrier in the late 1940s. The anger that apparently streaks through Ford's performance is not unique to his latest film; indeed, it's a personality trait abundantly evident in his three most recent roles.

But it's also a tendency that has marked the work of the actor, now aged 70, for four decades, and seems to indicate that he has no interest in aging gracefully as he slopes toward the end of his career. And it could point the way forward for his participation in Star Wars: Episode VII. 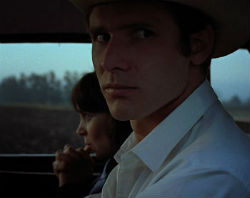 Ford exhibited his particular brand of sullen seething in George Lucas' American Graffiti (1973) as Bob Falfa, a shadowy figure who drives a "wicked" '55 Chevy and is intent on beating John Milner (Paul LeMat), the long-recognized fastest driver in the Valley. Francis Coppola made good use of him as another shadowy, threatening presence in The Conversation (1974). His portrayal of Han Solo in Lucas' Star Wars (1977) pushed the dark anger into the background; along with his performance as Indiana Jones in Steven Spielberg's Raiders of the Lost Ark (1981), it established Ford's popular persona: a swaggering adventure hero brimming with confidence, impatient with weaknesses -- including his own minor fears -- and a ladies man who was only reluctantly romantic.

Adjusting this persona over the next 20 years to one degree or another, Ford sometimes played roles that edged toward harshness (Blade Runner, The Mosquito Coast), and other times introducing greater fallibility than seen before (Working Girl, Regarding Henry, both, not coincidentally, directed by Mike Nichols). In my mind, he reached the peak of his career in The Fugitive (1993) and Clear and Present Danger (1994), films that perfectly melded Ford's star personality with action that played against that same type.

As a commercial force, Ford's fortunes declined steeply after What Lies Beneath (2000); regardless of the quality of the film or the actor's performance. (Kathryn Bigelow's K-19: The Widowmaker is better than its middling reputation might suggest, though there's no saving Hollywood Homicide and Firewall from the rubbish heap.) Note that Crossing Over, filmed in early 2007 but not released for two years, fits into this group as well.

In 2008, Indiana Jones and the Crystal Skull revived his fortunes. His subsequent choices suggest that playing the iconic character was the latest turning point for Ford; since then, he was settled into supporting roles that emphasize what we expect from grumpy old men past retirement age. 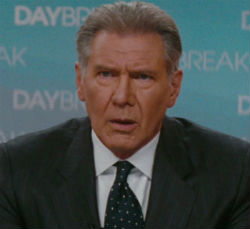 What becomes apparent after watching that trio of films is that Ford makes for a marvelous villain -- if only he committed fully to his malevolent side.

He starts off in Extraordinary Measures as a medical researcher who is more interested in pure science, and results, than in any of the people who may be affected by the success or failure of his experiments. He is described as 'the 3rd worst person in the world' in Morning Glory and his uncooperative, nasty manner gets him upgraded to 'the worst person in the world,' in the words of his putative boss. He is cruel and murderous in his opening scenes in Cowboys & Aliens, a truly fearsome leader.

But the characters played in those films by Ford, a consummate movie star, all turn out to have human hearts; their sympathetic sides shine through, so that it's clear they are not bad guys. Instead, they are good guys who have a hard time expressing themselves; thus, their grouchy disposition is painted as a likable personality trait.

Perhaps this is how Ford wants to be remembered. The marketing material for 42 certainly suggests a similar character arc for Branch Rickey, and something similar can probably be expected from Ford's upcoming role in Ender's Game, in which he'll play the commander of a battle school for young people.

And it could indicate how Ford will be playing Han Solo in Star Wars: Episode VII for director J.J. Abrams. Abrams wrote Regarding Henry, back in the days when he was credited as "Jeffrey Abrams," and that picture gave Ford a brief opportunity to play a high-powered attorney who deals with people in a high-handed manner, before he is shot in the head during a convenience story robbery and magically transformed into a gentle, vulnerable soul, forced to learn again how to talk and do simple tasks, like tying his shoes, just like a child.

I can't imagine that Han Solo will be reduced to the level of a child. Most likely, he'll be gruff and appear to be iron-hearted, until something happens that reveals his humanity, which is another explanation for the grouch-ification of Harrison Ford: it's another path to the same target of wide audience appeal that he has followed for 40 years.

Hollywood Beat is a column on the film and TV industry. 42 opens wide across North America on Friday, April 12.

Do you feel this content is inappropriate or infringes upon your rights? Click here to report it, or see our DMCA policy.
Harrison FordBrian HelgelandChadwick BosemanNicole BeharieChristopher MeloniBiographyDramaSport