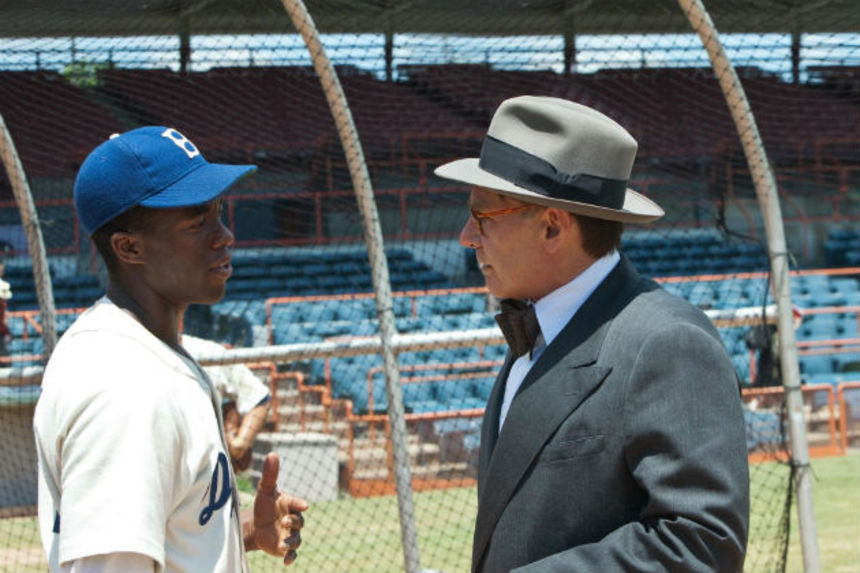 The closest 42 comes to revealing anything about the actual personality or character of Jackie Robinson -- the first black player in Major League Baseball -- is when he privately expresses frustration at being beholden to someone for a kindness. "I don't like needing anyone for anything," he says. It's like the classic job interview scenario. What's my biggest weakness? Well, sometimes I'm too good at being independent and self-sufficient.

Not that I expected (or wanted) a movie about the dissolution of baseball's color barrier to dwell on Robinson's personal shortcomings. You go into a film like this anticipating a pleasant, shiny history lesson and some warm feelings about how a noble spirit embiggens the smallest man, etc. 42 delivers on that, more or less. And besides, I don't know anything about Jackie Robinson as a person. Maybe he WAS a flawless human being with no interesting imperfections.

But surely writer/director Brian Helgeland (A Knight's Tale, The Order) could have found more drama in this inherently dramatic story than is on display here. Robinson, played by charismatic big-screen newcomer Chadwick Boseman, is in the Negro Leagues in 1945 when Brooklyn Dodgers general manager Branch Rickey (Harrison Ford, in bushy eyebrows and a comedic "old coot" voice that's a mixture of John Goodman and Clint Eastwood) comes calling. A devout, Bible-quoting Methodist, Rickey has moral objections to baseball's unwritten rule against black players, and economic ones, too: "Dollars aren't black or white," he says. "They're green." There are lots of black folks in New York, and you can bet more of them will come out to Dodger games if the Dodgers are the first team to hire a black player. 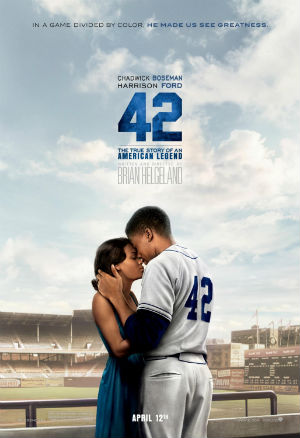 What Rickey needs is a Jesus-like figure who can not only play baseball really well but also withstand the taunts, abuse, and scrutiny without fighting back. Rickey knows, and he convinces Robinson, that even justified self-defense against bigots in the stands and dugouts will reflect poorly on Robinson in the public's mind. People will remember that he yelled at a guy, not that the guy insulted him first. Robinson agrees to turn the other cheek.

Is this hard for him to do? Yes, but like most elements of the film, it's conveyed in one simple, easily digestible scene, without much drama. The Phillies' manager, Ben Chapman (Alan Tudyk), stands near his dugout while Robinson is at bat, yelling the N-word at him over and over again. (I can picture Tudyk's agent: "You have 300 words of dialogue in the script, and 275 of them are "n*****.") Robinson controls his anger, then walks into the tunnel under the stands and smashes his bat against the concrete wall in fury and frustration. That aspect of the story has been checked off. Moving on!

But some of Robinson's early scenes give Boseman a chance to shine. One of the best involves Robinson's first time at bat for the Dodgers' minor-league affiliate, when he gets on base and immediately starts testing the limits of what he can get away with. Boseman's playfulness is a joy to watch, and the sequence hints at Robinson's stubborn, mischievous streak. It's gone all too soon.

Still, to criticize 42 very harshly would be like kicking a puppy. It's too nice, too well-meaning to warrant dislike. Robinson's fellow Dodgers, including Pee Wee Reese (Lucas Black) and Ralph Branca (Hamish Linklater), support him nicely against the objections of the bigoted players, who all get their comeuppance, you can be sure. The obstacles Robinson faces are presented as minor hurdles, with Robinson's ability to overcome them a foregone conclusion. Perhaps fearful of being disrespectful, Helgeland is instead overly cautious, refusing to dwell on the hardships for more than a moment before he handles them. There's very little dramatic tension, but hey, it's a nice story about nice people who do nice things.

42 opens wide in theaters across North America on April 12.