Washington D.C. Is A Terrible Place To Live. WHITE HOUSE DOWN Trailer 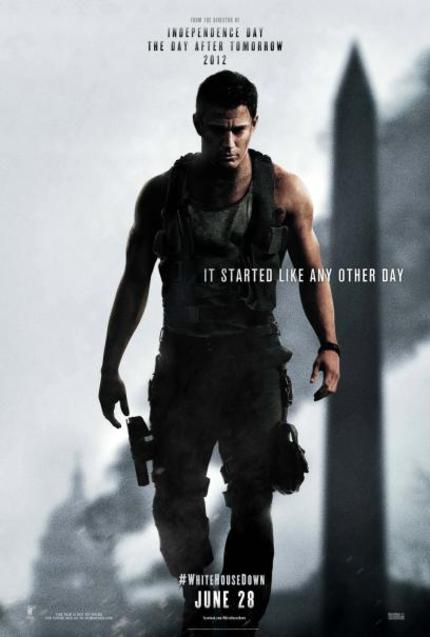 In another case of Armageddon VS Deep Impact, Abraham Lincoln: Vampire Hunter VS Lincoln, Hollywood has graciously decided that we the public need not one, but two films about terrorists attacking Washington D.C. head on and taking down the White House. The Die Hard-ish Olympus Has Fallen opened recently to relatively positive reviews, with our own Jason Gorber practically creaming in his pants over it, and the general feeling is that it's a successful action romp that doesn't take itself too seriously.

Then we have White House Down, where uber-patriotic Roland Emmerich is at the helm dealing with what seems on the surface to be the exact same scenario. But my feeling is that it will have a much serious tone. Here we have Channing (The Neck) Tatum playing a police officer thrust in the middle of the action, kicking some terrorist ass with some spectacular visuals.
The cast is pretty stellar, with Jamie Foxx as the president along with Maggie Gyllenhaal, James Woods and Richard Jenkins.
Now my main complaint about Roland Emmerich films is that their trailers are usually incredibly good -- the man knows how to hook your face to the screen and pump up your expectation -- but then the final product has some spectacular scenes that quickly get bogged down in melodramatic drivel. My fear is that this will be no different. But until we see the film we can look at the pretty pictures in the trailer below, which is pretty awesome.
Tweet Post Submit