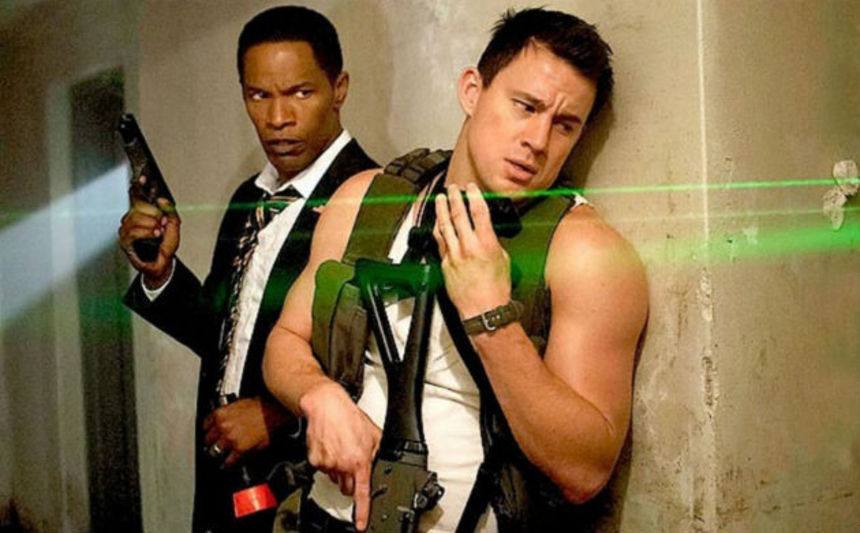 Way back several weeks ago, somewhere near the Ides of March, a magical little film was released about a bunch of terrorists taking over the White House. It was big, brash, bold and sometimes quite preposterous, but there wasn't a frame out of place, a cliché not mined to its fullest extent, nor an explosion held back. Olympus Has Fallen proved to be both visceral and kind of magnificent in its own way, living up supremely to the films that it borrowed heavily from.

Several of those definitive blow-stuff-up-real-good movies have been directed by Roland Emmerich. After all, the very notion of the complete obliteration of the White House is kind of his schtick, after Independence Day made that the core image of that film's release. It's fair to say then that I went in with appropriate levels of anticipation, hoping for a big, bombastic action film that would make for an excellent pair with the earlier Capital-in-crisis flick, but with the added bravado of one of cinema's most immoderate of action directors.

Alas, White House Down, despite some fun moments, falls flat. Even Channing Tatum, who's been in a string of fabulous performances, can't quite rescue the film, as much as he tries.

While obviously an accident of scheduling, it's nonetheless inevitable for anyone who has seen them both to compare what Olympus Has Fallen got right and White House Down did not. Olympus Has Fallen starts with real drama, a great car sequence that ends up having truly dramatic consequences for our leads. It's expositional, sure, but done with enough finesse that the inevitable callbacks seem earned. White House Down, on the other hand, has a clunky and awkward first sequence, with so much foreshadowing that it does what I like to call "fiveshadowing", practically beating the audience over the head with piece after piece of plotting. There's little that happens at the beginning that's of consequence or interest, it's all just dull procedure setting things up for later payoff. 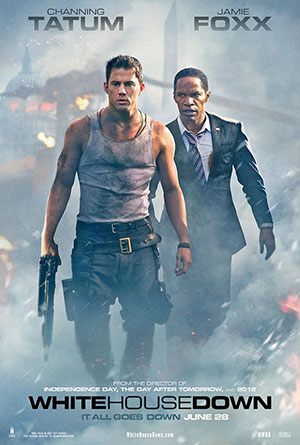 White House Down's script hints more than a little bit at the proclivities of the current American president, from Nicorette gum to his nuclear makeup. I think Jamie Foxx is a tremendous actor, and adore him in a number of films, but it seems every time he tries to do "executive serious" he comes across as his version of Ray Charles, but this time with launch codes and Air Jordan sneakers. Maggie Gyllenhaal is as tough to love in this film as it is to believe that she's actually doing the job she's pretending to, yet James Woods seems even farther out of his element than her. A slew of other, often excellent actors, from Richard Jenkins to Lance Reddick to Jason Clarke, do their best with a clunky script that both tries to do too much and too little at the same time.

For such a drama, the film is surprisingly lax in actually following through with its premise. There's a sense that not too many people are actually put out by the incident, save for some wide shot of panicked civilians. Again, if Olympus Has Fallen went mildly overboard with the slaughter, it's equally fair to say that this siege film is made to seem almost chaste. When even an airplane tucks behind the clouds to politely extinguish the lives of all aboard away from our prying eyes, you know things aren't quite what they should be for a film of this ilk.

Even as a big, dumb action movie the film fails to impress. Tatum and Foxx do their best cat-and-mouse for a good chunk, but there's never really a moment of tension. Hell, even lines of dialogue are telegraphed so badly that I began to recite them in tandem just to see how often I could predict the zinger (I did so, of course, with respect for my fellow theatre goers, if not giving so much respect to the script). Emmerich can't help himself when making an especially clunky reference to ID4 presumably as some sort of meta commentary that in the end really doesn't go anywhere at all.

Still, we get to see "The Beast" do donuts in the Rose Garden, and a few zippy low angle shots through the streets of DC. What we don't get are any sustained moments of tension, or any real sense that anything that's going on will actually matter. Even the silly twists aren't particularly interesting, with the vast majority of them almost laughably easy to predict.

Maybe there's an audience for this film, wanting to see Tatum do his best Bruce Willis, complete with soiled sleeveless undershirt. Yet if Olympus Has Fellen was a glorious recapitulation of what made Die Hard work so beautifully, White House Down is a reminder of how sanitized and frankly boring many modern action films, including those in the Die Hard franchise, have become.
White House Down opens wide in theatres across North America and many other territories on Friday, June 28.