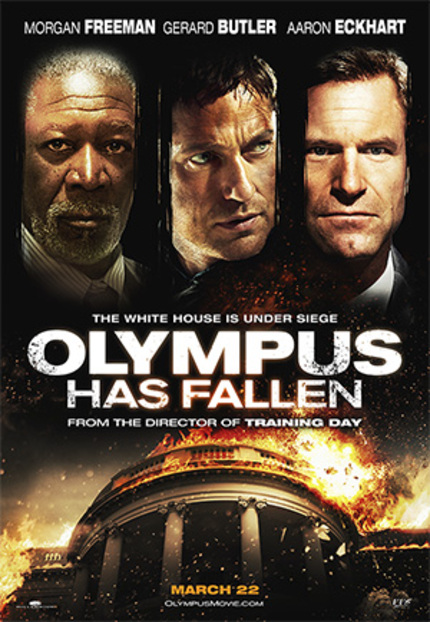 I think the only proper way to fully convey the power, the majesty, the sheer awesomeness of Olympus Has Fallen is to do so with the same level of bombastic hyperbole that the film exhibits. It's as if the only way you can really sum up your experience of seeing this Die Hard-in-the-Whitehouse masterpiece is to talk in poster pullquotes. For example:

"Butler serves up action on a silver platter in Olympus Has Fallen!"

Now, that's obviously a not-so-clever pun on the name of our McClane substitute, but the sentiment remains. Gerard Butler chugs through the film with an incessancy that would make any McTiernan fan proud, totally nailing the vulnerable-yet-invincible dichotomy that's at the heart of this type of film.

"The White House runs red with blood in this Olympian battle!"

One pleasant surprise about the film is that it really doesn't shy away from being brutal. I mean, if you're going to take over the entire security apparatus of the residence of the commander in chief of the United States, there's going to be a pretty high body count. Still, the fact that the film isn't afraid to have real carnage show up on screen is a testament to, I dunno, it's malevolence? It's capacity to entertain? I'll let you decide. It's certainly not neutered, and that's certainly a good thing.

Ok, that's unlikely to be on the poster, but the fact remains that I was pleasantly surprised to see the man whose films I generally despise behind the lens of this work. I hated, hated Training Day, with a vitriol that turned to disgust when Denzel walked away with golden trophies for his performance. I dislike the whole notion of a Fuqua film that I may have even skipped this screening had I paid enough attention to remember he was directing it.

I'm glad I didn't know, because I could then sit back and enjoy what's a pretty tight, very well assembled action piece. There's stunts aplenty, the action sequences aren't just a mass of quick cuts and motion blur. Maybe some of that McLane goodness rubbed off on Antoine while making Tears Of The Sun? At least then something good would have come out of that project.

"A titanic cast climb the heights of Olympus!"

If you start adding up the accolades of the cast of what's at its core is a silly action romp, it becomes mildly mindblowing. Sure, Butler hasn't been vying for awards gold, but it's kind of a shame that Aaron Eckhart doesn't have any big trophies yet, if only for his astonishing performance in Rabbit Hole (I blame The Core, frankly). When your secondary characters include a regal Morgan Freeman, a piercing Angela Basset, a punchy Dylan McDermott and a completely hysterical Melissa Leo, you know you're in for a fun time.

No, really, you should see this film if only to see Leo do what she does in this film. I can only imagine Al Pacino during his Dog Day Afternoon era would have done similar things with the part, and it all kind of works out despite the histrionics. Rick Yune, who has been in a slew of genre flicks, is perfectly acceptable as the lead bad guy, bringing enough intensity to give at least a sliver of credibility to the role. Plus, just a week before I was watching Jackie Brown, thinking, man, we need to see more Robert Forster. Wish granted!

Even if I do have a soft spot for both "Simon Says" and "Jumping Onto A CGI Plane" versions of that particular franchise, this film really does trump them. Simply put, Olympus does Die Hard better than any of the sequels, including the (fine) second installment. It gets the tone right, it gets the violence and one liners right. Story wise, performance wise, even how it's shot, shows a keen eye for what at a deep level made the first Die Hard work. I'd go so far as to say this is the best reimagining of the Die Hard formula, without it ever coming across as slavish or redundant.

"Best action movie of the year!"

Now, the year is young, and there's loads to come out, but there's a strong argument to make for this claim at this spot on the calendar. I still really loved The Last Stand (even if not enough of you went out to support it, damn you), but this film may be even more entertaining. Sure, there's about 10 minutes of Olympus that could be tightened up, but that's just picking at nits.

There's helicopters and missiles and guns and suicide bombers and all kinds of other things that go boom. There's car chases and running through ducts, cussing and sweating and bleeding from numerous wounds. There's a plausibly implausible high concept threat with a hoary ticking timebomb trope that somehow manages to be engaging.

This is a film where a bunch of very talented people set their eyes on doing the best damn job they can to create a plausible world for this preposterous story, and for the most part they completely nail it. There's little in the way of winks or nods, nothing to come across as smug. Nor does the film treat its audience like idiots (hello, Evil Dead), as we get reasons, even if kind of comical ones, for almost every motivating element of the storyline without being bogged down in exposition.

The film has a compelling drive, and an incessancy that's downright refreshing. Plus, the fact that this is but the first of two take-over-the-US Capital films coming this year (hello, White House Down) makes this almost more awesome. We'll have to wait to see which one is the Deep Impact to the other's Armageddon, but even with a certain Freeman's involvement, I'm not willing to prejudge.

It's not going to win any awards or be taken seriously by many, but Olympus Has Fallen is the real deal, a head down, go-for-it action movie that's entertaining without making you feel stupid. While my pull quotes in this review aren't likely to show up on any poster or Blu-ray case, I hopefully can convince you that you should spend hard earned money and buy a ticket for the film. I'll leave you with these words of wisdom: