Review: ANGEL HAS FALLEN, AKA #fakenews The Movie 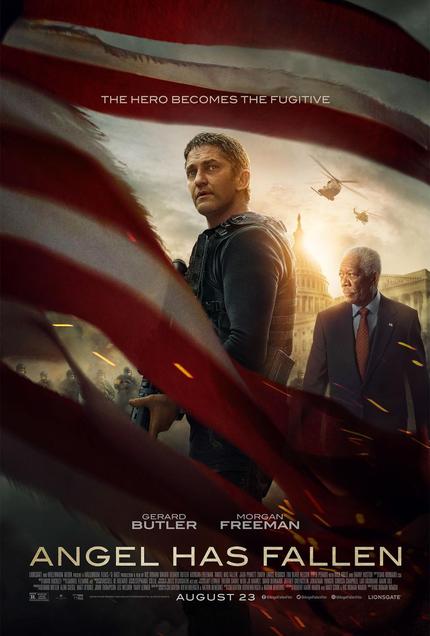 It seems only fitting that a film so intent on parroting right-wing conspiracy theories in the guise of entertainment should be just as transparent and incomprehensible as the people who proffer such theories to the public in real life.

The third in a series that should never have made it beyond a single outing, director Ric Roman Waugh's Angel Has Fallen follows the continuing adventures of Secret Service bad-ass Mike Banning (Gerard Butler) as he attempts to protect president Allan Trumbull (Morgan Freeman) from yet another assassination attempt. Only this time, Banning is the prime suspect and he has to simultaneously attempt to clear his name and keep Trumbull out of harm's way in this ridiculous action trash that I'm already tired of writing about.

When Trumbull nearly meets a messy end at the hands of a fleet of explosive drones, all physical evidence points back to Banning. And so, in spite of having put his life on the line in a very public way at least twice for his president and his country, he is targeted by an FBI agent Helen Thompson (Jada Pinkett Smith) who gives zero fucks about his heroic history, and instead gives in to a story about opioid addiction, doctor shopping, and Russian mercenaries that she can only partly substantiate.

With Thompson and the full weight of the FBI on his tail, Banning strikes out Rambo-style into the woods to contact an old acquaintance who might be able to help him straighten things out. But it only makes matters more complex and before long Banning gets busy blowing up every goddamned thing in sight in the name of justice.

Meanwhile, an old associate of Banning's and leader of a Blackwater-style private security firm named Wade Jennings, is acting suspiciously. With implications of Russian involvement, and the US military stretched thin playing cops and robbers for the entire world, it looks like Jennings might be in the right place at the right time to make a killing, should the war kick off. Seems a bit too convenient to be true, but what would an action movie be without a few contrivances?

I don't mean to play spoiler for any film, but in the case of Angel Has Fallen, the film does the job for me. Within the first fifteen minutes, it is abundantly clear who the enemy is, why they did it, and how the whole thing will end. This movie has perhaps the worst poker face of all time. The cringiest part about it is that pretty much all of the major twists can be predicted by anyone with a working knowledge of right-wing political conspiracies.

Angel Has Fallen is the political action thriller equivalent of a faith-based film. Russian collusion, deep-state political conspiracies, good guys with guns, all of the major political flash-points are there occupying exactly the space you'd expect them to in a movie like this. If it were cleverly written, entertaining, or even effectively shot it might've gotten a pass as a brainless popcorn action movie, but the utter incompetence of the whole project makes this one a real grind to get through.

The multitude of action sequences are shot so poorly there the audience has no idea what is going on or where at any given point. We move from one geographically unremarkable location to another, waving the camera around like a madman, almost daring the audience to try to catch up. By the time the final conflagration in a hospital occurs, they don't even bother trying to make heads or tails of what's on screen, and instead just flood the entire frame with absolutely terrible CGI smoke. It's as though the FX artists saw the first eighty minutes of the film and realized it was a sinking ship and just threw some Windows 95 screensavers up there and called it a day.

When it came to 2013 action thrillers about a white secret service operative saving a black president from a terrorist attack, Olympus Has Fallen clearly came in second in a two horse race. It's a damn shame that it has been given the life that should've belonged to White House Down. With this third installment, the series, truly Has Fallen about as far as it can go. Let's just hope it knows to stay down.

More about London Has Fallen