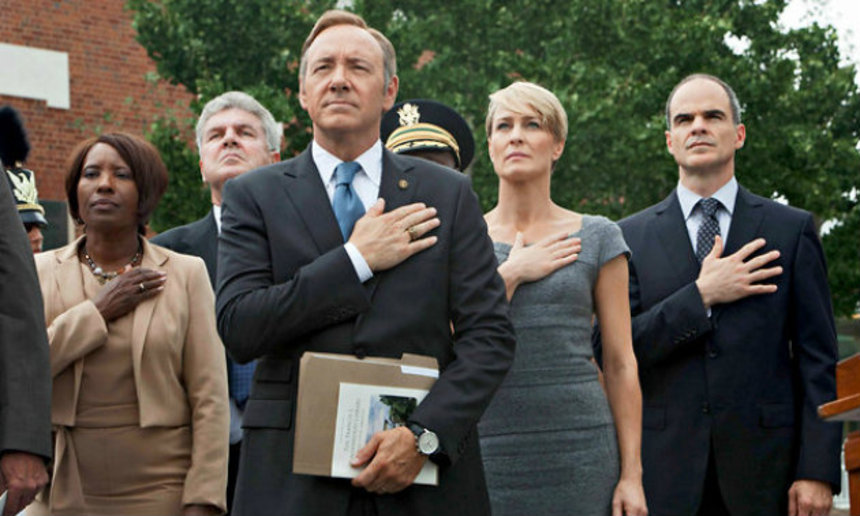 House of Cards started with two gangbuster episodes, both directed by David Fincher. Fincher serves as an executive producer, along with Kevin Spacey, Beau Willimon, Eric Roth, Josh Donen, and others, for the Netflix original series; all 13 episodes debuted on the same day to allow for binge-viewing. Thus, I did.

Though I did not come away completely sated -- it's important to note that the series has a two-season commitment, so another 13 episodes are coming -- the series as a whole is completely absorbing, offering a multitude of pleasures. Most especially, House of Cards allows the opportunity to savor finely-tuned performances by Kevin Spacey, Robin Wright, and Corey Stoll, who form three-fourths of the primary storylines of the first season.

As I noted in my review of Episode 1, Spacey plays Francis (Frank) Underwood, the Majority Whip of the U.S. House of Representatives, a veteran politician from South Carolina who has been promised a nomination as Secretary of State after the Presidential election. Francis soon learns, however, that the President-Elect has other plans for him, and that prompts Francis to make plans of his own. He plays his cards close to the vest, however, apparently only revealing them to his wife and his trusted assistant Doug Stamper (Michael Kelly). His true intentions, however, are rarely laid plainly on the table, even for his confidants.

Wright plays Frank's wife Claire. She's the head of Clean Water Initiative, a non-profit organization, and, while she is a more-than-capable partner for Frank, she is not always an equal partner in the decisions "they" make. Frank always put his political interests ahead of hers, which hampers Claire's ambition to grow the charity outside the U.S. She has sublimated her personal frustrations into her work, but Frank's plans cause her to rethink her priorities.

In my initial review, I referred to Congressman Pete Russo (Corey Stoll) as a "stock cliche ... a politician who is a scandal waiting to happen." As the storyline plays out, however, his character is revealed to be much more than that -- more layered and unpredictable -- and proves to be a linchpin for the entire first season.

Finally, journalist Zoe Barnes (Kate Mara) takes on a prickly adversarial role, kissing up to Frank in hopes that he will supply her with the insider information she needs to further her ambitions. She is also shown to be a complex character whose motivations appear to shift throughout the first season. Is she honestly digging for the truth? Or is she coldly building her career? Or both? 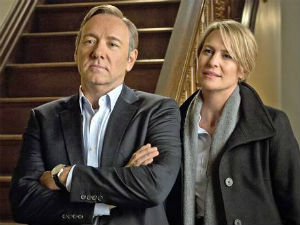 Fincher's superb visual storytelling skills overcame moments in the first two episodes that felt rote and routine. By their very setting, political dramas are inevitably tied to certain stereotypes: politicans are slick and artificial in public, authentic and "real" in private; politics is a dirty business and only those who are willing to cut throats prosper; friends can become enemies in the blink of an eye. In large measure, House of Cards adheres to those stereotypes, which lay a blanket of predictability upon the enterprise.

The true surprises come, then, not in the main narrative, but in the bracing wit and elegance of the dialogue (snappy comebacks, witty conversation, clever double entendres, heated arguments) and in the margins of the story, filled with characterization and atmosphere. If too much is told rather than shown, that may reflect the nature of television, where the complete season is rarely, if ever, written completely before filming begins.

The rough spots are (mostly) covered up in Episodes 3 and 4, directed by James Foley, as well as Episodes 5 and 6, directed by Joel Schumacher. Thereafter, the tone swings back and forth as the story develops further; Episodes 7 and 8, directed by Charles McDougall, are less distinguished, then Episodes 9 (Foley again), 10 and 11 (both by Carl Franklin) stage a comeback, surging with emotional kicks that reflect the twists and turns of the drama turned thriller. The first 11 episodes also feature the very fine work of cinematographer Eigil Bryld.

As the series heads toward its first season end in Episodes 12 and 13, under the direction of Allen Coulter, they become more plot-heavy, and more dependent on certain developments that were less satisfying in a dramatic sense. Perhaps those will prove to be wise decisions in the context of a two-season series, perhaps not, but in an effort to avoid major spoilers, I'll say that I'm in the "not" category, but ready to be proven wrong. And I'm definitely eager to watch more of those great performances by Spacey and Wright.

Going behind the scenes for a moment, after independent studio MRC bought the rights to the 1990 BBC mini-series and declared their intention to make a new version, Donen and Roth brought the idea to Fincher, and then they got together with MRC. Fincher, Donen, and Roth liked Willimon's play "Farragut North" (adapted into George Clooney's The Ides of March) and brought him on the project. Netflix got involved, and then offered a two-year commitment, 26 episodes in all. 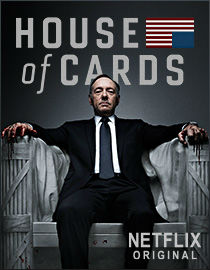 In an interview with Alan Sepinwall at Hitfix, Willimon says that Netflix offered little in the way of notes, leaving it to the creative people to make the series. Without knowing in advance that Netflix would make all 13 episodes available at once -- that decision didn't come until about halfway through production -- Willimon explains: "We always thought about it as like a 13-hour movie."

Indeed, House of Cards plays more like a movie than an episodic television series, without the flashbacks or callbacks that are commonly used to remind viewers of what has come before, possibly weeks or months in the past. That may also explain why Episodes 7 and 8 sag to a degree; in effect, they are the extended equivalent of slow moments in a normal, more compressed story arc.

No science or algorithm can replace the art of storytelling. Despite Netflix's well-earned reputation for being guided by data, House of Cards is a compelling watch on its own merits, an in-depth examination of manipulative characters and their effect on the people they love, and those they hate. It's powerful stuff, the kind that makes for sleepless nights -- at least for 13 hours.

House of Cards is available for streaming exclusively through Netflix.

Do you feel this content is inappropriate or infringes upon your rights? Click here to report it, or see our DMCA policy.
David FincherHouse of CardsKevin Spaceynetflix