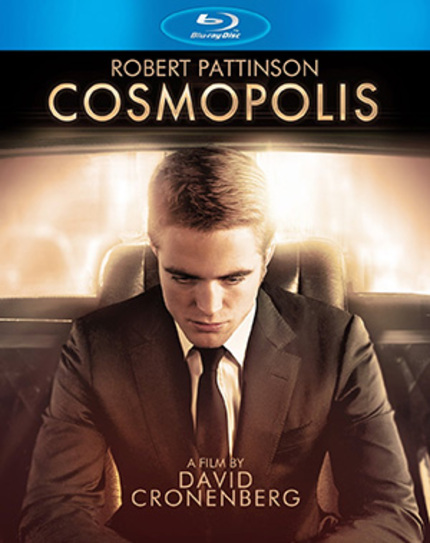 For those of us in Toronto, it's easy to take for granted what David Cronenberg's Cinema has meant for the rest of the world. One of the few truly great international filmmakers to come out of English Canada, his films are often challenging, cerebral, and stamped with a sense of the darkly macabre.

Of late, the director has seen a slight shift in the tone of his work, and his collaborations with Viggo Mortensen (A History of Violence, Eastern Promises and A Dangerous Method) point to a slightly different direction than some of his earlier, more explicitly horrific films.

Cosmopolis serves as another shift in kind, an overtly claustrophobic piece almost entirely set inside a white limousine (the fact that the film premiered alongside the needlessly lauded Holy Motors at Cannes 2012 proved not particularly advantageous for the film's reception). Drawn from a 2001 novel by Don DeLillo, Cronenberg claims to have written the script in a mere six days, basically transcribing the dialogue from the novel into screenplay form [more on this in our interview from Spring 2012, and this article by ScreenAnarchy's Joshua Chaplinksy].

I'm probably among the few that didn't like either limo film. Having seen DC's film first, I at least didn't have to overtly compare the two works, but found its ponderous tone and sterile look simply not up to par. This is the first work that Cronenberg and his long-time cinematographer Peter Suschitzky have shot on digital, and I agree that in theory the sleek palate and greenscreen background does create an unsettling look. However, I found it more amateur than stylish, the inventiveness of the shots less pleasing than I'd have expected from such masters of the form.

Fundamentally, however, my issue was with DeLillo's novel. Prescience aside, I just found it pretty damn boring, a kind of generic screed with not nearly the power or cleverness that it seems to claim for itself. I have zero doubt this is among the most authentic, capable translations of DeLillo to the screen, if anything it just proved that I don't like that DeLillo guy. And, yes, I was able to parse the overtly, darkly comic elements of the work, but I found most of the humourous story elements fell flat.

I've long been a champion for Crash and Existenz, even finding the latter superior to The Matrix which came out the same year ("Whoa", indeed). With both of these earlier works, I think Cronenberg was more adept at finding a balance between the slyly comical and the drearily pedantic. Similarly, his translation of Naked Lunch to screen is eminently watchable, taking a mostly incoherent tale and injecting it with rambunctious style.

Alas, despite some fine performances by an ensemble cast, with a stalwart lead in a superbly cast Robert Pattinson, the film ended up being a wash for me. That said, I do hope Cosmopolis marks the start of a fruitful working relationship, and would like to see what the two might do together in the future.

Like any of the great director's works, Cosmopolis is a film well worth seeing. Unfortunately, I see it as more as a failed experiment in cinematic austerity than something worth watching multiple times as per many of his other works. Still, I applaud the effort, but would suggest that perhaps this story simply wasn't one worth telling on the big screen, no matter how accomplished the filmmakers behind the attempt.

Given the overt push to artificiality of the surroundings (the greenscreen backgrounds out the limo's windows are meant to be surreal), I can safely say that the film looks as good as it was meant to, with weird crushed shadow details and the occasional blown highlight.

The DTS-HD MA audio track is effective if not showy, given the unique decisions regarding the sound design (a topic covered in the documentary). The score is a mix of traditional orchestration and more "dance" oriented techno, with Cronberg's usual composer Howard Shore writing music for Toronto band Metric to perform. Again, it's hardly the stuff to show off your system, but it does the trick.

Supplemental Materials
Ah, here's where things actually get more interesting. For as much as I didn't love the film, I have to applaud EOne and DC's team for including an almost 2-hour making of documentary. Full disclosure, I happen to know Julie Ng (director/editor) and Mike Lane (co-editor) from around town, and I'd heard that they had done some EPK stuff for the disc. I was unprepared however for the quality of this feature length look at Cronenberg and his process.

Called Citizens of Cosmopolis, this is one of the finer supplements to any disc of late, easily comparing with the type of material that Criterion in their prime would generate. Part of what makes it so special is that it was clearly done with the blessing of the cast and crew. More than a simple addendum to the production, this very much feels part of the film, a kind of capper that in many ways is more enriching than the film it talks about.

Mixing on-set material with talking head interviews, the documentarians wisely mirror the same arc as the film. It's notable that Cronenberg shot his film in chronological sequence: the doc unfolds in the same way, allowing us to see everything from the director setting up shots from the comfort of his trailer to finding the right angle for a prostate examination scene. With clips of Cronenberg interacting with his dedicated crew (some of whom go back to the earliest days of his career) we get a real sense of what it's like to be on set during the making of the film. The doc is of that classic "film school on a disc" style, and it's the stuff we used to get way back in the Laserdisc days, from directors who cared more about telling a good story than simply squeezing out 10 minutes of on-set fluff.

Sure, a few minutes here and there could be tightened up, but in this mega supplement you see and hear pretty much everything you'd want to know about the project, told in an engaging manner. Most remarkably, in such a free form way you really get a sense of the Cronenberg I've seen in a number of other settings: dry and laconic in a way that's rarely so openly displayed in interview situations.

Even if you didn't like the film very much, this is still a doc for even casual fans of the director to enjoy, and worth the purchase price of the disc on its own.

There are also half an hour or so of interviews, mostly extensions of conversations that are used judiciously in the doc. It's probably best to revisit these long after you've seen the doc, as it can become a bit repetitive.

Similarly, while I'm usually a big fan of Cronenbergian commentaries, the one included on this disc is pretty superfluous given the extentive work in the doc. We get similar stories told in similar ways (watching Das Boot and Lebanon in preparation is something I particularly appreciate). It's inclusion is welcome, but hardly necessary.

A relatively minor chapter in what is an incredibly vital cinematic legacy, Cronenberg's Cosmopolis, as per all his films, still warrants a single viewing. More pleasing is the extensive supplementary documentary, making the decision to go and purchase the disc even easier.