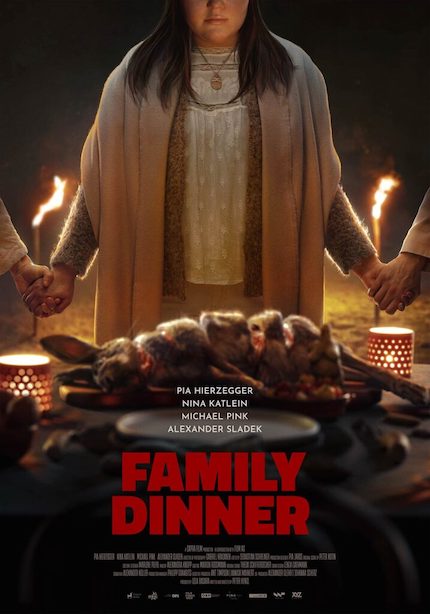 Horror movies featuring a special emphasis on food and food-related issues have been in plentiful supply the last few years.

There have been others but thus far few have tackled the obvious: food, social expectations and body image. Writer/director Peter Hengl has done so and set the bar high for those who follow. Family Dinner is a rich and complex bit of slow burn that comes by its expected horrors organically, yet horrors they are, and worth it for both genre fans and those who enjoy a great character study.

Simi (Nina Katlein) is a plus-sized teenager torn between her desire to lose weight and a growing sense of self-acceptance. She hopes that a visit to her aunt Claudia (Pia Hierzegger) at her remote country house for Easter holiday can help. Her aunt is a popular nutritionist and author and Simi hopes to find the motivation she needs.

Upon arriving, though, she finds herself caught in a hostile family dynamic, wherein she must deal with hostility from her cousin Filipps (Alexander Sladek) and fat-shaming from Claudia's boyfriend Stefan (Michael Pink), who takes her under his wing in an increasingly disturbing manner.

Her aunt Claudia offers to help her. What initially appears to be a kind gesture is actually an initiation into something bigger, something that will force Simi to take true control over her life.

Critics might be tempted to call Nina Katlein's performance brave, as if her performance as Simi is first and foremost about facing a public who might have opinions about her weight. Better descriptors might include notes such as insightful, empathetic, and multi-layered.

In Katlein's hands, Simi is a fully-realized person who grows and develops, discovering her own agency. Katlein is supported by a cast headed by Pia Hierzegger in an equally powerful performance as Claudia, whose own motives for helping Simi become more clear as the film progresses.

The film takes place in the lead-up to Easter weekend. But rather than fall into sloppy discourse about something as complex as religious faith, Hengl uses the metaphors loosely. Rabbits are hunted. Family is gathered.

Dark ceremony, sacrifice and unholy attempts at resurrection become the backdrop for a story that pits Simi's journey toward self-acceptance against Claudia's perfectionist intensity that threatens to swallow everyone whole. I'd figured out where Family Dinner was going before it got there. But it hardly mattered.

The film is well written, especially well-directed, and perfectly cast. The building dread that finally overtakes the narrative erupts into expected violence. Even as Simi faces it down, however, I can't help but think Claudia, for all her mania, has left the teenager with a powerful talisman against the critic that eats the soul.

There is a question implicit here. With what can we ever hope to fill our emptiness? Food? Family? Family Dinner suggests such answers come from within. I'll say no more except to heartily recommend Family Dinner to anyone hungry for smart, empathy-driven horror.

The film enjoyed its world premiere at the Tribeca Festival.

Do you feel this content is inappropriate or infringes upon your rights? Click here to report it, or see our DMCA policy.
Ant TimpsonAustriaMichael PinkNina KatleinPeter HenglPia HierzeggerXYZ Films