Now Streaming: THE PLATFORM, Nightmare in a Hole

Director Galder Gaztelu-Urrutia's film, now on Netflix, offers an acute understanding of what it is like to have and have not. 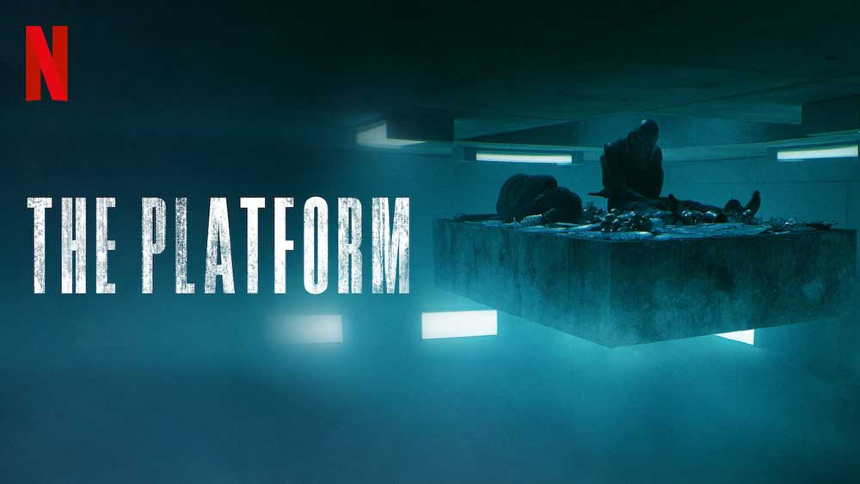 A man wakes up in a spartan concrete room, with a copy of Don Quixote, and a composed, elderly roommate. The number 48 is stencilled on the wall, and there is an open elevator shaft that divides the space. The hole seems to go on forever. This is "The Pit", the latest prison-as-social-experiment, in Galder Gaztelu-Urrutia's The Platform.

The "Vertical Self-Management Centre" is a thing to behold, a gigantic prison consisting of hundreds of floors, each a cell holding two prisoners, which is stacked with a vertigo inducing hole in the centre from top to bottom. Each day, a floating platform containing an opulent, nay decadent, feast descends floor by floor where the inmates have a few minutes to gorge on what they can before it floats down to the next one. People, being what they are, have taken everything - they've also spit, pissed and shat - long before the stage reaches the bottom. Those unlucky inmates tend to eat each other. (This is the "Self-Management" part.)

It being a prison, and moreso, a science-fiction nightmare, there are rules. The delight in movies like The Platform is the discovery of those rules, and ways our hero is going to find a way to circumvent, violate such rules, or break the system all together. I will talk about one though: Every inmate is allowed to bring one personal item. It can be anything. Most bring weapons. Our protagonist brings a fat book about a knight obsessed with the loss of the art of chivalry in the world. He is chastised at one point, "This is not a great place for books." This could be the motto for most barbaric socio-political structures.

The world-building (out of a single set, and a rogues gallery of character actors) here is an impressive use of resources, the screenplay does the heavy-lifting in terms of social satire and problem solving. The practical effects team lay out a spread of violence that is as aggressively mean, as the chefs up top are fussy and precise. The snappy musical score is a percussion of rattles, not unlike an empty cup across prison bars, punctuated with angry, diegetic klaxons.

The inmates are periodically, randomly, shuffled between floors the logistics and bureaucracy of doing so must be unholy and is never seen). This offers an acute understanding of what it is like to have and have not. One character puts it both delicately, "Hunger unmasks the madman in us all." Another less so, "I cannot shit upwards."

I cannot help but think of the clever Canadian film with a similar conceit, Vincenzo Natali's cult classic, Cube, which also did the maximum possible filmmaking with a single reconfigurable set. However, there is another piece of Canadian cinema that offers a real visual touch-point, Denis Villeneuve's sumptuous ecological parable, Next Floor. One of the great, underseen, short films of this country, the story and the metaphors pliable and universal, I was pleased to see this team of filmmakers from the Basque region of Spain expand their strikingly similar concept out to feature length and be worthy of it.

Review originally published during the Toronto International Film Festival in September 2019. The film is now streaming on Netflix.

Do you feel this content is inappropriate or infringes upon your rights? Click here to report it, or see our DMCA policy.
Antonia San JuanGalder Gaztelu-UrrutiaIvan MassaguéNetflixSpainZorion Eguileor