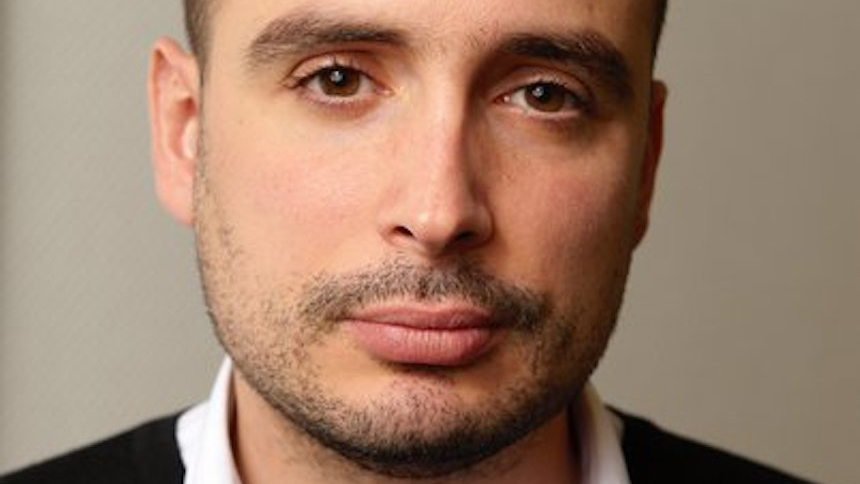 “I do wonder sometimes if you are perpetuating an archetype of epicurean toxicity with all this culinary hysteria.”

That arch line of dialogue can, and perhaps should, act as a litmus test on where you might, or might not, find a way into Peter Strickland's gonzo gastrointestinal satire Flux Gourmet.

The film continues to see its writer-director fearlessly plunge into esoteric subcultures and to document the wacky workspaces that inevitably result. Each of his films, from Berberian Sound Studio to The Duke of Burgundy to In Fabric, gets a bit more 'out there,' but paradoxically still maintains a broad universality and comments on people's fears and foibles.

And yet, to say that Flux Gourmet is his weirdest film yet, is somehow, still an understatement. Here, wealthy patrons of the arts give money, residency and creative spaces to ‘Sonic Caterer Collectives,’ musical and performance acts explore the sociopolitical subtext of domestic kitchen labour, and the distorted noises of food preparation. In the creative tug of war, bad behaviour ensues.

I was recently given the opportunity to sit down with Peter Strickland for a brief, virtual, discussion about the unusual sounds, and sights, contained therein. The below interview has been lightly edited for clarity and flow.

Kurt Halfyard: FLUX GOURMET exists, in my mind anyway, somewhere on the continuum between SPINAL TAP and SWEET MOVIE. It is kind of a world where this Sonic Catering is a major genre of theatre and entertainment. Where did the kernel of the idea come from, and how did it evolve into FLUX GOURMET?
Peter Strickland: It’s interesting that you mention Sweet Movie, because I have never seen that. Isn’t that the one that has Viennese Actionists guesting in it? It’s Dušan Makavejev, isn’t it?   Absolutely, it is the one with at lot of scatology in it.
I should see it, I really should. But I am aware of the Actionists, and I have seen some of those films. Which are a bit too hardcore for me, killing animals and so on, but I guess that whole, niche, where you are breaking taboos all the time, and looking at shock value, I wanted to explore that, when they come across Makis Papadimitriou’s character [Stones], who they feel they can hijack his problems to continue their quest for taboo breaking and so on.
Something really connected with me that we haven’t seen representation of stomach issues before, when it is so common. Part of it is something very serious, we need to look at that, hopefully with some kind of dignity. But looking at taboo and what it means, is it a creative cul-de-sac, it can become a macho one-upmanship. But when taboo is something that liberates people to talk about things such as extreme discomfort in the stomach, or sexual pleasure, that is quite a healthy thing.
There is a lot of music that I was listening to that deals with this subject matter, I mean shock value. Bands like Throbbing Gristle and Whitehouse.
There is the correlation between gastrointestinal distress and noise.
Not just in terms of the obvious connection, but in terms of allowing you to release wind without being heard. Stone’s job is to be invisible, being the the equivalent of an electronic press kit person, and he dealing with bands who deal with noise. It is the perfect place for him to hide.
I was interested in noise as a means to hide, but also as catharsis, for me as a listener, I am still trying to verbalize it, but why extreme noise somehow purges me. People like Merzbow or Swans or even some of the early Suicide stuff, it is in the film as well, one of the characters talks about this, in their own different ways the characters are all looking for catharsis.
I feel every one of your films from BERBERIAN SOUND STUDIO onward, have this sort of feminine witchcraft going on. That opening overhead shot of a woman’s long fingernails dropping meat into a sizzling pan really solidified that thought for me. Could you comment on that?
There is an element of a spell opening the film. An incantation. That was very much on purpose. Whether I succeed or not is on thing, but I do try to make films like a spell.
It sounds very pretentious to say it like that, but yea, the films I love are like spells. It’s easier for you to say that for me to say.
The other aspect of your cinema that lures me in, is this workplace observation, that droll sense of voyeurism of ego, and bad behaviour. I have always been curious how you find a way to balance this with the performances and the editing.
I am glad you said that. Especially Berberian [Sound Studio]. I did very much see that as a workplace drama, so much of it was about bullying and the abuse and putting people down. Which you see so much when you work in offices. I am very interested in the human ego.
Having one myself as a director, it is something you have to deal with. You have to harness it and tame it somehow.
This film is acknowledging the dangers of the ego when it is let off the leash. In this film, how I tried to conduct these things is to not show which side I am on. The easy thing would be for me to take the artists side, but it is much more interesting to not take sides, and not now where I stand, and be like a referee, and you see most of the characters behaving well, but also very badly. I try to put myself in the financiers position, they are just doing their job, and I can imagine what it is like for her [Gwendoline Christie's] character, and having to deal with these awful people who do not take rejection well.
There is an eagerness of Gwendoline Christie’s Patron character, who runs the institute, to engage with the process of her residents. And the wall that gets put up by the collective. The war over the use of a flanger.

The whole thing is just ridiculous, because the flanger is just a Macguffin. What her character is suggesting to turn it down a bit, and Fatma’s character [Elle di Elle] didn’t even know what it was until it was brought up. Clearly, it is not about the flanger at all, it is about their egos. And both of them are guilty, you know the element where some financiers just want to put their stamp on something.
It takes a brave financier to not have notes. To just let the artists be. But conversely Elle Di Elle is being stubborn for the sake of being stubborn. It takes a lot, as someone who makes films, to say to financiers, “that’s a great idea, I am going to use it” and financiers have had great ideas. They’ve certainly have had very bad ideas, that is for sure.
With the casting of Makis Papadimitriou and Ariane Labeb, there is a connection to the Greek Weird cinema movement from a few years ago, they are in the films Yorgos Lanthimos and Athina Rachel Tsangari. FLUX GOURMET feels a bit adjacent to that space. Are you a fan?

Makis I had seen two Greek films he has been in, Chevalier, which I really loved, and Suntan. So this was really the person I wanted to ask to be in this film.
Ariane, I had seen her in stuff, but it was more social. She’s a friend.
The Greek thing, yea, it is because I am half-Greek. That is the honesty of it. Especially the voiceover here, it had to be in Greek. The connection for me, it is going to get too personal now, there is some guilt there that I had forgotten my Greek. With Britain going through Brexit now, I am really feeling the fallout from that.
I think I have always gone for European actors, but even moreso now, I have done it with a vengeance. Especially with accents.
So many actors I know, I don’t want to get into it too much because this is her story, not mine, but with Fatma, she is part Romanian, part Sudanese, part Hungarian, she is never quite at home anywhere. She is told she cannot play English because she doesn’t sound English.
That is too bad, because she has a real gift for your particular fussy diction.
*Laughs*   I got so lucky and am so glad I met her. I met her in this tiny theatre in the middle of Transylvania for my first film. She had very small part in that. I worked with her on the second film because I really liked working with her. And bit by bit, every time she blows my mind, she is so brave and fearless.
I would love to work with her again and again!
I would be remiss if I didn’t ask about Gwendoline Christie’s [flamboyant] wardrobe, and millinery in the film.
Yea, that was Giles Deacon who did the costumes, and Stephen Jones who did the hats. I didn’t know the milliner term until a few years ago, I am bad with outfits. That was very much them. I didn’t have much of a part in it. I would give some simple instructions, but other than that it was collaboration between Giles, Deacon and Gwendoline.
We were talking about the films of [George] Franju or films like Daughters of Darkness. The idea was to have this very flamboyant character, especially as her name is not particularly so. It is quite regular name, Jan, in Britain, and you would expect someone in her position and her look, to have a very exotic, double-barrelled surname or whatever. Deacon and Jones and Gwendoline came up with the look.
It is almost like there is a kind of "mime burlesque" thing going on.
It is funny you should say mime, because the trips to the shops [A recurring set of scenes in the film] came from watching a lot of Marcel Marceau videos.  And Gwendoline’s “French.” In Britain we have this, obsession with using French words to trying to sound sophisticated which always comes out badly.
And the whole food thing, shekels coming up with all these food terms in French, which half of them, I don’t even know. I think I did a Google on “posh French food.” Especially now in this Post-Brexit world, but that is a whole other can of worms.

Thanks again for your time today, for me personally, it has always been such a treat to watch your films with live audiences, typically at festivals, because you never know what each person is bringing to the table, when they will find the humour, or keep up with some element or rhythm of each film. They are all so specific, and esoteric, in and of themselves.
Thank you. Thank you. I saw Flux twice with an audience, but under pandemic restrictions, so I couldn’t really gauge it. I hope to see what happens and the film arrives.
Flux Gourmet will release in theaters and on digital/VOD on June 24.
Tweet Post Submit