Ann Hui’s devastating 1982 portrait of postwar Vietnam and its refugees is despairingly relevant, even timely, in 2022. 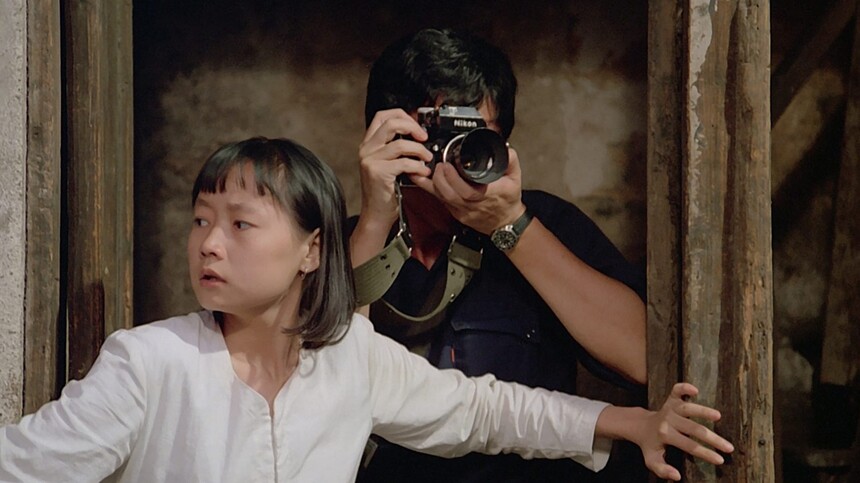 I'd only seen one of Hong Kong filmmaker Ann Hui's films prior to now, her quietly affecting 2011 melodrama, A Simple Life. Now I've jumped backwards in her career nearly 30 years, to an early work which has reclaimed its slot as a foundational piece of the Hong Kong New Wave. Following a digital-first run on the Criterion Channel and some theatrical re-releases, Boat People joins the Criterion Collection in the physical media realm this week, at spine #1113.

Opening with an arresting sequence of a photographer darting in and out of a crowd of Vietnamese watching the Viet Cong parade down the streets of Da Nang in 1975, the film then jumps immediately forward three years to show the same photographer's return trip to the nation. He's a Japanese journalist named Akutagawa (George Lam), on assignment to document the new Vietnam in all its communist splendour.

Akutagawa quickly realizes he is being shown a carefully-manicured facade -- singing children; smiling faces -- and starts negotiating with his minders for more opportunities to explore Da Nang on his own recognizance. Remarkably, they agree, and in his unfettered perambulations, Akutagawa photographs, and becomes captivated by, a 14-year-old girl. (Not that way -- he's horrified by even the suggestion of impropriety.)

This is Cam Nuong (Season Ma), and it is through her and her family (two younger brothers, and a mother who is a sex worker) that we, and Akutagawa, are able to peer beneath the veneer of Vietnam and its New Economic Zones, to witness the horror beneath.

In a lot of ways, Akutagawa is merely a cipher, an ambulatory point-of-view camera who draws us into Cam Nuong's tale and lets us witness it. Justin Chang's excellent jacket essay, "Persistence of Vision," draws attention to this stylistic technique by Hui, who interposits Akutagawa as a "neutral" presence as part of a larger critical approach to the layers of truth and deception in her story.

As the film progresses, Akutagawa's increasing sense of horror at the unseen desperation of the Vietnamese he is becoming close to drives him to greater and greater acts of intervention. The only solution is getting them out of the country -- hundreds of thousands of Vietnamese fled the nation in boats during the period -- and Akutagawa tries to work his neutral status to intervene on behalf of his friends.

Season Ma's performance as Cam Nuong is the heart of the film, however; never cloying or precious, but always with a keen sense of a lived reality and an ancient-feeling pragmatism that quickly dismisses Akutagawa's moral panic. She loots freshly-executed bodies and begins the process of following her mother into sex work; yet in the film's lightest (and most iconic) sequence, she can be photographed in the rain by Akutagawa, at one with her situation and her surroundings.

Director Hui does not hold back on the violence of Cam Nuong's world, however. Her style is documentarian only to a point, after which heightened, stylized bursts of trauma shatter the narrative and recontextualize everything in the preceding story. This is a bloody, disturbing film, appropriate to its subject matter; some of the characters are conscripted to clear minefields with disastrous results, and a late-film flight for freedom is interrupted by a death so ghastly that it may well sit with the viewer forever.

Boat People was caught in an international-relations stir when it came to the Cannes film festival in 1982; the French government, not wanting to disturb their relationship with post-colonial, postwar Vietnam, had the film pulled from competition. It played as a special screening instead, and the attendant press conference is recorded and provided on the Criterion Blu-ray as a special feature. (I hope your French is good; there aren't subtitles, though most French questions are translated on-site.)

Also available is a new interview with Hui and her assistant director, Stanley Kwan, who went on to become a major director in his own right. An additional film by Hui is presented as well: her 1997 self-portrait documentary, dealing with the handover of Hong Kong, As Time Goes By.