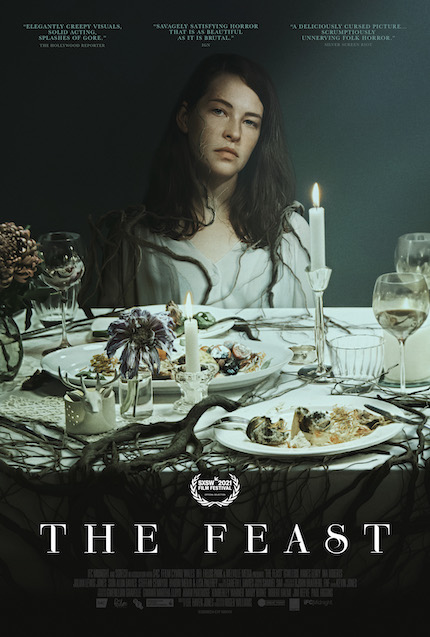 The family of a politician are preparing an opulent meal for family and close friends, never once suspecting that it may be their last. When an odd-duck, last minute replacement for their usual help arrives to assist in the staging of the event, the family's quirks and foibles begin to amplify to the point of climax, and their perfect home just may become a monument to their iniquity.

Matriarch, Glenda (Nia Roberts), has been tasked with preparing both the family home and the family itself for an important dinner with neighbors. However, with her responsibilities as hostess becoming overwhelming, she employs the help of Cadi (Annes Elwy), a somewhat shy, retiring woman who has replaced her usual domestic help to get the job done. While Glenda waits for her husband and guests to arrive, she must organize her sons, aspiring triathlonist Gweirydd (Sion Alun Davies), and brooding rock-star wannabe Guto (Steffan Cennydd) to look decent and make a good impression.

The first half of The Feast takes great care to set the proverbial table for the madness to come, largely through clever juxtaposition of setting and character. The family estate is immaculate and aspirational, each and every white wall is pristine, several external walls are floor to ceiling glass, as if to say to the world, “look how perfect we are in here,” but the rot from the inside is unavoidable. The sons are insufferable as only men born with silver spoons in their mouths can be, supporting Gweirydd's sporting hopes seems to be more of an attempt to divert him from more salacious obsessions, and Guto's aloofness is just annoying in a way that only attention starved teenagers can make sexy.

All the while, these generally unlikable aristocrats are being silently studied by Cadi, about whom we know little apart from the general sense that she's more than she seems.

When Glenda's husband Gwyn (Julian Lewis Jones) arrives home, he becomes more of a hindrance than a help, immediately pouring himself several rounds of scotch and silently cruising Cadi on his way to get dressed. Cadi, however, manages her own minor adventures with both of the boys, learning more about them and their peccadilloes while observing the house and helping to prepare the dinner to come.

For a large segment of The Feast, it seems to be little more than a quietly observed upstairs-downstairs drama examining the dichotomy between the haves and the help. However, things start to get strange when family friend and financial adviser Euros (Rhodri Meilir) shows up and the real reason for the evening's fete becomes more clear. Upon his arrival Euros promptly drops a bottle of what we presume to be a very expensive bottle of wine, which Cadi is tasked with cleaning up, however, when she finds a particularly angry looking shard and scoots it up her skirt, it becomes very clear that shit is about to get real.

From this point through the end of the film, The Feast rapidly descends into violent madness and vitriolic revenge. The history of the estate becomes more clear, and the way the family rose from humble farmers to aristocracy through the manipulation and symbolic rape of the pristine countryside starts to add up, and suddenly Cadi becomes more than just the help, and things begin to find focus.

It's a challenge to say as much as I want to say about The Feast without giving away some of its more illuminating secrets, but suffice it to say that the film straddles the line between folk horror and rape revenge with impressive agility. Think the first half of Martyrs in terms of tone, with an ecstatic violent catharsis that stretches out over the final twenty minutes of the film that just feels right.

With sets so angular you could get cut just by looking at them, and surrounding landscapes so lush it'd be no surprise to see Julie Andrews traipsing across them singing their praises, The Feast is an expertly mounted study in dichotomy. Filmed in the Welsh language, the film explores a culture that feels all too familiar to those in the throes of oligarchy around the world, but just foreign enough for English speaking audiences to remain a bit exotic.

Haven's direction and the sumptuous cinematography from TV veteran Bjørn Ståle Bratberg set the audience at ease by caressing every last inch of the estate and the ensuing carnage with the camera. Writer/producer Roger Williams' story reveals exactly what it needs to at every moment, always giving the audience an opportunity to connect the many expertly placed dots throughout the film until the finale where it all finally makes sense.

Among the smartest, most literate, and goriest of SXSW's Midnighters this year, The Feast is hands down the best of the section. A film that will amply reward repeated viewings, The Feast is a folk horror fan's dream come true.

Review originally published during SXSW in March 2021. The film will open in theaters and Digital / VOD platforms November 19, 2021, via IFC Midnight. Visit the official site for more information.

Do you feel this content is inappropriate or infringes upon your rights? Click here to report it, or see our DMCA policy.
Annes ElwyIFC MidnightJulian Lewis JonesLee Haven JonesNia RobertsUKWalesWelsh