Kristen Stewart stars in yet another major film from director Pablo Larrain, a modern master in cinema. Do not miss seeing the film on the big screen. 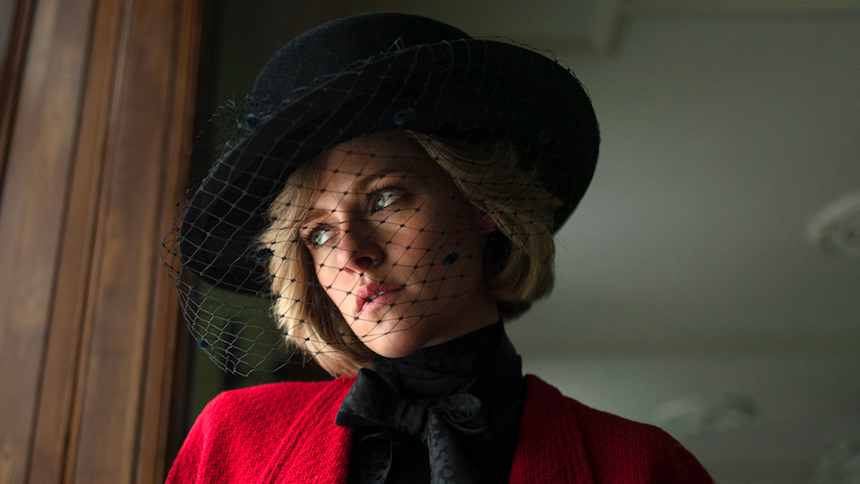 Pablo Larrain is no stranger in creating unusual, yet incisive film versions of lives of famous historical figures (Neruda, Jackie). In Spencer, he approaches Diana, Princess of Wales, smartly and intimately with the help of Kristen Stewart. The result is a fleeting portrait of the inner life of a much exposed and examined tragic figure.

Unlike conventional biopics with long stretches of a subject's lifespan, Larrain frames Spencer within a period of three days (during a Christmas retreat) of Diana's life, in the midst of her failing marriage with Prince Charles, in her 30s with two growing young boys. The opening title states: "A fable from a true tragedy," effectively swatting away any possible criticisms of historical inaccuracies it might contain.

It's a fable indeed. Spencer is about a trapped young woman, forcibly bound by stifling tradition of the highest order and subjected to nearly hysterical media attention. The film takes a gentler look at her, trying to find any momentary escape with the help of kind onlookers.

Even decades after her untimely, violent death, Princess Di still has a hold on the public's fascination: the fairytale story of a young woman, a commoner, swept off her feet by a literal prince who is next in line to the British throne. There were countless portrayals of her on big and small screens over the years, most recently seen in the successful TV show The Crown, played by young ingénue, Emma Corrin, who captured the bewilderment and naiveté in the early stages of the royal matrimony.

So how does Larrain, one of the most exciting talents in modern cinema, who is skilled at tinkering with the film medium both in form and in content, interpret the life of the princess? And what does the great Kristen Stewart offer in this well-worn subject?

Diana is first seen driving in her sports car in designer clothes and tinted glasses. She is lost on her way to The Sandringham House, Queen Elizabeth II's retreat home in Norfolk, even though Di was born and raised near there. Things have changed around here quite a bit, she muses later on. Arriving last, Diana's confronted by Major Alistair (Timothy Spall), a stern army man specially recruited to keep an eye on her, serving as a headmaster of the house for the duration. He keeps reminding her that it's the tradition and the oath to the betterment of the country that are the most important aspects for a public figure to keep.

The large house with grand hallways and opulent decor is figuratively and literally cold and unwelcoming. The British Royal Family is a tight pack that Di and her little cubs don't belong to. Suffering from bulimia, she is constantly late to dinners, forgets what clothes to wear on what occasions, can't open the curtains because of paparazzi, and can't visit her childhood home, which is just a stone's throw away.

Someone left a book on Queen Anne Boleyn, who was beheaded for allegedly having an affair by Henry VIII, on Di's bed. Is this a warning of some kind, to make her behave or to leave before it's too late? Anne herself appears from time to time to warn her the same fate that is waiting for her.

Along with her trusty children, Maggie (Sally Hawkins), a childhood friend of Di, now her dresser,  and Darren (Sean Harris), the head of the cooks, are the only few friendly faces in that house. Like everyone in the British public at the time, they fell in love with a sweet, young princess. They can't bear the thought of their beloved Di crumbling in front of their eyes. They want very much to see her survive those three days. It turns out, Alistair also has a soft spot for her and wants to grant her moments of freedom, like letting a canary out of its cage for a while.

Di finds her escape in small things. She rebels in changing her clothes while the curtains are open, sneaking out at night for a walk, intentionally getting lost, wearing the wrong dress in the morning mass, eating pastries in the middle of the night in the kitchen, and so forth.

Spencer paints a picture of Diana when she has given up on the idea of personal happiness, as a trapped woman and a mother of two. There is no future, and past is present.

French cinematographer Claire Marthon (Portrait of a Lady on Fire, Atlantics, Stranger by the Lake) keeps tight focus on Di (Kristen Stewart) the whole time. We don't get to see anyone in focus for a long time. Only later on do we get to glimpse Charles (Jack Farthing) and the Queen (Stella Gonet) and the like. The power is in close-ups. Stewart's gaunt, anguished face and fluttering eyelashes sell the film.

Jonny Greenwood's score adds another layer for the film. I find his work distracting in some other films, but in Spencer it works seamlessly. His mix of classic strings and jazzy bass keeps the film flowing forward.

Stewart, who continues to choose interesting and diverse roles, digs deep into her role of a very famous tragic figure. Her physical vulnerability and beauty, coupled with her youthful defiance and a sliver of smile she flashes while breaking the rules, embodies the princess and her humanity in her darkest hours.

Hawkins, an actress who brings warmth in any role she plays with her smile, is perfect for the role of Maggie, one of Di's few confidants, who sympathizes with her old friend. Maggie's declaration of love on the beach is perhaps the most joyous, heartwarming part of the film.

But the showstopper of Spencer belongs to a sequence where Di runs on the grounds of the Sandringham House, decked in countless designer clothes, running from screen left to right: Larrain captures the essence of Diana Spencer in that instance, a commoner princess, trying to outrun all the rigid traditions and a failing loveless marriage, and be free, all the while being a fashion icon in a fitting 80s music video aesthetic.

The 80s hit song "All I Need Is a Miracle" blasting in the car stereo, Di and her cubs escape the three days of hell, however short the reprieve that must've been in real life.

Larrain, a good tactician he is, knows how to go about tackling a subject who is so well known and overly exposed. Like in Jackie, it's all about contrasts and in all the small things. A trapped woman, like Jackie O in the room full of dark suited men after the assassination of her husband, her bruised leg, trying on various clothes. Casting has to be right. Portman was perfect for that measured, educated woman from a well to do upbringing. In Spencer, thanks to Stewart, there's a sense of abandon; sweet yet scarred with the hint of rebellion still left in her. Larrain understands exactly what more can be said about in these world famous tragic women. It's their humanity.

On the heels of his great, energetic dance film, Ema, which was released last year, Spencer is yet another major film from Larrain, a modern master in cinema. And his illustrious, diverse cinematic expansion continues. Do not miss seeing the film on the big screen.

Spencer opens in theaters nationwide on November 5 via Neon.