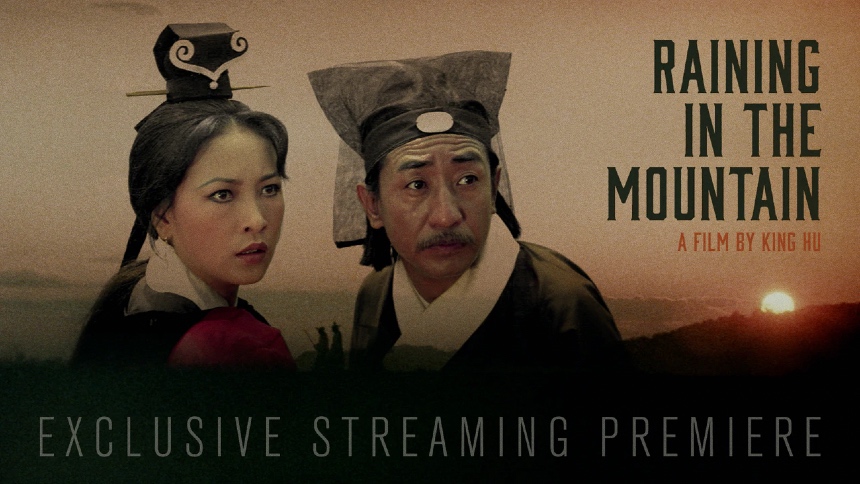 The exclusive streaming premiere shines another light on the great King Hu.

Known especially for his classics Come Drink With Me (1966), Dragon Inn (1967) and A Touch of Zen (1971), King Hu made this film during a period ripe with pictures that bore evidence of his stylistic influence.

It features a lot of walking, and a lot of running, though not much action per se. The action that is featured, however, is "cherce," to borrow a phrase from Spencer Tracy in Pat and Mike (1952). Even more so, it makes clear that an action film does not need to be swamped in nothing but action to be an effective action film. Perhaps because I had conditioned myself to expect an "action film" from the director, I realized I was relying too heavily upon my own expectations.

Like many, many films from the 1970s, Raining in the Mountain moves at a deliberate pace that may appear to be 'too slow' for a viewer soaked in modern-day blitzkrieg action flicks, including myself. Yet once I adjusted my expectations, I was drawn into a world far removed from the modern day, and wishing that I could have seen the film on a much bigger screen.

An aristocratic esquire -- a wealthy, widely respected landowner -- travels to a mountainside Buddhist monastery in the company of two people, who he represents as his concubine and his personal assistant. He has been asked to come and advise the aging Abbot on the selection of his replacement. In reality, however, the esquire is only interested in obtaining a sacred scroll that is held in the temple, and the concubine and his personal assistant are, in reality, thieves he has hired to steal the holy document.

Adding to the skullduggery that is afoot, a military General and his lieutenant have also arrived to "assist" the Abbot, though they are likewise in search of the mysterious scroll. To further complicate matters for the would-be thieves, a fresh convict arrives to become a Buddhist and throws off everyone's plans.

The plot lines are laid out clearly, flowing and crossing each other, sometimes intentionally, and sometimes not (apparently). It's a rich brew that is easy and enjoyable to watch, showcasing lovely pageantry, costumes, and more Buddhist teachings than I would have anticipated.

I've seen the King Hu titles listed above, as well as Legend of the Mountain, released just a few months later, and Raining in the Mountain reveals another facet in the director's sumptuous filmography.

Raining in the Mountain

More about A Touch Of Zen