From here to A TOUCH OF ZEN, Criterion is filling out King Hu's filmography nicely. 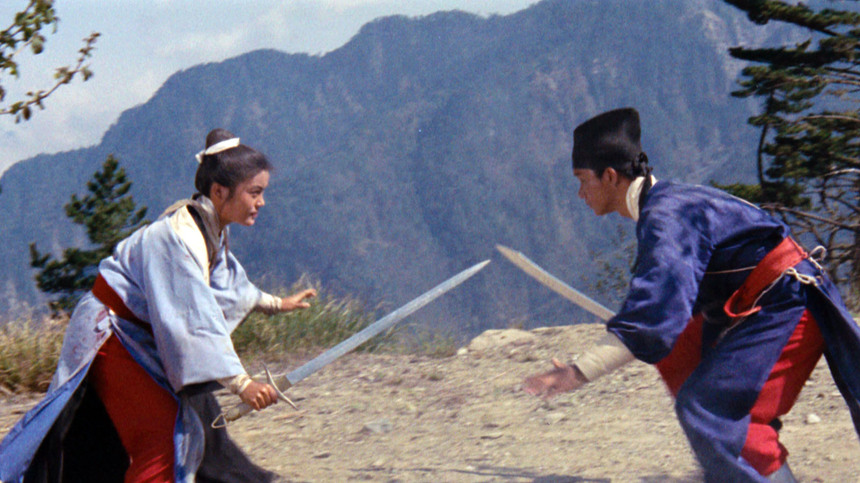 Many of us approach our pop culture backwards, in a phenomenon we might well call the Simpsons effect: pop culture recycles and references older pop culture faster than we can fill in our experiences of the originals. (If you, like me, first saw a chestburster in Spaceballs, not Alien, you know what I'm talking about.)

Along those lines, many TIFFs ago, I was watching Tsai Ming-Liang's Goodbye, Dragon Inn, in which the eponymous King Hu martial arts film plays for the last time at a gloomy old movie theatre that is about to close. In Goodbye, Dragon Inn, we watch the audience watch Dragon Inn; watch the theatre staff clean the theatre after the last ringing blade has echoed off the screen. We don't watch the film, though we do hear a lot of it. As a piece of filmmaking, Goodbye, Dragon Inn was excruciating. But it put Hu's original film on the list of things I'd better get around to seeing someday.

Made in 1967, Hu's wuxia thriller hits the Criterion Collection this week at spine #937. The film has been restored in 4K. Colour in the outdoor scenes is stunning: the scorched electric blues of the sky against the mountains, or the loamy greens of forest streams, pop our quartet of martial heroes out of the movie like a gang of superheroes.

These heroes -- knights-errant all, conscripted to rebel against a corrupt government by nothing more tangible than it being the right thing to do -- have converged upon Dragon Inn, a forlorn outpost on the northern Chinese border. They fight to protect the family of a slain government official, who are being pursued by conniving eunuchs (!).

The result is a series of cleverly conceived, beautifully staged action sequences (in a time before "action choreography" was a named profession in the making of martial arts epics, as New York Asian Film Festival co-founder Grady Hendrix reminds us in the special features). Hu's blocking for camera is thrillingly precise; each tracking shot rearranges information within the frame as new opponents make their presence known, or details how Hsiao Shao-Tzu (Shih Chun in a sly, confident performance) will outwit them. Blades, arrows, and bodies move quicker than the eye. Off-camera trampolines vault performers skywards in daring, acrobatic escapes.

One nearly-twenty-minute confrontation occurs when Hsiao arrives at the inn, a total stranger, his fealty to the endangered family not yet known. He drinks poison like it's orange juice; swats aside lethal arrows; and all while sitting gaily at a dining table, ordering his dinner.

Shih Chun leaves a great impression as the ostensible lead: his huge, piercing eyes were made for a Cinemascope format, and his sense of wry detachment will go on to inform many mystic warriors of future wuxia (and Star Wars) films to come. Ling-fung Shangkuan, as the (inevitable?) female warrior-in-disguise-as-a-boy of the story, is also great fun, and her swordfight sequence when trying to gain the doorway of the inn, against half a dozen foes, is epic.

Ling-fung gets one of the handful of interviews in the supplements of Criterion's blu-ray, to which she arrives in full martial arts regalia (and explains why, as one of the few women to have earned her rank). She's chatty and a bit dotty, and more than happy to detail her participation in Dragon Inn; I think she and Pam Grier oughta hang out sometime and trade war stories about leading action franchises as women back in the day.

The actor interviews on the disc are short. Grady Hendrix's analysis of the scene where Ling-fung attacks the inn, is a bit longer, running 25 minutes, assessing how Hu layers realism of design and energy of editing to create faster-than-the-eye superheroics for his lead female character. He mentions the strong influence of Japanese martial arts pictures on the Chinese cinema of this era, along with the surprisingly deep impact of Robert Wise's The Sand Pebbles, the Steve McQueen film that was produced in Hong Kong and greatly shaped the local approach to stunts and stunt choreography.

It isn't the strongest disc in Criterion's lineup for special features, but the transfer of the film itself makes Dragon Inn an attractive purchase nonetheless. One more bonus: the pack-in essay, by Andrew Chan, is printed on the back of a fold-out poster.

Do you feel this content is inappropriate or infringes upon your rights? Click here to report it, or see our DMCA policy.
King HuThe Criterion Collection