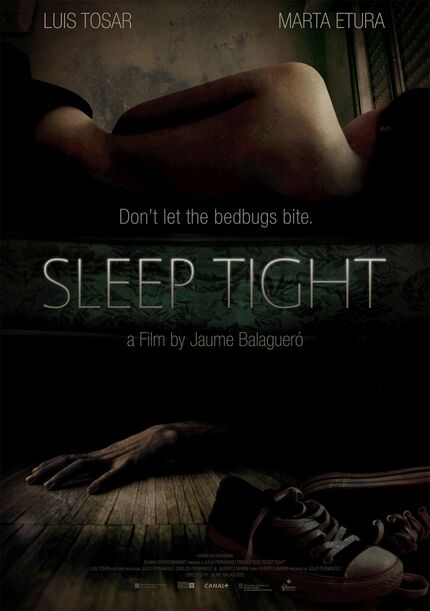 By day, he toils anonymously as a concierge in a very lovely, historic apartment building in the middle of a bustling city. He might as well be invisible; the residents do not even acknowledge his presence when he holds the lobby door open for them. A little girl acts like a brat towards him, unloading a mouthful of milk on the front desk counter for some unfathomable reason.

Perhaps the biggest insult comes from Clara, a beautiful young woman who treats him just like the other residents do, like hired help, even though we saw him get up from her bed that morning!

On his lunch break, Cesar heads off to visit his mother in a hospital. She is an old, old lady, confined to her bed, unable to talk, not even recognizing her son. who patiently speaks to her about his challenging day. When he returns to work, the landlord rags on him for being late (again). Cesar bears all his troubles in quiet desperation. He very much wants to be happy. He tries so hard. But true happiness seems like an unobtainable goal.

Cesar is in terrible agony. Clearly he internalizes his feelings, keeping a placid smile on his face, and maintaining an extremely calm disposition, no matter the price he may be paying emotionally. Anyone who has suffered from bouts of clinical depression can sympathize with Cesar. Maybe it wasn't you, but it was a friend or family member, and you saw the sadness and despair written in their body language, and you empathized, wishing you could make it all go away.

Then we see where Cesar spends the night, and everything changes.

Sleep Tight (AKA Mientras duermes), directed by Jaume Balaguero from an original screenplay by Alberto Marini, quickly erases any possible concern that limiting the action to a single apartment building, a la [REC] and [REC] 2 (both of which Balaguero co-directed with Paco Plaza), might be an attempt to recreate the claustrophobic tension of those horror flicks.

The thing is, Sleep Tight never feels claustrophobic. Much of the action takes place during the daytime, the lobby and apartments are spacious and filled with windows that let in the light, and even at night it never feels like the shadows are what you need to fear. What's really scary is what a certain individual is capable of dreaming up.

The "villain," in this case, is someone who definitely doesn't look to be one, yet hatches plans that are truly diabolical. It's evil on a level that is so deranged, I found myself laughing, not because it struck me as silly or stupid, but because I thought the twists were very clever indeed. With the aid of his fellow craftsmen, Balagueró creates scenes that are the definition of nerve-jangling, not necessarily because of the threat of extreme physical violence -- though that's an always-present concern when you're dealing with a villain this cruel -- but because it's dangling out at the edge of believability.

Perhaps Balagueró crosses the line a time or two. But I savored every suspenseful moment that flew by, literally biting my nails, right up to the dreaded, though somewhat inevitable, time bomb of an ending.

Luis Tosar gives a deceptively quiet and very strong performance as Cesar, while Marta Etura presents a dramatic counterpoint as the optimistic, positive-thinking Clara. The rest of the cast is uniformly strong; young Iris Almeida plays the bratty Ursula, and Petra Martinez is warm and convincing as a friendly older resident. Behind the camera, Pablo Rosso, who also shot the [REC] films, demonstrates his fluid versatility as a cinematographer.

You may not be able to do what the title suggests after you see this movie.

Review originally published during Fantastic Fest in September 2011. The film is now streaming on Shudder.

Do you feel this content is inappropriate or infringes upon your rights? Click here to report it, or see our DMCA policy.
Jaume BalagueroLuis TosarMarta EturaShudderSpain