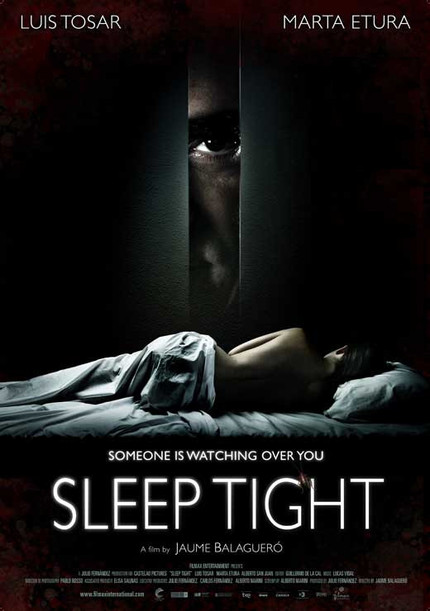 Having launched a worldwide phenomenon as co-director of [REC] and [REC]2, Jaume Balaguero felt the need to cleanse the palette a bit before bringing the franchise to a conclusion with the upcoming [REC]4: Apocalypse. And so he set out to do something entirely different. No high impact kinetic action. No shaky, point of view cameras. Just a creepy as all hell, tightly controlled thriller titled Sleep Tight.

Cesar works as a doorman in a Barcelona apartment building. Happiness eludes him and he feels the need to reaffirm his reasons for living on a daily basis. He goes about his day to day work mainly unnoticed by the residents of the building, but he pays close attention to them. He knows all the intimate details of their lives, everything about them, especially one of them. Clara is a happy-go-lucky young woman, who always looks on the positive side of things. Her cheery attitude to life makes Cesar' skin crawl. He won't be happy until he has wiped that smile of her face once and for all, because Cesar feeds off other people's pain. He delights in the unhappiness and anguish of others and he loves nothing more than to plant the seed of misery and watch it grow. In Clara he has found the perfect target, and he will go to extreme lengths to make her life miserable. But Cesar is starting to get a bit too cocky, and soon his carefully thought out plans will start to unravel... Luckily for him, he has one last ace up his sleeve.

Dark Sky Films release Sleep Tight on US DVD and BluRay January 8th and we've got five copies of the BluRay to give away. You want your shot at it? We're doing this one on Twitter, folks, so here's what you've got to do:

Follow ScreenAnarchy (@ScreenAnarhcy) and send us a tweet naming Balaguero's earlier film that featured True Blood star Anna Paquin along with a #SleepTightGiveaway hashtag. Contest open to residents of the USA. Winners will be selected on the 8th. Check the Spanish trailer for the film below.

Do you feel this content is inappropriate or infringes upon your rights? Click here to report it, or see our DMCA policy.
[rec]giveawayhorrorjaume balagueromientras duermessleep tightspainthriller