Now in Theaters: BETTER DAYS Ahead, Maybe, Even For Murder Suspects 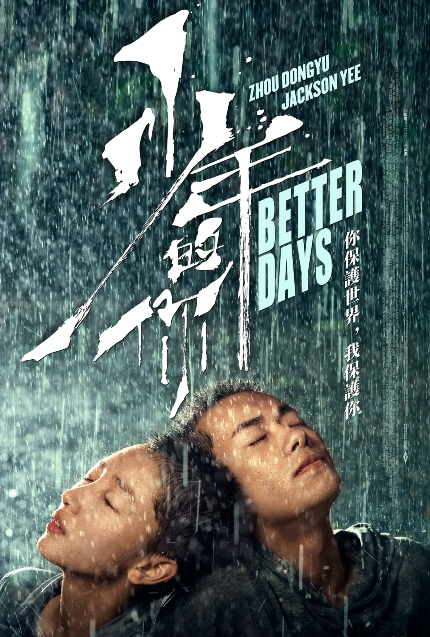 Bleak, oppressive, and dark sounds about right for this weekend.

If you're in the mood for a dramatic picture from China that won't necessarily make you feel better about life in general, this might be your ticket.

Opening today in limited theatrical release, Better Days exposes "the dark world of bullying and societal pressures of achievement facing today's youth," according to the official description." Indeed, the trailer is sober-minded and solemn. Here's the balance of the rather lengthy description:

"When it is time for the Chinese gaokao, a two-day national college entrance exam, the entire country comes to a standstill. For nearly ten million high school students, this exam not only determines where and if they get to study but the fates of their entire families as well.

"Like so many others, Nian has been single-mindedly preparing for the exam, cutting everything else out of her life. When she becomes the target of relentless bullying, fate brings her together with small-time criminal Bei and the two form a strong friendship. Before they can completely retreat into a world of their own, the two are dragged in the middle of a murder case of a teenage girl where they are the prime suspects.

"In this dramatic thriller, Derek Kwok-Cheung Tsang paints a bleak picture of an oppressive society, in the guise of a gripping fairy-tale love story, exposing the dark world of bullying and societal pressures of achievement facing today's youth."

Do you feel this content is inappropriate or infringes upon your rights? Click here to report it, or see our DMCA policy.
ChinaDerek Kwok-Cheung TsangJackson YeeZhou Dongyu