Now Streaming: INTO THE DARK: PILGRIM, Let's All Be Grateful, Or Else 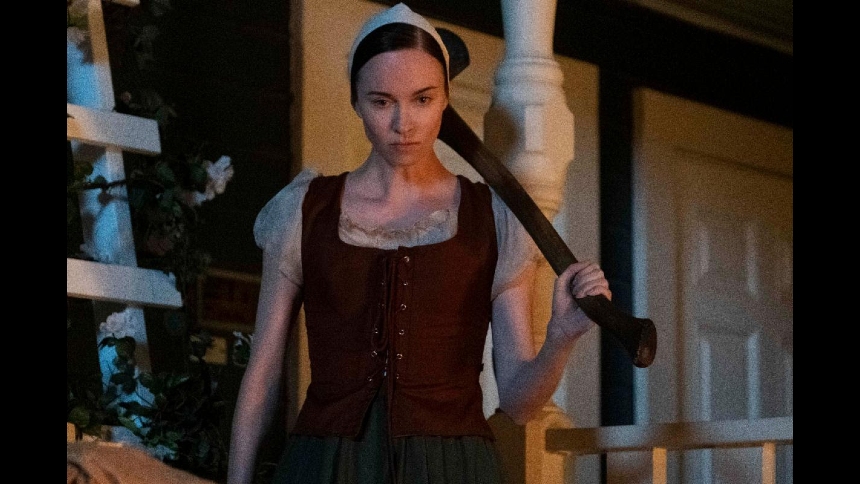 Let's all be grateful to Blumhouse Television Productions and Hulu for the wide buffet of holiday horror they have served during this past year.

Into the Dark: Pilgrim
Now streaming on Hulu.

Eli Roth's Thanksgiving is the best Thanksgiving horror movie never made, setting an impossibly-high bar for all future filmmakers.

The trailer, created for the Rodriguez/Tarantino double-bill Grindhouse (2007), perfectly captured the dark side of the 1970s and simultaneously felt like the most respectful, most hilarious nod ever to that era and to John Carpenter's Halloween. It would be foolhardy for anyone but the unexplainably mad to try to top it.

Instead, Marcus Dunstan and Patrick Melton return to the roots of the holiday, making a film that indubitably remains a product of their twisted imagination.

Based on a story by Noah Feinberg, who is credited for the screenplay, together with Dunstan and Melton, Pilgrim is the latest, feature-length episode of Blumhouse Television Productions' holiday-themed Into the Dark series on the Hulu streaming service. The series has featured a couple of excellent, as well as several very good, individual episodes, which all appealed to me because they were primarily smart, psychological thrillers rather than crass splatter flicks.

The likable Dunstan and Melton have built their careers out of writing crass splatter flicks, dating back to Feast (2005) and its two sequels, plus at least four Saw sequels and Piranha 3DD (2012), which was obviously a joke. They also worked together on The Collector (2009), on which Dunstan made his feature directorial debut, manifesting an ambition to frighten and disturb at a level deeper than a clever, blood-soaked gag.

Pilgrim, then, is recognizably by Dunstan and Melton, crammed with an unholy number of juvenile gags that appeal mostly to those with a juvenile sense of humor. From the first jump scare, however, it's also apparent that this reflects their honest intentions, as though they are saying, 'Yes, we mean for this to appeal to hardcore horror fans, and we mean to pack every moment possible with as much sick humor and terrible consequences as possible, but, y'know, none of this is real, right?'

Indeed, Pilgrim plays like a dark fantasia of a horror sideshow, where nothing is meant to be taken seriously. Reign Edwards stars as Cody, a teenager who is still recovering from the death of her mother. Her father Shane (Kerr Smith) has married Anna (Courtney Henggler), who is eager to gain favor from the disgruntled Cody.

For the Thanksgiving holiday, Anna has hired two Thanksgiving re-enactors to try and bring the family together. Ethan (Peter Giles) and Patience (Elyse Levesque) arrive at the doorstep dressed as pilgrims, resolved not to break character and to share the original meaning of Thanksgiving with the family.

From the get-go, they are a clear and present danger, but Cody is so preoccupied with business, and Anna is so preoccupied with holiday preparations, that only Cody sees that something is amiss with two intense strangers taking over their home. (Cody's young step-brother is also under foot, to minimal distraction.)

Splatter fans will be anticipating the breakout of many, many bloody treats, and that is certainly delivered in abundance. Yet Dunstan's shooting style consistently signals that this is a fractured fable about family with a touch more interest in a disruptive fantasy; again, it's not meant to be taken seriously.

Even though I quickly lost interest in the bloodletting and casual torture, I enjoyed Reign Edwards' fevered interpretation of her character. Nicely breaking from other modern-day realities, it was a relief to see an absence of racism among the antagonists.

Summing up: The evil people in this piece are equal-opportunity villains: they treat everyone horribly, regardless of skin color. 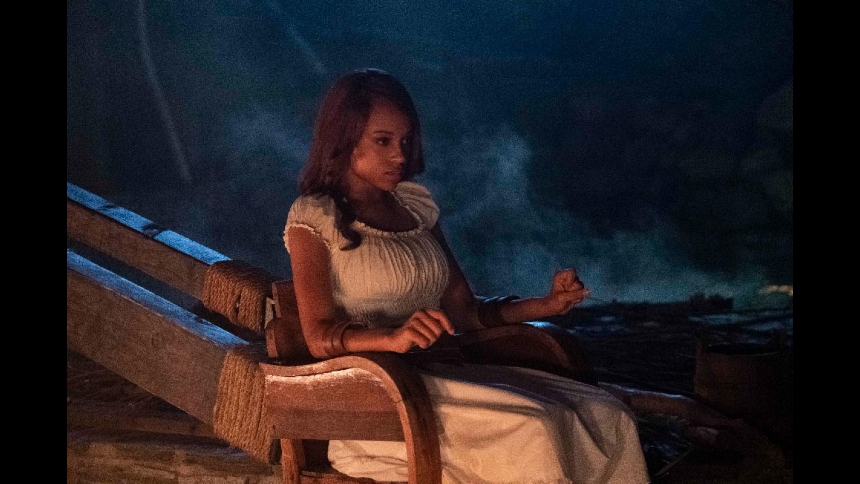 Do you feel this content is inappropriate or infringes upon your rights? Click here to report it, or see our DMCA policy.
BlumhouseHuluInto the DarkMarcus DunstanPatrick MeltonReign Edwardsstreaming