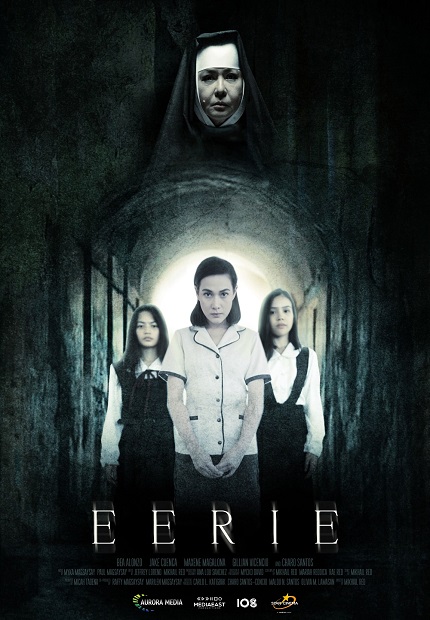 Warning: ghostly hissing and wet squelching will ensue, aka screaming in tongues.

Director Mikhail Red (Birdshot) clearly knows what he is doing.

Each shot is precisely composed, each sequence follows in logical order, and the tone remains contemplative as a young woman recounts in voice-over the ghostly events at a Catholic school for girls in the Philippines. Pat (Bea Alonzo) is a sympathetic guidance counselor who is constantly stymied in her efforts to help the students by the hierarchy at the school, personified by the principal, Mother Alice (Charo Santos-Concio).

Our own Tristan Zinampan, who lives in the Philippines, saw the film after it opened there earlier this year. In his review, he wrote in part: "Storywise, the film delivers commentary on how our institutions and internalized preconceptions can be the barriers preventing us from helping those with mental illness. They may even cause further oppression, regardless of how sincere are the intentions. It's a message that is both timely and gravely needed. However, true to the saying, intent is not enough." He concluded: "The film struggles to express these ideas into an intelligible story. It leans hard into conventions, and instead of subverting or innovating, it is instead constrained by them. ... Eerie feels like more like a defanged foray into the genre."

Having Tristan's review in mind, I watched the film and, about 20 minutes into it, I was ready to violently disagree with him. But then I continued watching, and I came to the same conclusion.

Summing up: Asia film fans who also appreciate 'slow horror' will want to see what Mikhail Red has done next.

How do you love someone who has become a monster?

After a scene from childhood, director Sitisiri Mongkolsiri follows two of the youngsters as they have grown into young adulthood. Sai is a friendly and kind nurse with ambitions in life. She demonstrates the same qualities of leadership that she has seen in her father, the respected leader of their rural village in Thailand. She remains lifelong friends with Jerd, who follows her around like a puppy dog that wants to be a man. And then there is Noi, a childhood friend to both, who finally returns to the village.

But Noi brings bad tidings, along with a group of hunters who have only one prey in mind: a krasue! My colleague James Marsh, who lives in Hong Kong, saw the film in connection with its local theatrical release and explained in his review: "Like the lank-haired spirit of Hideo Nakata's J-horror classic Ring, "krasue" are similarly malevolent female demons, prolific throughout southeast Asian folklore. Manifesting as a floating head that trails its internal organs behind it, krasue are believed to be the restless souls of wronged women. They roam the countryside feeding on babies and livestock, as they search for vengeance and closure."

That sounds pretty good for horror-movie fans! As James points out, however, "the first half really needs to pick up the pace. Things certainly get crazy in the final act, but less committed viewers may have lost interest by the time flying man-sized bat creatures and shotgun-wielding monks make their entrance."

I certainly agree. The atmosphere and mood are well-established, but it requires patience to sit through plot machinations that simply repeat themselves.

Summing up: The ending sequence of this ambitious Thai horror-romance is undoubtedly a treat for horror-movie fans, if you can make it that far.

The first 20 minutes breeze by fairly painlessly, as a girls' volleyball team wins a match and heads off somewhere rural in a van, which breaks down and leaves them exposed to the French version of American hillbillies.

Up to that point, the biggest sign that the self-aware film is intended to be a splatter comedy is translated by a guitar player who appears on screen to sing a bent tune to the camera about all the characters, but one, dying before the end of the movie. And then the splattering begins.

My friend and colleague Eric Ortiz Garcia saw all 77 minutes of the film at Fantastic Fest last year and he was fairly positive, concluding his review by writing:

I am not the right audience for this film, which is why I walked out of the screening at Fantastic Fest last year after about 35 minutes, and I reminded myself that I am still not the right audience when I endured the first 20 minutes of the film again on Netflix, where it debuted this past Friday, before switching it off. For me, the comedy is too broad, dumbed-down, and familiar, and it's delivered by characters who are not likable in the least. The practical splatter effects are clearly labors of love, though, if that's something you enjoy watching.

Summing up: Got splatter if you want it.