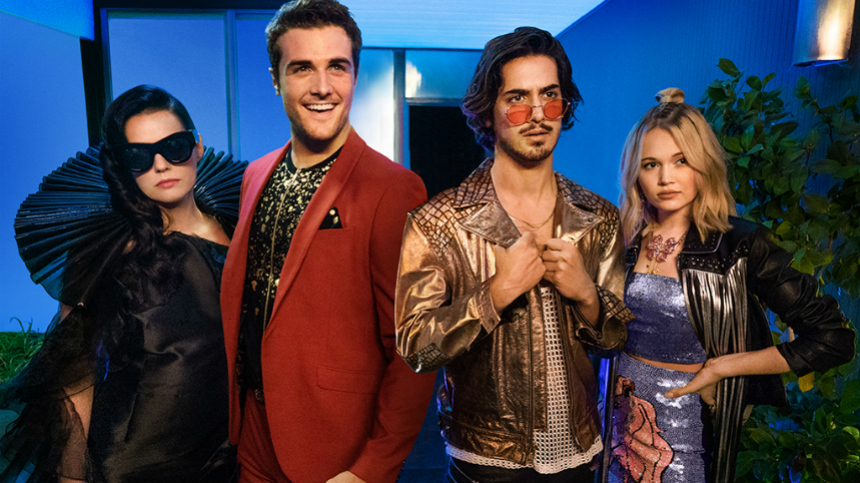 Now Apocalypse
Will premiere on Starz on Sunday, March 10.

Although I haven't seen a single episode yet, Gregg Araki's Now Apocalypse still seems like the best bet for adventurous viewers. Araki has an impressive string of arresting indie features on his resume, stretching back to the late 80s. I started following him after The Doom Generation (1995); his most recent feature to date is White Bird in a Blizzard (2014).

Since then, he's been focused on television, with credits that include The CW's Riverdale and Netflix's 13 Reasons Why. His latest production will debut on the Starz premium network this coming Sunday. The series, consisting of 10 episodes, each about 30 minutes, stars Avan Jogia, Kelli Berglund, Beau Mirchoff and Roxane Mesquida.

The characters are 'restlessly romantic, thoroughly modern, and guileless dreamers,' plus a 'dedicated scientist'; they're all looking for love and sexual satisfaction, presumably. Early critical reactions have been mixed so far, but that's often been the case with Araki's films too.

Summing up: If you're a fan of Gregg Araki's past work, the series sounds like it's worth a free trial on Starz, at minimum.

I saw the trailer, which features historical action and intrigue. It has ... possibilities.

Here's the official synopsis: "Set in the mid 1800's within the colonial period of the Dutch East Indies, the series chronicles the story of a group of unlikely individuals who lead a rebellion against a brutal governor and suddenly find themselves in control of a Dutch garrison town called Grisse. The stories revolve around a number of unique characters, each from diverse backgrounds and creeds who unite for the chance to determine their own destiny from the yoke of tyranny."

It's an HBO Asia production. If you have HBO already, look for Grisse under Series / International / Grisse. (Frankly, I didn't even realize I have legal access to this show until a few minutes ago!) And while you're at it, check out Joko Anwar's series Halfworlds too.

Summing up: Destiny! Tyranny! Diversity! Rebellion! Something different! Those sound like selling points to me, but we all have buttons to push.

Immortals (aka Yasamayanlar)
Will be streaming on Netflix.

Everyone loves Turkey, everyone loves vampires, and (almost) everyone has Netflix, so Immortals (aka Yasamayanlar) is my genre pick of the week.

The official synopsis claims: "Driven by revenge, human-turned-vampire Mia sets out to vanquish Dmitry, a ruthless vampire leader who seeks an artifact that grants immortality." Yes: down with male leaders! Up with female leaders!

Summing up: What looks like an abundance of blood and fangs; much, much action; and not much English. Sounds like a (possible) winner to me.

(Note: Apparently, Netflix has not yet posted an embeddable trailer, not even on YouTube, so visit the official site to watch the trailer.)

Do you feel this content is inappropriate or infringes upon your rights? Click here to report it, or see our DMCA policy.
Gregg ArakiGrisseHBOHBO AsiaImmortalsNetflixNow ApocalypseSingaporeStarzTurkeyYasamayanlar