70s Rewind: THE WILBY CONSPIRACY, Poitier and Caine Go on the Run 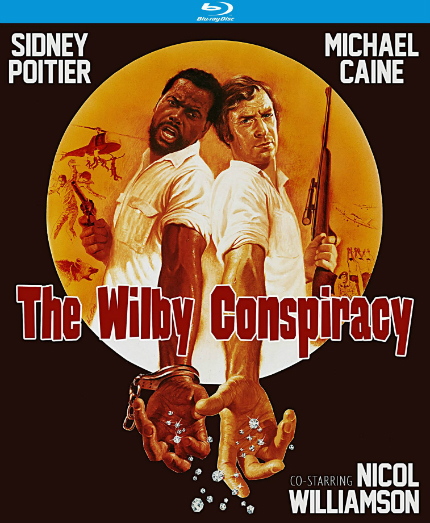 Why so glum, chum?

Cold and inexpressive of any emotion except anger in The Black Windmill (1974), Michael Caine is far more appealing starring opposite Sidney Poitier in The Wilby Conspiracy (1975), a film that passed by me entirely in its year of release. (It's now available on Blu-ray from Kino Lorber.)

Poitier is top-billed as Shack Twala, an anti-apartheid activist who has been imprisoned for 10 years. As the film begins, he is in chains in a court of law, while his lawyer Rina Van Niekerk (Prunella Gee) argues for his release. Meanwhile, engineer Jim Keogh (Caine) sits in the courtroom, bored, waiting for Rina to finish up so they can go to lunch.

It's a quick and easy set-up, and also proves to be typical of the movie as a whole. Ralph Nelson directed; he's best-known for social drama Lilies of the Field (1963), for which Sidney Poitier won an Academy Award. (Nelson and Poitier also worked together on Duel at Diablo (1966).)

So Nelson may seem like an atypical choice to direct a thriller, until remembering (or researching) his experience as a TV director in the 1950s, followed by a nice variety of films that he helmed throughout the 60s and 70s, including Father Goose (1964), Charly (1968), and Embryo (1976), to list only the titles I've seen. Prior to this film, Nelson directed family drama Flight of the Doves (1971) and 1920s adventure-drama The Wrath of God (1972), so perhaps he was ready to do something more relevant.

Briskly told and surging with energy, The Wilby Conspiracy is a rousing action-drama with a timely political edge. Set in South Africa, it's thoroughly enjoyable and only occasionally ludicrous, reflecting a good deal of expert craftsmanship. The film is also bolstered considerably by the presence of Poitier and Caine. 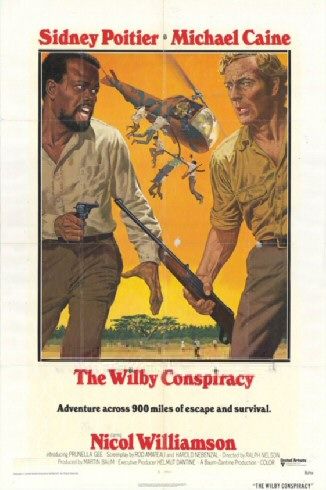 Poitier made his directorial debut with Buck and the Preacher (1972), followed by A Warm December (1973) and then the popular caper comedy Uptown Saturday Night (1974), which earned a sequel, Let's Do It Again, released in October 1975. Between the latter two films came The Wilby Conspiracy, released in July 1975. It was his first starring performance for another director since The Organization (1971), in which he reprised his role as Virgil Tibbs (from In the Heat of the Night and then They Call Me Mister Tibbs!).

Though the plot seems to harken back superficially to The Defiant Ones (1958), again teaming Poitier with a white co-star who constantly complains about the black man while they go on the run, Michael Caine could never be mistaken for Tony Curtis. His character wants nothing to do with South African politics, and definitely has little to no empathy for the black majority in the country and their treatment by the white minority.

After the release of Don Siegel's The Black Windmill (1974), discussed here, Caine starred in the crime picture The Destructors and then The Wilby Conspiracy.

The combination of Poitier and Caine is pleasantly combustible. Poitier is a strong man of strong convictions; Caine is 'the bloke who woke,' as might be said today. His engineer becomes embroiled far more than he wishes; all he wanted to do was spend time with his married girlfriend Rina, and instead he finds himself pursued and then tortured by two pernicious South African authority figures.

Nicol Williamson brings vile conviction and absolute sureness of his racial and moral superiority as Major Horn, aided by his nasty subordinate Van Heerden (Rijk de Gooyer). Noted for his brilliant stage performances, Williamson had not achieved screen stardom yet, so I can easily imagine that his lesser-known status chilled moviegoers even more back in the day.

Other gems in the supporting cast include actors making their debuts (of various types): Prunella Gee, a British stage and television actress making her big-screen debut in an appealing yet thankless role; Persis Khambatta, an Indian model turned actress who later gained widespread attention as the bald alien in Star Trek: The Motion Picture (1979), discussed (and argued about) here; and Rutger Hauer, who had already made an impression in Paul Verhoeven's Turkish Delight and looks fantastic here.

Rod Amateau (mostly known as a director, he also directed the action sequences) and Harold Nebenzal are credited for the screenplay, based on the second novel by Peter Driscoll; John Coquillon (Straw Dogs, Pat Garrett & Billy the Kid) photographed and Ernest Walter edited.

The Wilby Conspiracy "is, at heart, a good old chase melodrama," as Vincent Canby wrote in The New York Times, "decked out in modern dress and in liberated racial attitudes. The best thing about the movie, flimed mostly in Kenya, is its performances."

Nearly 44 years later, it's hard for me to argue any differently. So: recommended!

70s Rewind is a feature that ruminates on the less-heralded cinematic wonders of the past.