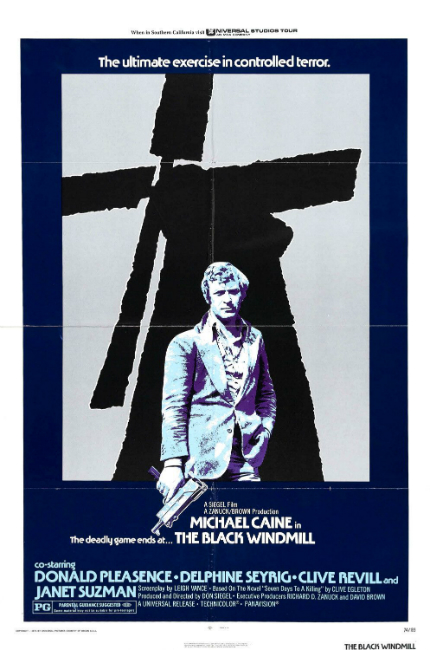 Will we need 40 years to appreciate fully the wonders of today's "minor" genre fillers?

Maybe so, to judge by the flood of films currently releasing in theaters and on streaming services, easily numbering into the hundreds in the U.S. and U.K.. So many films of every stripe are coming out, it's certain that more than a few gems are being lost, swept away into the sands of time without much notice.

We focus especially on strange, little films from around the world here at ScreenAnarchy, yet I'm well aware that it's beyond our capacity to cover every film that may be of interest. Our coverage choices are driven by personal passion rather than a slavish devotion to all the latest blockbusters.

Some of us, though, retain a great desire to see what Hollywood is producing. My personal taste was shaped greatly by the 1970s, the first decade in which I took greater interest in films. Even though I lived in Los Angeles, 'the center of the film industry,' independent productions were few and far between and I was barely aware of them. Instead, I saw what new releases I could at local theaters, and then happily began patronizing repertory theaters as soon as I secured my own transportation.

Before I could control my own destiny, so to speak, I pored over newspaper ads and took note of dozens of films that I wanted to see ... someday. One of those by dint of its title, was The Black Windmill, which was recently released on Blu-ray by Kino Lorber.

Michael Caine stars and Don Siegel directs, which, combined with my nostalgic memory of seeing the poster in a newspaper ad (above), proved sufficient to prompt a blind buy. Released on May 17, 1974, The Black Windmill didn't make much, if any splash, at the box office.

John Wayne kicked off 1974 as a cop in Seattle (McQ), followed by Frank Perry's moody crime film Man on a Swing; Gordon Parks' gritty NYC cop movie The Super Cops came about the month before. John Hough's Dirty Mary, Crazy Larry, starring Peter Fonda, was much more successful, and perhaps it captured better the anti-establishment mood of the times.

After enjoying box office success as Harry Palmer in spy thriller The Ipcress File (1965) and then earning an Academy Award nomination for Alfie (1966), Michael Caine got very busy. His subsequent films included two more Harry Palmer thrillers, The Italian Job, and Get Carter.

Just turned 40, Caine earned another Academy Award nomination for his lead performance opposite Laurence Olivier in Sleuth (1973). Offered the opportunity to work with director Don Siegel, Caine was reportedly happy to accept and enjoyed his experience. Coming off the huge success of Dirty Harry, starring Clint Eastwood, followed by Charley Varrick, starring Walter Matthau, Siegel could do no wrong. 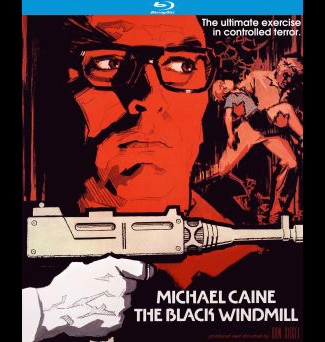 Or so it seemed until he ran into script issues on his next film. Based on a novel by Clive Egleton, several writers had tried and failed to complete a script to Siegel's satisfaction, but experienced television writer Leigh Vance came closest before the start of a strike by the Writers Guild of America. Producer and director Siegel was pressured by Hollywood studio executives to begin production without a finalized script, according to filmmaker and historian Mike Siegel, whose audio commentary is included on the Kino Lorber Blu-ray.

For my money -- I bought the Blu-ray -- The Black Windmill is a good film that I enjoyed thoroughly. As Mike Siegel points out on the audio commentary, it's more of a suspense drama than any kind of thriller, but it's very well-made and performed. Caine plays a chilly character, which is what I would expect of an experienced British espionage agent, even one whose son has been kidnapped and is being held for ransom. The spy's deeper feelers are manifested through his actions, which tend to be far more hot-blooded than his words.

Able support is provided by Clive Revill, John Vernon, Joss Ackland, Janet Suzman, Delphine Seyrig, Joss Ackland and Donald Pleasance. Catherine Schell adds a touch of glamour. In its content and its social context, The Black Windmill may indeed be a "minor" film, as Mike Siegel describes it, yet its style and professionalism are very satisfying to behold.

70s Rewind is a feature that ruminates on the less-heralded cinematic wonders of the past.

Do you feel this content is inappropriate or infringes upon your rights? Click here to report it, or see our DMCA policy.
70s RewindClive RevillDon SiegelDonald PleasanceJanet SuzmanMichael Caine