Toronto 2018 Review: IN FABRIC Is More Thriftshop Than Selfridges 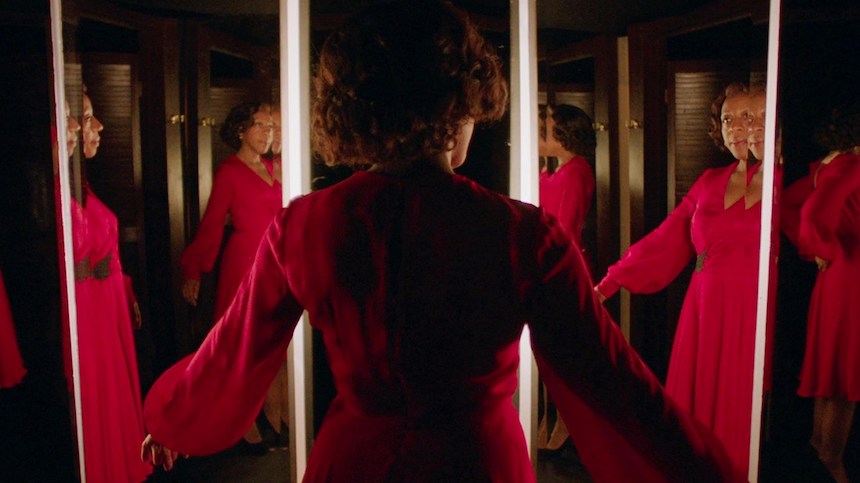 Any new Peter Strickland film is cause for celebration. The Berkshire auteur has consistently delivered some of the most delightful unease (and wicked humour) in cult cinema since 2009's Katalin Varga.

In Fabric is his most wildly fluctuating film, where the highs are pure joy, but there are some wibbly-wobbly points and an inscrutably repetitive third act. Perhaps, the equivalent of a pencil skirt might have fit better than the maxidress delievered here, replete with shoulder pads, sequins, and embroidered frills.

The sprawl may come as a surprise to cinephiles and genre-fetish aficionados, who were rightly enthusiastic about the director's razor sharp control of tone and atmosphere in his previous self contained, and highly specific, cinematic universes. Indeed, In Fabric is ardently in love with 1950s era department store environments, and the accompanying girthy catalogues that flip in the breeze like retail pornography. At times, the film feels like a kind of gothic Euro-sleaze reflection of P.T. Anderson's Phantom Thread, or, perhaps, a spandex and cotton riff on Halloween III: Season Of The Witch.

Mostly, however, it is a dialogue-burlesque of the retail experience. This is where the film offers its chief (and side-splitting) pleasures.

It has become apparent to me that Strickland's modus operandi is the comedy of discomfort. In Berberian Sound Studio, it was the psychological meltdown of Toby Jones's British sound engineer, who, in the process of generating and applying horror soundscapes to complete the Foley work on a Giallo picture is ground up in the culture-shock crucible of a toxic Italian workplace. Along with the punchline rich S&M body politics of the two women at the centre of The Duke of Burgundy, things are subtly (and maximally) mined for their droll situational humour.

The Duke of Burgundy used mannequins to interesting effect during that film's 'insect symposia' interludes, as a kind of mute surrogate audience. In In Fabric the mannequins have taken over the asylum...er...shop. The madame at Dently & Super's Department Store removes her hair at one point in the film to visually suggest that she is a living mannequin. At another point, she erotically washes a mannequin as a ritual of black magic transmorgrification. When not riding the stores dumbwaiter down to the dungeon, she is the queen of delivery for Strickland's esoteric retail jargon, the aforementioned highpoint of the film.

In Fabric is also a hyper-stylized and nostalgic loveletter to a type of shopping experience that has been in a slow motion death spiral since the internet swallowed everything and digested it into algorithmic, data gathering blob.

Meanwhile, divorcée single mum, Sheila, is contending with her twentysomething artist son who has moved his petulant girlfriend into his bedroom, where they engage in not-so-quiet sex all hours of the day. She is also trying to re-enter the dating pool via newspaper classified ads (the PlentyOfFish of its day) and contending with Strickland's crocodile-smile version of 'The Two Bobs' from Office Space at her day job as a bank teller. With all these things encroaching on her personal space she is very much on the ropes and at the end of her wits.

This may explain why she misses the flare-gun warning signs of her sales lady ("Be bold and your date will compliment you.") The striking red dress she purchaes is a way to reclaim her confidence and sexuality, which has been back-benched by motherhood and under siege by the complexity of divorce and single parenting. The date goes wrong in the most cringeworthy (read: British) kind of way. The dress gives her an ugly rash while her domestic life continues to evolve towards hell. And this is before the adding the whole 'animated dress of evil' element to the equation.

A little more than half of the film is commanded by the wonderful Marianne Jean-Baptiste (Secrets & Lies) and her pragmatic warmth, as seen in Sheila's second 'classified ad' date and also in the concerns she has about her sons particular form of hand-drawn art.

As Sheila enters the bonkers witchcraft-retail culture of Dently & Super's, she could not be further out of place. These scenes are elevated to '11' via Strickland's regular actress, Fatma Mohamed (in all seriousness, this Romanian actress is a treasure) and the way she positively 'hovers' over potential customers.

Throw in some some weird, but quirkily believable, 'local TV advertisements' for the store, the most loaded boardgame session Sorry in cinematic history and some forthright bitchiness from Gwendoline Christie (trading in her body armour for thick mascara and attitude), set to the beat of techno-ambiance outfit Cavern of Antimatter, and you have got yourself a Peter Strickland joint.

Unfortunately, the movie moves on to a questionable second chapter, one involving the upcoming nuptials of a washing repairman, who is forced to don the dress at truly the worlds worst bachelor party. Despite the idiosyncratic pleasures of washing-machine repair lingo - the kind which doubles as an ASMR lullably to sexual ecstasy and a counterpoint to terrifying set-piece of washing-machine destruction, this second half undermines the ebb and flow of the first, as Strickland endeavours to build a new set of characters and an entirely new scenario, leaving the witchy goodness of Dently & Super's or the humane charms of Shelia's travails, in absence.

In Fabric is a case of too much too far. Strickland's previous films bring the humour of extreme situations to a knifes edge, without shredding the hurlyburly atmosphere. Here the laughs are overt and naked. There is a self-awareness of the genres tropes to be sure, but it comes across as a tad too eager to please. In terms of his artisinal level of tease and retraint previously, the director's signature deadpan can only go so far here. The wooly plot begins to unravel and fray in the back half. This tactile promise of a 'haunted dress' is worthy of the best episodes of classic television anthology, from The Twilight Zone to Masters of Horror, but, when (shoulder)padded out to a feature is more stained than strained. Or is it the other way around?

Do you feel this content is inappropriate or infringes upon your rights? Click here to report it, or see our DMCA policy.
Department StoreDressGwendoline ChristieMarianne Jean-BaptistePeter StricklandSidse Babett Knudsen