Review: THE DUKE OF BURGUNDY, Universal Truths About Mating Rituals 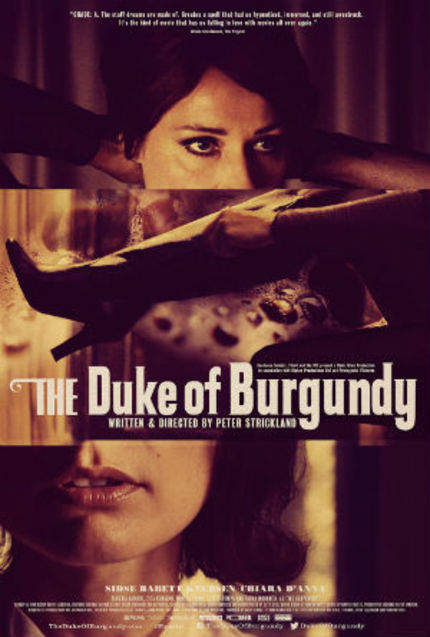 Starting off with what is undoubtedly the opening credit sequence of the year, Peter Strickland's The Duke of Burgundy never ceases to surprise and delight over its 100 minutes, offering a dry but meticulous humour and rhythm. Those credits, offering the promise of 'perfume by' and 'lingerie' by,' evoke a specific period of Euro-sleaze cinema from the early 1970s that was drenched in velvet, silk and hosiery (and undoubtedly all kinds of musk). Harpsichords and cellos abound.

In Strickland's previous film, Berberian Sound Studio, he took the mood and repeated patterns of the Italian Giallos to deliver a witty and uncomfortable workplace comedy. It was a film where a British man is driven mad simply by the culture shock of alien ungraspable protocols. It was terrifying, confusing and above all, funny as hell. Here he does a two hander in an oversized, lushly designed manor house in the country exploring the sexual politics of two women immersed in the protocols of their own passions. Their only break between shared intimacy is in the meticulous study of moths and butterflies, creatures who are nearly infinite in variation, aid in pollination, and whose rapidly pulsing wings sound more than a little like a vibrator.

Young Evelyn arrives to work as the housemaid for the matron of the house, who haughtily finds fault in every task; a master who is clearly power tripping. Everything is heightened as Evelyn brushes the carpets on her knees, hangs damp underwear up to drip-dry, or slowly polishes the barrel of the microscope in the entomology laboratory, where hundreds of glass cases of moths and butterflies pinned to velvet pillows. If you can take your eyes off the production design here, your sympathies might slide towards poor Evelyn, but things quickly get complicated as it becomes obvious that she is seriously getting off on the ritual. Body language and pregnant glances are the key to unlocking this picture, so keep at attention.

Like nearly every scene in the film, there is a punchline. It is amusing to watch this film with a large festival audience (I hope everyone gets a chance) as certain visual cues become apparent at different times for different people, giving an atmosphere of someone on the verge of laughter at any given moment, while others are intent on something entirely different. I won't give anything away, but suffice it to say, that as the film progresses, it gets murky, then clear, then murky again, in who is the slave and who is the master. The rhythms and cycles of The Duke of Burgundy echo the give and take between lovers. How far can things go before the proclivities of a partner begin to feel like a chore? When do the sexy outfits begin to be more constrictive than empowering? When does the purchase a human-toilet device start to feel like a compromise?

Strickland is fond of saying that he does not deal in metaphor, but comedy is association, and the image a moth pinned by its wings and displayed glass is ripe. As is a room full of handsomely attired women lecturing one another on the minutiae of cricket sounds and colour markings. No matter, there is mood to spare - the film is nothing if not fully immersive. But it also traffics in playfully obscuring its own sight gags. Be sure to pay attention to the slightly out of focused middle ground during the films several moth seminars with out loosing focus of all the passive-aggressive judgement throughout.

Observation and understanding create entertainment and pleasure, that works just fine even whether or not you are familiar with the genre Strickland is archly riffing on and reconfiguring. And boy, oh, boy those opening titles. For that matter, stay for the closing credits for further gems such as 'human toilet consultant' which are scattered throughout the text.

There is not a single man in The Duke of Burgundy, but the film doesn't need any to show us some universal truths about the species and its mating rituals. I can still smell the perfume.

The Duke of Burgundy

More about The Duke of Burgundy