Notes on Streaming: In the Fabulous AGGRETSUKO, Death Metal Enlivens the Working Stiff 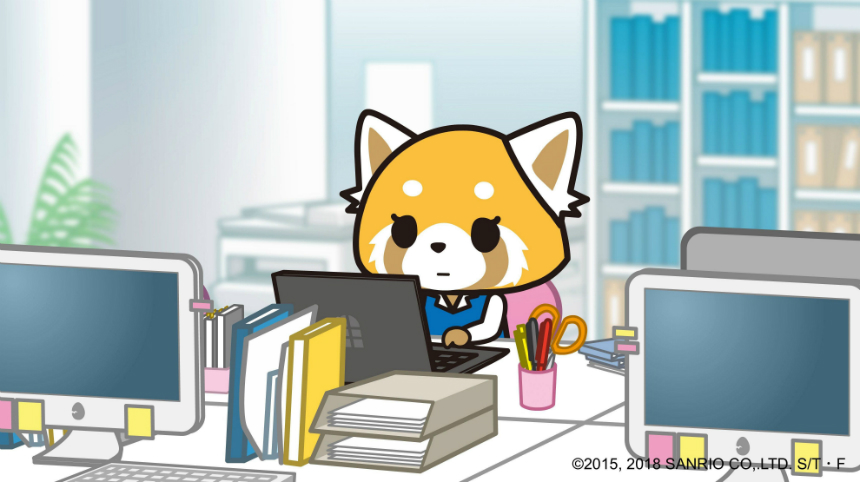 Five years after landing her first job, Retsuko, an angry red panda, is losing her will to live.

She is an accountant who faces daily, high-pressure demands from her superiors, as well as from her increasingly irritating coworkers. At the age of 25, the absence of any sort of personal life outside of the office threatens to drive her mad. Retsuko is friendly with two co-workers, the very practical Fenneko and the bashful Haida, a fellow who harbors a crush on her. Retsuko's sole relief is singing death-metal karaoke by herself on her way home from the office. In the small room, she transforms into someone else, releasing her pent-up tension and surviving until the next day

Aggretsuko, an animated series from the film division of Japanese company Sanria, known for Hello Kitty, is based on a character created by a designer known as Yeti, who does not wish to reveal her true identity. "I observed office workers who are at the centre of Japan's corporate culture and I could hear their heartfelt screams," she said, as quoted by BBC News. The series, consisting of 100 one-minute animated shorts, originally aired in Japan from April 2016 to March 2018.

The fabulous new animated series recently debuted on Netflix. It consists of 10 episodes, each about 15 minutes in length, and all directed and written by Rareko, who also directed the original shorts.

The series features a blunt style of animation, extremely colorful and to to the point, with minimal fuss; it regularly flies off into an impressionistic rage or syrupy romance or pure, fanciful fantasy. It's the sort of thing that an office worker might doodle on a napkin during a rare break in the day, or what an exhausted brain might dream up late at night as sleep becomes elusive.

It is, to put a finer point on it, entirely relatable to anyone who has ever held down a desk job and felt enslaved, or dealt with an irritating colleague or a pompous boss or simply imagined a bit more freedom. Or anyone who could sing along with Peggy Lee on the immortal "Is That All There Is?"

As a veteran of the office wars at various extended portions of my life, I found the show to be instantly relatable. The characters are recognizable, in a similar way to the great Office Space (1999), in that even the most officious sorts of people (or animals, in the case of Aggretsuko) are shown to be imperfect and struggling, just like the rest of us.

What rises above and courses through the show, which flies by in very addictive manner, is the riotuous comic sensibility, which made me laugh and laugh and then cry from laughing, because I really ought to know better, but it's so funny that I couldn't help myself.

If you've never worked in an office, you may still find the workplace in this show to be universal in its non-appeal, mixed with fiery characters you want to see survive and thrive, somehow.

I love this show.

All 10 episodes are now streaming on Netflix.