Notes on Streaming: THE PUNISHER, Geysers of Blood, Torture and Violence 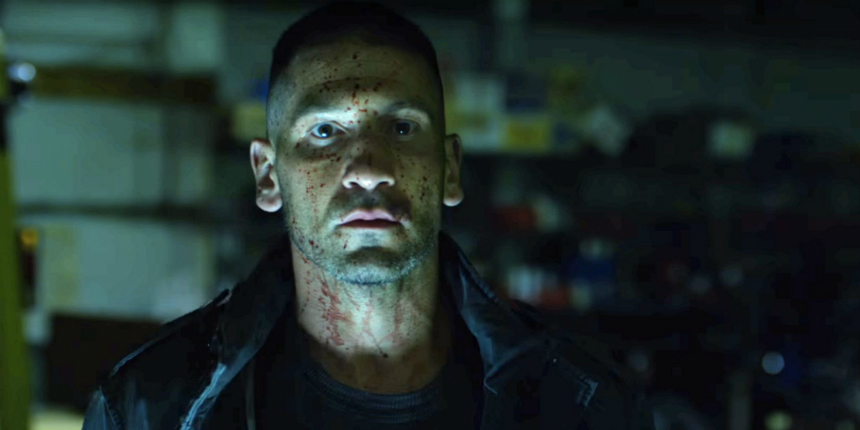 After sampling The Punisher, Marvel's latest small-screen series, I shared my reaction on social media: "Unrelenting brutality of Frank Castle + extreme bloodshed through 3 eps. is wearisome." Boy, was I wrong -- I vastly underestimated the capacity for torture and violence that's on tap in the remaining 10 episodes of the series, now available on the Netflix streaming service.

Dramatically speaking, the structure of the series is the usual usual from the Marvel stable on Netflix. Introduced in the second season of Daredevil in 2016, this particular iteration of Frank Castle, a merciless, murderous character who first appeared in comic book form in 1974, is a nasty vigilante whose actions and approach served as an effective counterpoint for Daredevil's non-murderous, 'do no permanent harm' vigilante.

As played by Jon Bernthal, Castle is a grunting, guttural creature who is single-minded in pursuit of criminals to kill. Gradually, we learn that his family was murdered and he is still seeking those responsible; that is his primary motivating force. I found his guest appearances to be quite effective in the context of the show, changing things up and prompting Daredevil to question his own methods. At the conclusion of the season, Castle's death was faked and he escaped into hiding.

Now he has burst forth into his own series, and what felt bracing and fresh, spread out as one of several storylines in a supporting role throughout multiple episodes, quickly becomes depressing and tiring when the focus is entirely on him.

Part of this is the nature of the character. In the Marvel comics, Frank Castle was (originally) a police officer in New York City whose family was murdered because they witnessed a mob hit. In The Punisher, Frank Castle is a military veteran who received special forces training and returned (briefly) to his loving family before they were executed for something connected to him.

Thus, Castle manifests a greater degree of self-loathing, since he holds himself responsible for the loss of his loved ones. As a military veteran who wanted to serve his country, he was loyal to a fault, even though he gradually came to the conclusion that he was being exploited as a puppet for the questionable goals of his superior officers. He was trained to capture, torture and execute supposed enemy combatants upon command, becoming inured to the pain and suffering he was inflicting.

His past is explored after we learn that he's tracked down and executed vengeance against the criminals he holds responsible for the death of his family. In the present day, he is living in Queens, New York, under an assumed name, still tortured by painful memories. When a mysterious man known as Micro threatens to reveal his true identity, Castle is prompted to spring back into action.

But that doesn't begin to describe the relentless brutality of Frank Castle's actions. In his merciless execution of dozens and dozens of people associated with the criminal lifestyle -- perhaps all evil and irredeemable, though in his role as judge, jury and executioner, he doesn't bother to investigate or question his own judgment, ever -- he has become his own commanding officer, but one with a death wish, ordering himself to kill as a permanent solution to the criminal problem, with the surety of his own death in the near future.

A few individuals escape his immediate wrath. Micro (Ebon Moss-Bachrach) proves to be a helpful ally, thanks to his computer expertise and past government intelligence service. He too faked his own death, but the difference is that his wife and two children are still alive in the city. He has hooked up an elaborate surveillance system to keep watch over them.

Castle is outraged that Micro would try to protect them by pretending to be dead, and he demonstrates his self-righteous outrage -- 'My family is dead! Yours is alive! How could you do that to them?' -- by becoming close to them, especially Micro's wife Sarah (Jaime Ray Newman). Of course, he is trying to assuage his own guilt about not being able to protect his family from violent execution. The parallel situations between Castle and Micro -- conveniently, both with similar family units of a wife and two children -- is explored to rather predictable exhaustion.

Castle is also pals with former military veteran Curtis Hoyle (Jason R. Moore), physically disabled in wartime and now a counselor. Castle's best friend during the war, Billy Russo (Ben Barnes), enters the picture as the leader of a successful private military operation, though it takes a while for the two to reestablish contact.

Instead, Billy makes the acquaintance of Dinah Madani (Amber Rose Revah), a Homeland Security agent who has been brought home from Afghanistan. Born and raised in the U.S., she is of Iranian descent, but identifies as American. She wants to pursue an investigation into corruption that she began in Afghanistan, but Castle eventually appears on her radar. She is assisted in her work by Sam Stein (Michael Nathanson), an ambitious junior agent.

As a crossover from Daredevil, Karen Page (Deborah Ann Woll) appears, most often to suggest that a remnant of humanity still resides in Castle's soul. She also spends a fair amount of time expressing the sorrow that Castle surely feels deep inside.

Frank Castle, though, will not allow himself to outwardly express anything but angry retribution. The series reflects that, early and often, and since emotions are sometimes difficult to see (though Bernthal is terrific at seething and sneering) creator Steve Lightfoot and his writers and directors choose to depict that angry retribution by way of geysers of blood and endless moments of torture.

The series runs 13 episodes, but the twelfth episode is the one that turned my stomach. As a seasoned horror movie fan, I've seen a fair number of things that I wish I had never seen, but I also understand that it's part and parcel of many sub-genres of horror.

This is not a superhero show, unless Frank Castle's unusual tolerance of pain is meant to be his super power. Instead, The Punisher argues that Castle is a victim of governmental authorities and should not be held accountable for his actions.

Of course, this is undermined by a storyline about a military veteran named Lewis Wilson (Daniel Webber) who is having trouble adapting to life out of the military. He too is a victim of governmental authorities, but he is definitely held accountable for his actions and suffers greatly as a result.

In its desire to make serial killer Frank Castle an antihero, The Punisher endeavors to justify his actions, thus reducing him to a cartoon figure. That often works in the brief bursts of comic book storylines, but in the extended world of a Netflix limited series that encourages binging, it quickly becomes oppressive and ugly.

The Punisher is now available on the Netflix streaming service.

Do you feel this content is inappropriate or infringes upon your rights? Click here to report it, or see our DMCA policy.
Amber Rose RevahBen BarnesEbon Moss-BachrachJon BernthalMarvelNetflixSteve LightfootThe Punisher

More about Netflix's The Punisher

More about The Punisher