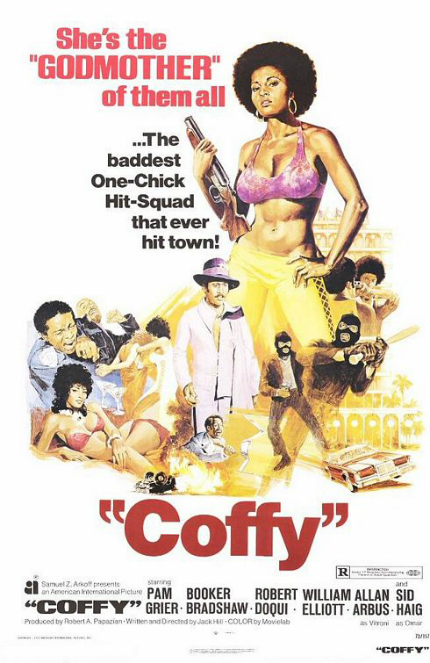 In Atomic Blonde -- read our review here -- Charlize Theron proves herself to be quite deadly as an MI5 undercover agent during the Cold War. In Coffy, released in June 1973, Pam Grier proved herself to be the most deadly nurse ever.

Introduced as a seductive junkie in the back seat of a limousine, Coffin (Grier), known as Coffy, is the type of woman who gets right down to business. Just a few minutes into the movie, she's already blown a drug dealer's head off and pinned it on his henchman, to whom she's given a lethal dose of heroin.

Call it poetic justice, call it whatever you like, but Coffy is angry and doesn't have time for any pretty words. She's recently discovered that her 11-year-old sister has been shooting up with tainted heroin and is now permanently brain-damaged.

Before anyone can say she should wait for the authorities to act, she's already (justifiably) concluded that she has to take justice into her own hands, not just for the sake of her sister, but for her people in general, who are continually victimized by the white men in charge of, well, everything.

In retrospect, it's easy to figure out that by the time her sister ends up permanently damaged, Coffy has already been pushed to the edge. As a nurse in a city hospital, she has, no doubt, already seen the effects of years of victimization, including "the needle and the damage done," as Neil Young sang about heroin addiction, a song that was released about a year before Coffy erupted into theaters.

Of course, writer/director Jack Hill was not a social activist, he was a filmmaker, and so when approached to make a movie about an African-American woman's revenge, he agreed. (Watch the Trailers From Hell video below, in which Hill talks about the genesis of the project. Wikipedia claims that Larry Gordon, then head of production at American International Pictures, had lost the rights to make Cleopatra Jones and wanted to beat it to market.)

Hill began his career as a film director in 1960, and he made films fast and cheap, with titles like Spider Baby, Fear Chamber and Pit Stop. In 1971's The Big Doll House, a briskly entertaining 'women in prison' flick, he worked with Pam Grier for the first time. (The actress appeared in a quick followup, Women in Cages, though without Hill as writer or director.) Hill and Grier reteamed for The Big Bird Cage, in which Grier took firm command of the lead role in another enjoyably lurid picture about ladies behind bars.

Grier co-starred with Bernie Casey in George Armitage's Hit Man and then returned to prison in Black Mama White Mama before escaping in the company of revolutionary Margaret Markov. The latter was another example of a film that was far more vibrant than expected because of Grier's magnetic personality. Then the opportunity to make Coffy arose, and naturally Grier was the perfect choice to play the titular role. 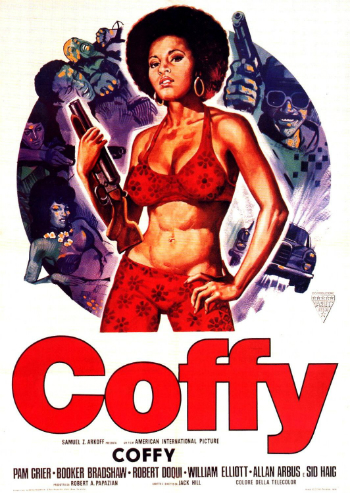 I've watched Coffy twice before and I've always been impressed by how Grier enlivens the film, simply by her presence. She has a terrific screen persona that still translates very well; it's easy to root for her because she exudes a tremendously righteous and charming personality. It's not that everything she does is laudable or praiseworthy or, to be honest, even all that righteous; it's that she is convinced she is doing the right thing, the only thing that she can be expected to do in that circumstance.

In Coffy, she had a very good collaborator in Jack Hill. He's been praised, quite rightly, for his abilities as a director. This time around I especially enjoyed the variety of framing he employed and, as always, his uncanny sense of pace, which is relentless and rarely pauses for a beat longer than necessary. But he was also a very good screenwriter, parceling out good lines around the cast while developing his lead character(s) to the point necessary. And the concluding scene with a bitter Grier and her disappointing councilman lover is aces.

I also enjoyed Sid Haig for his affectless performance; he starred in Hill's very first short, The Host * and frequently appeared in the director's films thereafter.

It's true that the film features an over-abundance of female nudity, which places it firmly in the exploitation genre. The excuse would likely be, 'that's what was expected for this kind of picture at that time.' On the plus side, Grier stars as an empowered woman who rarely relies on anyone else; she has absolutely no hesitation about pulling the trigger, either in her own defense, or, more frequently, to exercise harsh justice according to her own sense of right and wrong.

Hill and Grier reunited for Foxy Brown, another more than worthy entry in the then-burgeoning Blaxploitation sub-genre, and then went their separate ways. Hill made three more films, two of which are above-average (The Swinging Cheerleaders and Switchblade Sisters). The third, Sorceress, was reportedly recut by producer Roger Corman and Hill asked that his credit as director be removed. Soon after, he retired from the film business.

Grier continued with Blaxploitation (Sheba, Baby; Friday Foster) until it died from overexposure. She received plaudits for her performance opposite Richard Pryor in Greased Lightning, but lead roles dried up and she was reduced to much smaller parts, even though she continued to refine her talents. See, for example, her fine performance in Above the Law (1988).

She has continued working, but even her glorious star turn in Quentin Tarantino's Jackie Brown did little for her career. By that time, she was also facing Hollywood's age prejudice. She did, however, make the most of her role in TV's The L Word over 70 episodes.

In his outstanding book Opening Wednesday at a Theater of Drive-In Near You: The Shadow Cinema of the American 70s, published a little earlier this year, Charles Taylor devotes an entire chapter to Grier, Coffy, Foxy Brown, Blaxploitation and much more, putting things into historical, cultural, and artistic context. He writes in regard to Grier: "One of the paradoxes of the movies is that you can be a star -- by which I mean you can display all the charisma and commanding presence and style that marks you as born to be in front of a camera -- and never break-out of second-rate movies or get the roles that you deserve. ... For all the pleasure there is in watching Pam Grier ... there's no escaping that she never had the career she should have."

Coffy remains rough and dirty and fabulous and memorable, an intentionally unpolished star in the firmament of great low-budget and disreputable films that happily littered the 1970s.

* Correction: The filmmaker kindly informs us that his UCLA student film with Sid Haig was titled The Host. My apologies for the error.

70s Rewind allows the writer to ruminate about his favorite film decade.

Do you feel this content is inappropriate or infringes upon your rights? Click here to report it, or see our DMCA policy.
70s RewindBlaxploitationJack HillPam Grier

Thanks so much for your kind comments. My UCLA student film with Sid Haig was entitled The Host, in case anyone might be interested.
-- Jack Hill

Thank you for the kind correction, sir! Please accept my apology for the error. By the way, I just saw PIT STOP for the first time, which is also terrific, and features another wonderful performance by Mr. Haig.

What a great pick for 70s Rewind. Ultra fun flick. The 70s were a great time for cinema.