Review: In ATOMIC BLONDE, Charlize Theron Breaks the Glass Ceiling By Punching Through the Berlin Wall 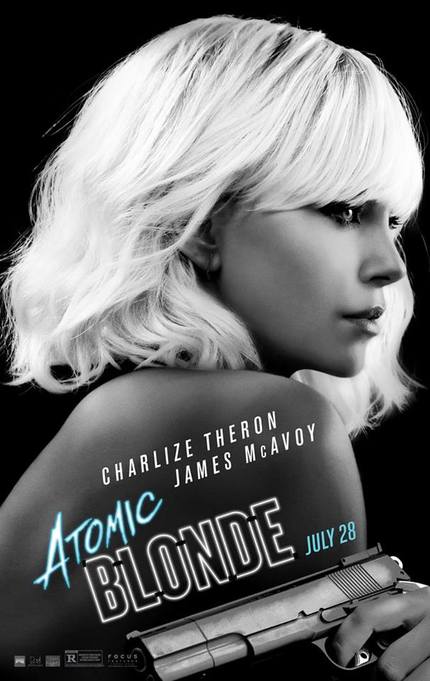 I love a good espionage thriller, and what better setting than the fifty year Cold War between the Western democracies and their deadly enemies in the Communist East?

This underground conflict has bred some of the most magnificent films of the last fifty years, not only through individual flashes of brilliance like The Spy Who Came In From the Cold, but most famously the longest running continuous film series out there, the adaptations of Ian Fleming's James Bond novels.

It's no wonder that filmmakers continue to go back to that well, as it's an easy place to imagine a world of spies and assassins that very few people actually saw. There is a magnificent amount of artistic license afforded Cold War films becauase there is no real basis for comparison to reality for the vast majority of moviegoers.

When you go back to that particular setting over and over again, however, it's to be expected and demanded that you bring something new to the table, and with David Leitch's solo directorial debut, Atomic Blonde, they seem to think they've done it. They're half right.

Lorraine Brougton (Charlize Theron) is a British spy at the end of the Cold War. A week from the fall of the Berlin Wall, her superiors send her on a mission to acquire a black market master list of every spy, secret, double and triple agent in the world and every crime they've ever committed before it finds it's way into the hands of the evil Commies.

Of course, the list is hidden in Berlin, the epicenter of all Cold War dramas, and so Lorraine is off to the divided city to meet up with her local contact, David Percival (James MacAvoy), to wrap up this search and rescue mission before anyone is the wiser. As one might expect, things do not go according to plan and the deceivers quickly become the deceived (and then back again, over and over) and things go pear-shaped.

Atomic Blonde has a few major selling points, most of which I would say it handily delivers on. First and foremost is the introduction of Theron as action hero. A couple of years ago Theron's Furiosa in Mad Max: Fury Road stole the show and put her on the top of the female action hero list, but in that film her impact was mostly due to a steely intensity.

In Atomic Blonde, Theron becomes more like a John Wick-ish world class ass-kicker, actually showing some fighting chops in several fight scenes that are far more brutal than women usually get the opportunity to play. In fact, as far as American films are concerned, I would say that very few women have been given the license to kill that Theron's Lorraine has in this film, and that's a pretty cool reason to get excited.

Director Leitch also co-directed John Wick and co-founded action designers 87Eleven, who did the choreography for Wick among many other films, so the fighting styles feel very familiar. If you're a fan of those films, you're in for a treat,; we get more of the realistic brutality of the Wick series in the bountiful action sequences, but there is a little bit of something missing.

I don't know if it's because a lot of the action takes place in confined spaces -- stairwells, small hotel rooms, tight alleys -- or limitations of the lead performers, but the fights feel very choppy. Attempts to hide cuts within action sequences are not altogether successful, which made this action fan do more than a little guessing as to which angles were Theron, and which were a double.

That's not a good thing. Using a double for a brutal fight scene is nothing new and nothing to be ashamed of, but the viewer shouldn't notice, and maybe the casual fan won't, but I definitely did.

There is also an almost obnoxious commitment to reminding the audience when the film takes place through a constant barrage of pop culture touchstones, mostly music. I like the music of the late 80s as much as the next guy, but in the case of Atomic Blonde it frequently feels forced, especially when - as in the case of Ministry's Stigmata as reinterpreted by Marilyn Manson and composer Tyler Bates - it's just wrong.

The 80s are the new hip retro trend, with everything from Nicholas Winding Refn's Drive and Neon Demon to ultra indies like The Guest wringing the decade for every last bit of nostalgia. I do like that we get a Cold War thriller set in the dying days of that clandestine conflict, but it all feels very on-the-nose.

For all its minor faults, Atomic Blonde's attempt to essentially recast James Bond as a woman works pretty well. Unlike the Wick films, Lorraine isn't a complete loner on a mission of vengeance and looking to get out, she's a career badass who enjoys both the job and the perks with equal enthusiasm.

Theron plays her character as a woman who enjoys the company of her lover as much as she enjoys pushing a razor blade through a man's cheek, and that's actually kind of cool. I think the problem is that the film doesn't know if it wants to be Bond or Wick, and falls just short of both, though it does so with some style.

At a touch past forty, Charlize Theron could be approaching the age at which Hollywood typically starts to back away from casting her in lead roles, but with the one-two punch of Mad Max and Atomic Blonde, she definitely proves she's a force to be reckoned with. Men have been doing it for decades, from Lee Marvin to Charles Bronson to Bruce Willis to Keanu Reeves, and it's about damned time that a woman gets to strut her stuff, and Theron takes advantage.

Atomic Blonde isn't a great film, but it's definitely a fun film. Those expecting wall to wall action might be a bit disappointed or even confused by all of the espionage double and triple crossing that bloats the film a bit at 115 minutes, but it's not without its ample action-y rewards. I dug it.

Do you feel this content is inappropriate or infringes upon your rights? Click here to report it, or see our DMCA policy.
charlize therondavid leitchjames macavoy